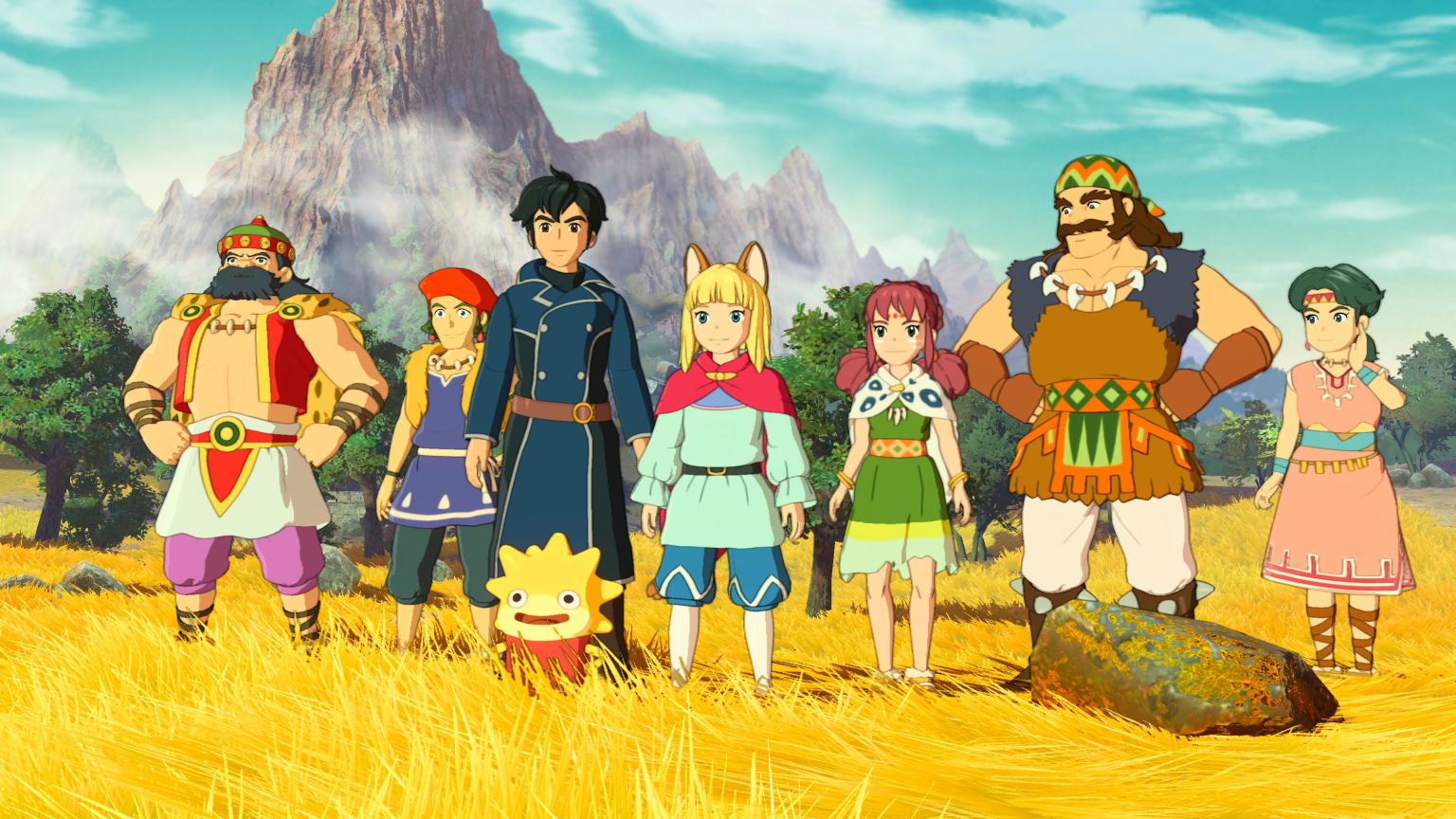 Well I hope you are well-hydrated (at least if you live near me!) because here comes the hellscape known as July & August. The kind of weather where you open the front door and step into a wall of heat and humidity that drapes over you like a (hot) lead blanket and makes you instantly and consistently miserable.

The only sane solution is to stay indoors in the A/C and play games, watch TV and read! I wish I could convince our Lola that this was the case, but dogs will be dogs. (In truth it gets so hot that even SHE doesn’t want to be outdoors any more than absolutely necessary.)

Anyway, on to the recap!

I played a little more of I Am Setsuna, which I’d started in May. In the end I bounced off it. It seemed like a nice enough little game but the lack of any kind of map killed it for me. If I had been focused on just playing Setsuna this probably wouldn’t have been as much of an issue, but dipping into it once a week meant I could never remember where anything was so I’d spend too much time just wandering back and forth across the “overland” looking for the town/instance/dungeon I was supposed to go to next. Compounding that frustration was the very slow rate of movement in the overland. There seemed to be no reason for this; there weren’t random encounters or anything. At least not in the part of the game I played. In the end I decided there were better titles vying for my attention. Didn’t hate it, didn’t love it.

I finished Eiyuden Chronicle: Rising this month. I have a whole post about that.

Akiba Strip: Undead & Undressed was another old game I had on the PS5’s hard drive, moved over from the PS4. I can’t recall if this was a PS+ freebie or just a super sale I was curious about, but it came out in 2013 and it was a port from a PS Vita or PS Portable title. It’s a game about being a vampire (sorta) fighting other vampires (sorta) in Akihabara. Vampires are tough though so you can’t hurt them in the traditional sense. Instead you have to tear their clothes off, at which point the sunlight will make them go poof.

This might have been intended as a fan-service game but the quality of the graphics means it all comes off more silly than salacious. Your enemies never lose their undergarments and they dissolve pretty quickly after you strip them. I’d say fully looting bodies in Skyrim is overall more NSFW than this game gets. I liked the characters and their banter, maybe because I hadn’t been watching any anime lately. They’re all delightfully otaku, mostly obsessed with manga and rare action figures, but somehow also fighting vampires (sorta). Side missions are sometimes goofy tasks like helping a shy guy get the courage to ask a girl out. Weapons and armor are all common items. The best weapon I’d found before I quit playing was an old laptop. So yeah I’d hit someone in the shirt with a laptop until the shirt got weak, then I’d tear it off. It’s all quite ridiculous.

Unfortunately each ‘area’ you enter is tiny and there are constant loading screens as you traverse the city. They’re pretty quick but still…so many loading screens. More seriously, I found that actual combat to be not very good, and the whole time I was running around a Japanese city brawling I was thinking I could be doing the same thing in a Yakuza game and probably having a better time. The novelty of the whole aesthetic wore off after a couple hours and I decided I’d had enough of that one for now.

Watching the Obi Wan Kenobi series put me in a Star Wars mood which led to me trying Jedi Fallen Order for a 3rd or 4th time. I wrote a post about how I finally found myself enjoying it and I finished it a few days after writing that post. In the end I got pretty hooked on the story and the characters and now I’m looking forward to the sequel. With the story finished, though, I felt no need to stick around and chase Achievements or anything. Still, it was a very enjoyable time.

Ni No Kuni 2 is another PS4 game that’s been on the hard drive for a long time. This one I remember buying for like $7 during a Black Friday sale or something. I never finished the first Ni No Kuni; I just got bored with it. Not sure if it was the fairy tale setting, or the lack of challenge. My memory of it is tons of combat that became really routine and dull. Ni No Kuni 2 swaps the turn-based combat for an action-RPG kind of system. It still isn’t very challenging but at least every battle doesn’t feel exactly the same. We’ll see how far I get; I’m currently at 12 hours or so and finding myself booting it up less and less frequently.

Far Cry 6 wound up warranting its own post. I haven’t booted that one up since that post. Time to either get back to it or uninstall it.

Marvel’s Avengers got a new hero, Jane Foster Thor, so I reinstalled it. I own this on PS5 and have it on Xbox via Game Pass. For some reason I installed it on both consoles. Weird thing is, I like it a lot better on Xbox. I can’t put my finger on why. Maybe it is just because I am earlier in the game on Xbox (I’m just now doing the Kate Bishop operation.) Everything just feels smoother on Xbox for me. Maybe it’s the haptics on the PS5 controller? I should try turning those off.

My biggest issue with Marvel’s Avengers is that it is so damned big. It’s weird that the era of SSDs has once again made hard drive space precious, but that’s the world we live in. I wound up uninstalling it from the PS5, but so far it’s still lingering on the Xbox, but not sure for how long.

I feel like overall I’d enjoy this game more if I could just play with my character and maybe 1 AI teammate and have the difficulty scale accordingly. Having 3 AIs running all over the place gets so chaotic I get frustrated. Nothing like triggering an ability just as a team-mate knocks your intended target across the map. Really though, this game was made for multiplayer, so not really made for me.

I finished up The Last Kingdom. I have that snooty “the books were better” feeling towards the series. Actually I felt like Seasons 1-3 were pretty authentic. Each season drifted farther from the books but they still felt right. Seasons 4-5 just felt like a different series with a character that happened to have the same first name. It no longer seemed like Uhtred’s story. It was enjoyable, just different. It didn’t feel like Danes vs Saxons any more, with a lot of archers with Legolas-like skills, and crossbows of all things. Plus England started to feel like it was maybe 2 miles across, the way characters bounced from town to town at will. The books are historical fiction. S1-3 of the series felt kind of like historical fiction. S4-5 just seemed like a fantasy series with no magic.

I expected Stranger Things to be not-great. I was wrong. But it ended on a cliffhanger. The good news is, the second part of the season starts July 1st. Hopefully the quality stays high.

Ms Marvel is a show that has really surprised me. I knew I’d watch it because, y’know, Marvel super hero stuff. But I didn’t expect to love it as much as I do. I just adore this show and want to give it a big warm hug.

Obi-Wan Kenobi was OK, but for me just OK. I think knowing that so many of these characters were going to be around for Episode 4 drained a lot of the tension out of the show. I mostly am curious as to why the meat on that gigantic carcass doesn’t spoil in the twin suns of Tatooine.

DOTA: Dragon’s Blood (Netflix). Here’s a show with a great cast and…nothing much else to recommend it. I watched 2 seasons and still don’t really understand what the heck is happening. This one was a waste of time.

Deep Space 9 is still our lunchtime viewing. We’re in the Dominion war now; second to the last season. I am missing the interplay betweeen Odo and Quark in this season, but we see a lot of Garrack who I enjoy as a character. Weird thing about this series is it’s all the non-Star Fleet characters I like best. The main crew… meh, I can take them or leave them. Except for Nog, who gets really likeable once he (spoilers!) joins Star Fleet.

The Toys That Made Us is a documentary on Netflix examining the history of toys like Barbie, GI Joe and Star Wars. It’s pretty fun if you pick the episodes about brands you can relate to, though after a while the stories start to feel very similar. Still, I enjoyed the episodes I watched.

That’s a lot of TV and that’s not even everything. I’ve been gaming less and less as I cast about for something that really hooks me, and as a result of that my TV viewing is going up and up.

I finally finished Abaddon’s Gate, the 3rd (?) in The Expanse series. I’m now kind of mad at the authors because of some comments they made on Twitter, though. I don’t follow them; I’ve learned not to follow people who create the art I enjoy. Ignorance is bliss; I don’t need to learn they are asshats. Anyway I don’t follow them but someone I know retweeted a comment that got my nose out of joint so I’ve slowed down my reading of these books. It wasn’t even anything terrible, just an off-hand comment about how us old people are all evil. I’m pretty sure I’m not evil.

Instead I’m back to reading ancient Marvel Comics on Marvel Unlimited. The last time I talked about reading Marvel Comics someone left a comment showing me this: https://cmro.travis-starnes.com/reading-order.php and I’m using it now. The site has been reworked so when you click on Read Online on the details page, it’ll open that comic in the Marvel Unlimited app. At least, that’s how it works on the iPad I use for reading Marvel Unlimited. That makes things so much easier and I’ve been getting such a kick out of these old comics from back when times were simpler and them Commies needed to be stopped at any cost!

And that’s the endless recap. I’ve really been in a gaming funk lately. I keep starting games and immediately losing interest. I need something to just bowl me over and for me to obsess over. Or, y’know, to get an actual life and do something besides sit on the couch every night!!!