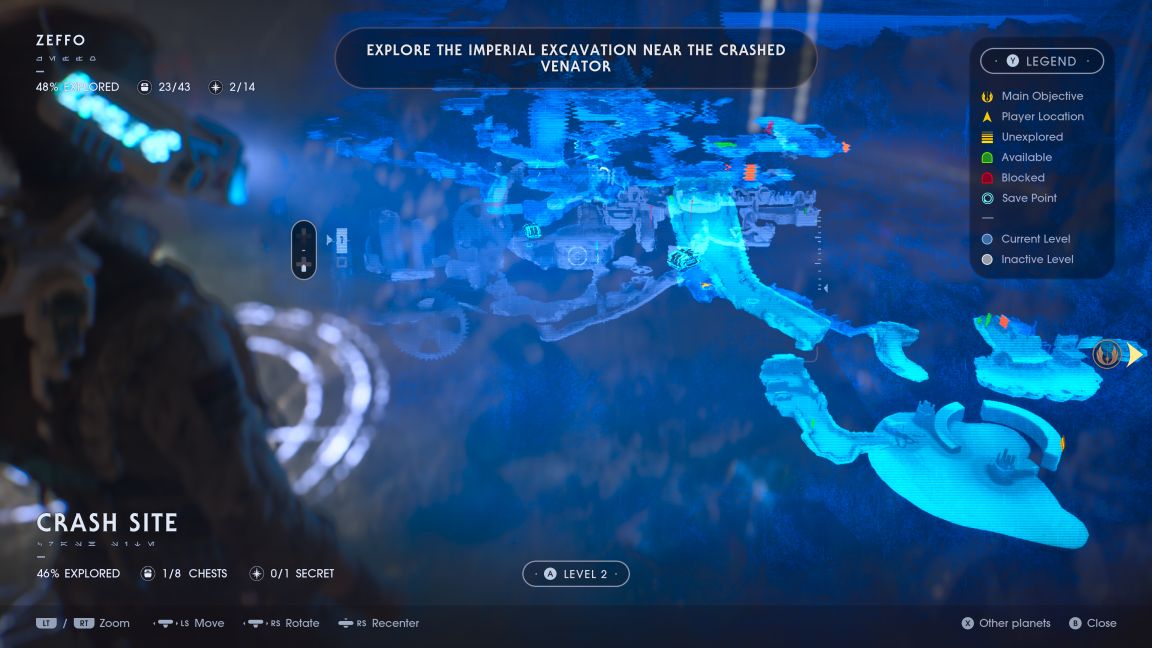 We’ve been watching the new Obi-Wan Kenobi series, which has put me in a Star Wars mood. That led me to firing up Jedi: Fallen Order, a game I have a not-great history with.

I played it at launch on PC thanks to being an EA Pro (?) subscriber at the time. I got a ways into it but I was more or less hate-playing it. When the EA subscription expired I was fine leaving Fallen Order behind. Eventually it made it to Game Pass on the Xbox and I tried it again and quickly bounced off it.

So what bothered me so much about this game?

1) The actor. There’s something about Cameron Monaghan I just don’t like; I think he must remind me of someone from my past that I had a bad relationship with. I didn’t like him in Gotham (where he played the proto-Joker) and I didn’t like him here. Not the game’s fault and for that matter, not his fault. It’s just a thing.

2) The map. Oh that map. It gave me a headache and I constantly felt lost. (See image at the top of this post.)

3) The rewards: Nothing depressed me more than solving a puzzle to get to a chest and having it give me a new super ugly and cosmetic-only poncho or something. And I never saw the point of customizing my light saber either, aside maybe for the color. It’s not like I ever look at it.

But still I gave it another try because what other Star Wars game did I have handy and… I’m liking it this time! Quite a bit actually. So what has changed?

1) I guess I’m over my dislike of Cameron Monaghan. Maybe I’m just used to him? I still don’t have warm fuzzy feelings towards him, but looking at him no longer makes me angry like it used to.

2) I finally noticed you can toggle between layers of the map. This makes it marginally better tho it still frustrates me.

3) The rewards still suck but I guess now that I know I’m going to be disappointed it doesn’t bother me as much.

4) This is the big one: Bloodborne happened. A while back I played through a good chunk of Bloodborne (which, for those who do not know, is a for-real Souls game from From Software), basically following a video walkthrough to help manage my frustration levels. Doing this kind of made the whole Souls-like environment feel a little less foreign and a little more rewarding. This is by far the biggest reason I’m enjoying Fallen Order this time around. I now expect to have to backtrack and revisit areas and I get excited when I find a good shortcut or something. Also compared to other Souls-likes Fallen Order’s difficulty is much lower. I’m also exploring more (because now I know that’s what you do in a Souls-like) which has led to me having more tools earlier, which also helps with the difficulty curve.

I spent the bulk of last weekend playing Jedi Fallen Order and thinking about it when I wasn’t playing it. This was super surprising to me.

I guess it just goes to show you that you should never write-off a game forever. What you like today and what you like in a year or two can be completely different things.