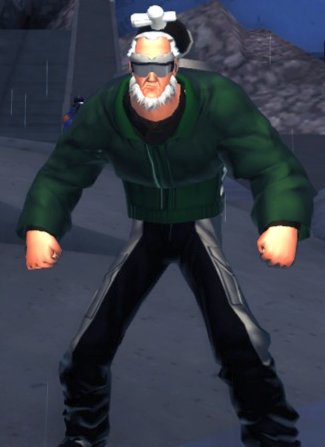 When you peeled back all the layers, Bill Biggs was just a lonely old man. It’d been 15 years since the cancer took his wife Betty, and their only son (and his family) had been in Detroit when Doctor Destroyer attacked. They were among the countless casualties. Bill was the last of his line.

Bill stayed on in their little house on a cul-de-sac, but he didn’t get out too much. When folks dropped by to visit he was cordial but distant, and after a while, people didn’t bother to visit anymore, unless they were selling Girl Scout cookies or bringing around a petition to get a traffic light installed, in which case Bill would order 2 boxes of Samoas or sign his name…whatever was asked. Bill was a fine neighbor; he was just content with his peaceful, quiet life alone and didn’t have much need for company.

But then the neighborhood started to change. Folks he knew moved on, and new families moved in. Families with lots of young children. Children who shouted and ran and screamed and sang and played all day. The noise got to Bill, who by this time had become very set in his ways and wanted nothing more than to sit quietly on his front porch and watch the days slip by. Whenever the childrens’ games spilled over onto his property, Bill’d lurch out of his chair and and holler “Stay in your own yard!” It wasn’t that he didn’t like kids…he just didn’t like the noise they made.

As Bill grew older, keeping up the house grew difficult and the place started looking rough around the edges. The lawn went unmowed, weeds invaded the garden, paint started to peel. Getting around became difficult as his strength deserted him. The house gathered an air of abandonment around itself, and the kids started to whisper about the crazy old man who lived there. Then the pranks began, first at Halloween (Bill always had a bowl of candy ready, but these days no one ever hit him up for tricks or treats anymore) and then more and more often. Harmless stuff, really. Prank phone calls. Ringing the doorbell and running. Bill mostly shook his head and put up with it. He’d been a kid once, too. Long, long ago.

One hot August night, there was a freak meteor storm. The sky was full of green streaks of light. Many of the rocks managed to hit the ground. The authorities quickly charted every impact and, with no explanation of what was going on, they safely disposed of the debris. Well, not every impact. They missed one.

A group of kids were playing in the old quarry when they found a pile of green-glowing goo. It stank to high heaven. One of then, a particularly malicious 14 year old named Frank, got the idea to use it in a prank. Using an old board, they scooped up the goo and put it in a brown paper bag. Later that night, Frank crept up onto Bill’s front porch, doused the bag with gasoline, set it on fire and rang Bill’s doorbell. Then he retreated to the bushes to watch the fun, while a small group of younger kids watched from the street.

Bill opened the door to find this flaming parcel on his porch. “I ain’t falling for that old trick” he muttered as he reached for the broom he used for sweeping leaves off his porch. He caught a whiff of the odor. “What in hell have you been feeding your dogs?” he shouted into the darkness. He beat at the flames with his broom, cursing because he figured after this he’d have to buy a new one. But this wasn’t dog poo, and the fire was stubborn. It started to take on a green hue. Bill beat at it more vigorously, wrinkling his nose at the stench. Thick, oily green smoke curled up from the burning parcel, its tendrils seeming to seek Bill out. He was wheezing now, the green smoke in his eyes and his mouth. He inhaled it and wretched. His strength failed him and he fell to his hands and knees, burning his arms. He couldn’t catch his breath. His clothes started to burn, but with his last energy he rolled, finally extinguishing the flames. He was covered in green goo, burned, gasping for air.

Most of the kids, including Frank, ran away, but one little boy was brave enough to run up to Bill. He knelt by the old man. “Inside the front door…” gasped Bill. “Phone. Call 911.” The boy immediately ran inside and called for help. Then he came back out and took Bill’s hand and sat with him until the ambulance arrived. By that time, Bill had slipped into a coma.

Six months later, a nurse doing her daily rounds entered the room where Bill Biggs had lain quietly all this time, and found his bed empty. He’d shown no signs of recovery; hadn’t said a word or twitched a finger since the night of the incident. Now suddenly, he was gone without a trace.

Two days later, a commuter train’s brakes failed. It was running out of control, tearing down a long slope as the track wrapped around a mountainside. The engineers radioed for help, knowing it was only minutes before one of the cars jumped the track and pulled the whole train into the valley below.

Then suddenly a figure was on the tracks ahead. It appeared to be an old man. The engineer blasted the train’s whistle, but the old gentleman didn’t move. To the horror of the engineer, the train smashed into the old man. The engineer felt the jolt of the impact and a distant part of his mind wondered at how an old man’s body could cause that. Then the train shuddered, and slowed. Slowed some more. And finally came to a gentle stop. The engineer peered out the windshield and there on the tracks below stood the old man, dusting off his hands. The track was torn up; a pile of railroad ties lay stacked up haphazardly behind him.

The engineer leaned out the window. “How did you do that!?” he yelled. The old man just shrugged, turned and started walking down the tracks. “At least tell me your name!!” the engineer yelled. The old-timer turned back, chuckled a bit and said “Just call me Cantankerous.” Then he turned and, with a giant leap, he was gone.

For some reason, the idea of an old codger playing a tanking role tickles me.  Unfortunately in Champions Online, character names are in all-small-caps, so the emphasis on “TANK” in his name doesn’t translate.

I probably should’ve made him pure Might, but that seemed boring, so I gave him Might and Martial Arts, which means his primary stats will be Strength, Dexterity and Constitution.

The costume was pretty easy. I decided to focus his strength on his upper body, so I first I tried to make an old man’s body. Gaunt face (and using one of the Old Age textures Cryptic provides) receding gray hair, crazy bushy eyebrows and and unkempt shaggy beard. I shortened his arms and made his legs thin and weak. But then I expanded his chest and the thickness of his arms: all his toxic-space-waste strength is in his upper body. I kept the muscle sliders down…I didn’t want him to have a 6-pack.

Clothing was easy too. A pair of huge sunglasses like so many old folk wear when they’re outside, a Miami-style windbreaker and tacky pants. Then his air tank on his back, because sometimes CanTANKerous needs a toke or two of oxygen. He *is* nearly 90 years old, after all.

On the mood tab, I took the 2nd to the last stance (I’m forgetting the name at the moment), which makes him run around kind of bent over. It’s perfect for an old man going flat out, in my opinion.

On the off chance CanTANKerous gets played far enough to get a Nemesis, his name will, of course, be Frank. I didn’t tell you in this story, but when they were scooping up the toxic space waste, Frank got a small cut on his finger and some of the goo got into his bloodstream. Over the years, it did its dirty work…but in what way, I’m not yet sure.