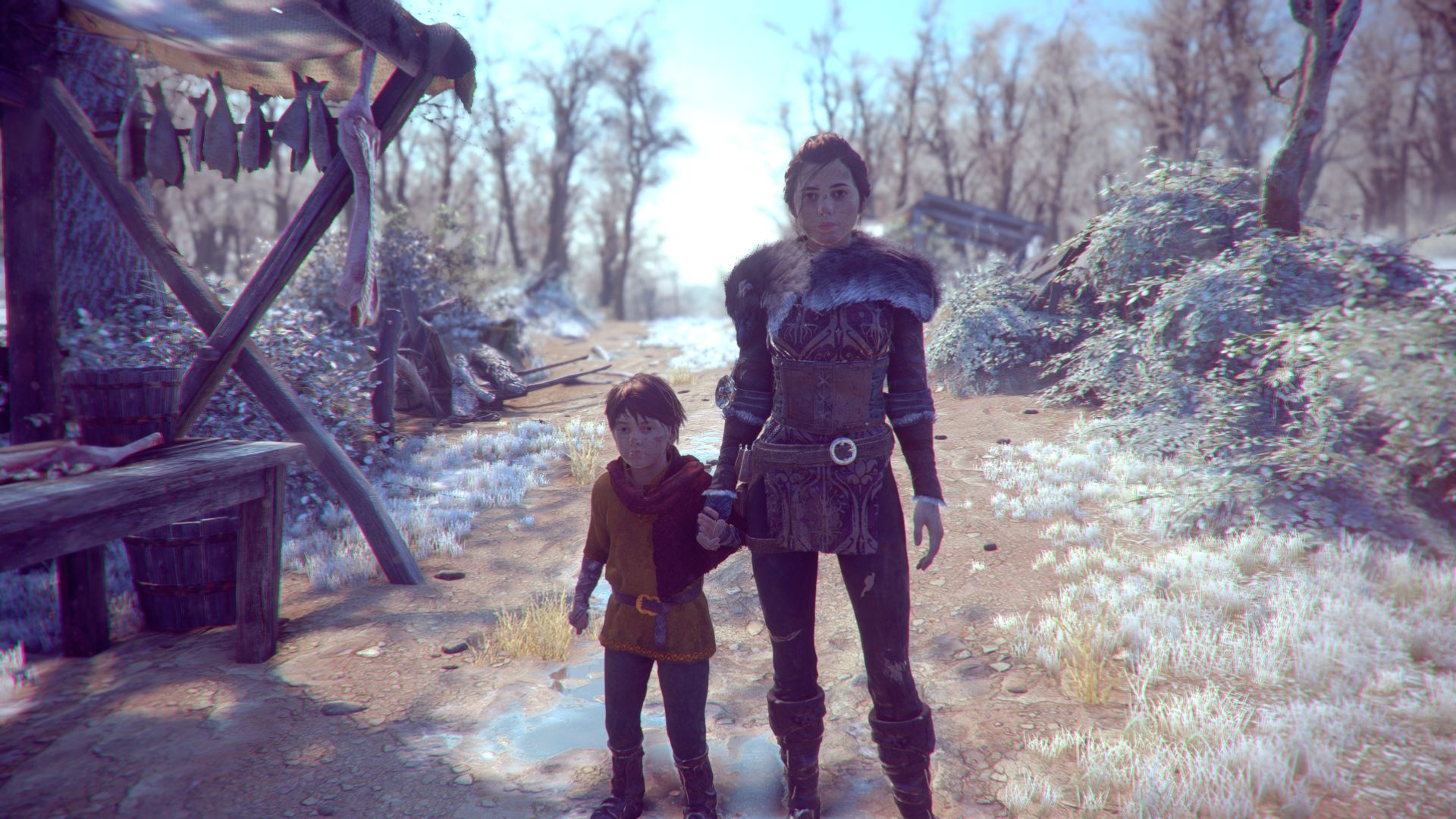 I mentioned my issues with A Plague Tale: Innocence in my weekend recap but wanted to expand on them in this post.

So first a bit about the game. Plague Tale takes place in an alternate history France in the 1300s. You mostly play as Amicia, a teen-aged (I’m guessing 15 or 16?) girl who is suddenly tasked with protecting her 5 year old brother Hugo. A plague (called ‘The Bite’) is ravaging the land, and the Inquisition is out in full force hunting for Hugo for reasons unknown.

The plague takes the form of demonic rats. There are LOTS of rats and they’re so very, very hungry. Thousands of ’em and they have but one weakness: they are afraid of light. Amicia is armed with a sling and over the course of the game she learns how to make special ammo for it: shots that ignite smoldering fires, shots that douse lights, and so on. As she travels through the game world she has to guide Hugo along by holding his hand. If he is left alone for too long he’ll start to panic, making noise and drawing enemies to the pair. At least that’s what we’re told. I was too good a big sister to ever let him get to that point.

OK so that’s the as-spoiler-free-as-possible setup.

The game is strongly narrative-driven and is not open world. Stripped of story, you are generally tasked with going from Point A to Point B in a level, though the animations of the characters, the excellent voice acting and the world building hide that exquisitely. The first half of the game is just *chef’s kiss* amazing.

In terms of mechanics, a lot of the game is essentially puzzle-based. You see a swarm of rats…how will you get past them? Can you light a fire by using your special ammo? Can you distract them by offering them a meal of some kind. Can you just avoid them? The further in you go the more complex the puzzles get, but the more tools you have to solve them. I found this all really fun. Fun, but really dark. Sometimes the meal for the rats is an enemy soldier. Actually a lot of times that’s the case. The various sling ammo types reminded me of Thief: The Dark Project, if you remember that game.

Amicia is a 15 year old girl with a sling and the beginning of the game leans into that. She has no interest in killing people and she’s not skilled enough to do it reliably anyway. But the farther you go, the more combat there is, and in the last chunk of game Amicia is like some kind of sling-wielding super-hero taking out enemies left and right. Not only did this kind of ‘cheapen’ the character for me, but the game’s mechanics (at least on console) just don’t offer a great combat system. As you wind up a sling shot your targeting reticle will ‘lock on’ to an enemy’s head, or the lantern they are carrying, or some other hotspot. Let fly and you hit. But sometimes it won’t lock on. Sometimes it ‘loses’ the lock just as you release. Sometimes it locks onto the wrong thing. This all makes combat less than satisfying so the more the game relies on it, the less gratifying the overall experience becomes.

You choose your ammo type from a weapon wheel (again, this is the UI on consoles). This feels sloppy, and you can’t re-arrange the ammo. So (again trying to stay as spoiler free as possible) there are times when I frequently wanted to use the item at 3 o’clock on the weapon wheel followed quickly by the item at 7 o’clock. I would have really liked to have been able to re-arrange these items so they were next to each other, but there was no way to do that. When the wheel is open (and obscuring your view) the game slows down a tiny bit, but not nearly enough. There isn’t an indication of what ammo type you have selected until you start your wind up to throw. I frequently died because I thought I had selected the right thing, but when I’d start Amicia’s wind up I’d realize my selection was wrong. By that time the enemy has closed the gap and boom! Dead. No time to change to the correct item, and you can’t effectively run/dodge while using the wheel (at least, I couldn’t). Amicia doesn’t have hit points. If an enemy strikes her, she dies.

Anyway, you get the idea. Putting so much emphasis on fighting at the end of a game where combat isn’t super polished or really the focus just totally busted the pacing for me. There was also a too-long pure stealth mission, and a mission where no matter what you did you would fail to some extent. Of course you, the player, doesn’t KNOW you’re expected to fail so I restarted that section so many times and got so frustrated trying to take out what I guess is an endless number of enemies.

Just in case I was missing something I checked around on places like Reddit and yeah, I wasn’t the only one cursing about the combat at the end. It may be that none of this is an issue on PC and that’s why it hasn’t been mentioned much. I just thought so much of the enjoyment of the game rested on the story, but the devs ruined the story by making the gameplay at the end of the game so cumbersome and frustrating that the pacing of the narrative was destroyed. I don’t know why they would do that.

There’s a sequel, A Plague Tail: Requiem, coming in 2022 and I hope they can keep the amazing storytelling of Innocence while addressing the flow of the end game. I’m willing to give them a second chance.

One thought on “More About A Plague Tale: Innocence”