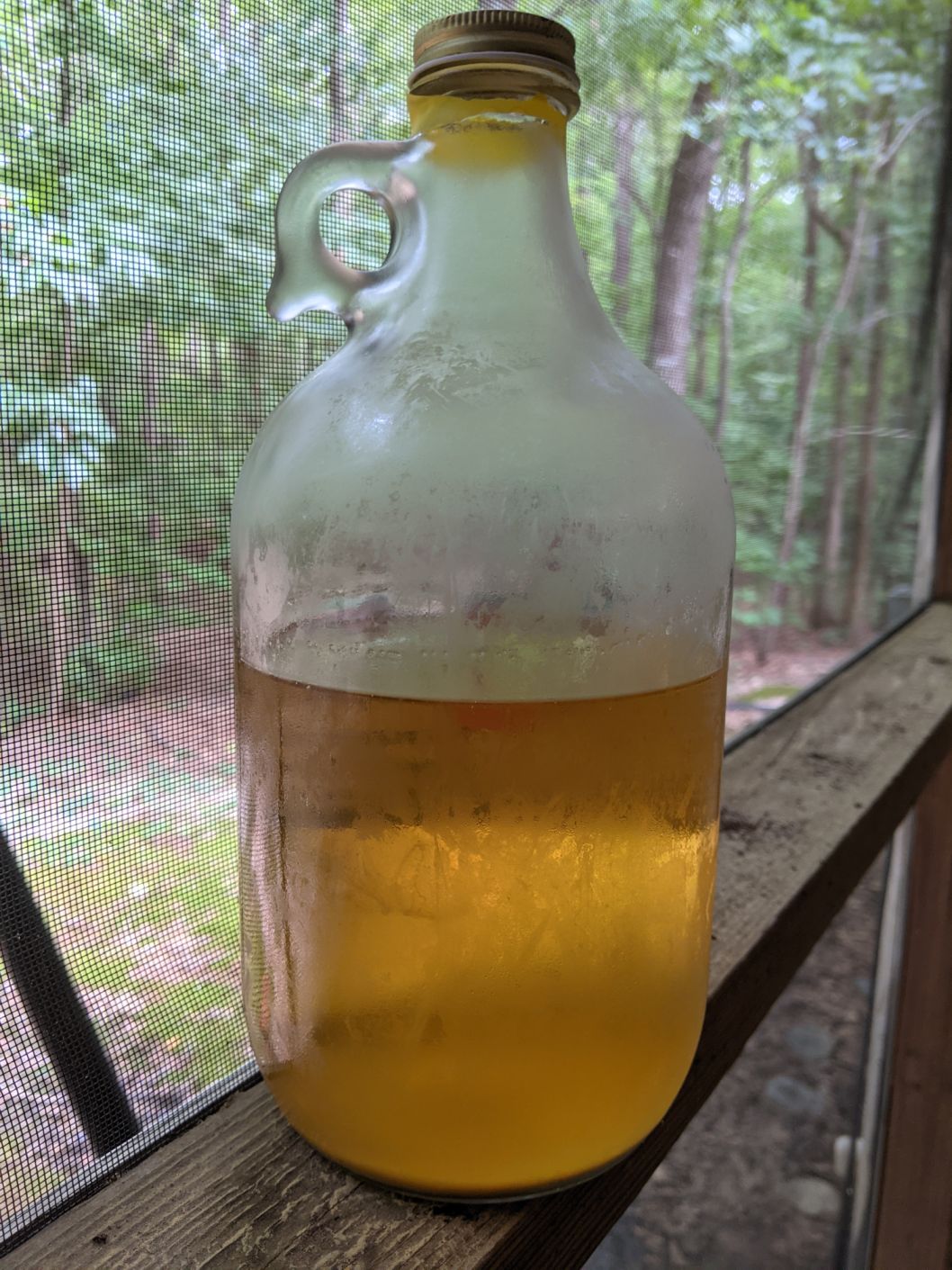 Back in the middle of Blaugust when I was desperate for a topic that I could turn into a quick and easy post, I shared a few of my favorite YouTube channels. One of them was Townsends, a channel about life in 18th century North America. At lot of the Townsend videos focus on cooking and food preparation and while I find them interesting, most are not interesting enough for me to try to make them.

One exception was Switchel, which Jon Townsend calls “An 18th Century Energy Drink.” Here’s the video:

My first attempt was drinkable but not great. First, my ground ginger was ancient and not very potent and it was the end of a jar and I barely had a tablespoon. End result: not a lot of ginger flavor. Second…I think I don’t really like molasses enough for this recipe.

For attempt two I used local honey instead of molasses and I had a new jar of ground ginger. I started with warm-ish water to help dissolve everything. This time it was pretty good right after mixing, but still not quite sweet enough so I added an extra dollop (that’s a technical term) of honey. Shook it all like mad to get the honey to dissolve in the now cold water. That tasted better, but when it really got good was after a few days in the fridge when a lot of the ginger settled out leaving a very clear drink, about the color of apple juice.

I really enjoy it, though due to the vinegar in it I don’t guzzle gallons of it. There’s a bunch of info on the web about how apple cider vinegar is good for you, but I don’t know how much I believe of what I read. I do, however, enjoy the taste & fragrance of vinegar (properly diluted, of course, and really you notice the vinegar more in the smell than the taste) and I feel like it does help keep my gut happy. Maybe a little acid is good for all the bacteria living in there. Who knows?

And I really like having a cold drink where I know all the ingredients that go in it. Same could be said for home-brewed ice tea or lemonade, for sure, but beyond those drinks (and good old ice water) most of what I drink comes from a factory of some kind somewhere.

Since making this Switchel I’ve discovered there are a ton of recipes for it online. Some of them are fermented, many use fresh ginger, some swap the vinegar for lemon or lime juice. This one from Townsends is one of the simplest and while I may try others, there’s something to be said for spending 5 minutes to throw together half a gallon of refreshing beverage. Bonus points for it being pretty darned cheap to make, too.

[About the header image: I tried my best to get one of those ‘beads of sweat dripping down the side of the jug’ shots but all I managed in the time allotted was fogging that just makes it look like I’m drinking from a dirty jug. I now have great respect for food photographers.]

4 thoughts on “I Made Switchel”