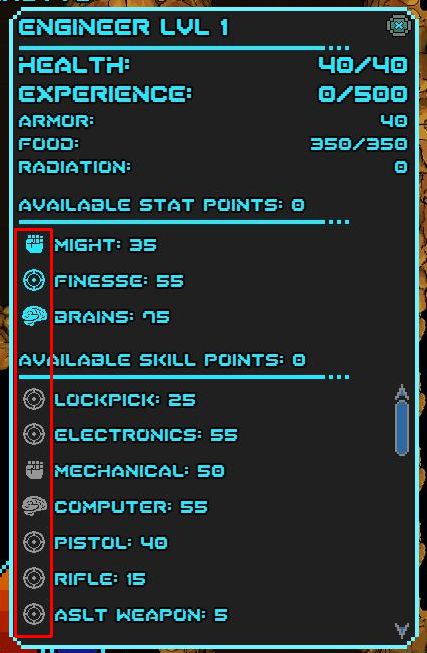 I just wanted to follow up on something I got completely wrong on my last post about Sword of the Stars: The Pit.

I griped about not knowing what statistic impacts which skills. I was looking for some kind of textual pop-up menu or something to explain this to me, but developer Kerberos Productions reached out to me on Twitter to point out I wasn’t seeing what was right in front of my face. Stats and skills each have an icon that indicates how they’re connected. I’ve highlighted the column of icons in this screenshot.

Turns out I was way off! Next time I dive into The Pit I’ll be better prepared!

Thanks to Kerberos for the help.

Once again, you can get The Pit for $8.99 at GamersGate or download the demo from the game’s website. 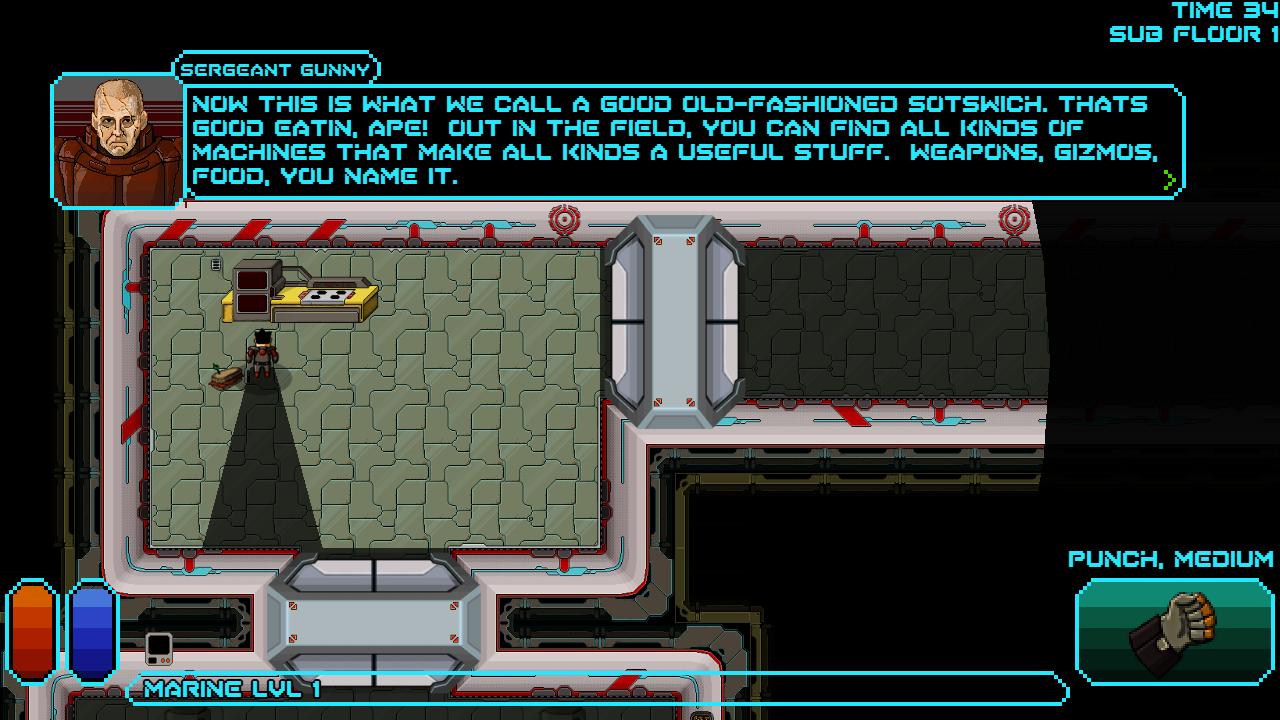 When a game contains “Sword of the Stars” in the title, the first thing you think of is space, right? Ships and planets and mining and tech upgrades…SotS is an established space-based 4X IP.

So the first thing I have to tell you about Sword of the Stars: The Pit is to forget all about that. The Pit is actually a sci-fi based roguelike. It is set in the SotS universe, but don’t worry if you’ve never played those games (disclaimer: I haven’t… crazy right?); that’s all just for flavor. The story, if you must know, is that a plague is turning the entire population of a planet into ghouls and the only hope for a cure lies at the bottom of a fabled pit in the Feldspar Mountains where the Suul’ka (I guess if you’re a SotS player you know who the Suul’ka are) once had a base.

So off you go, you brave Scout or Marine or Engineer you, to delve deep in an attempt to find the cure.

This is an old school rogue game. Turn-based combat, random effects on consumables, permadeath (actually I haven’t died yet but I’m assuming it has permadeath) and a constant tension between your two primary resources: health and food. Health slowly regenerates over time, but as it does, hunger grows, and food is scare in the pit.

If you don’t like Roguelikes, stop here. There’s nothing about The Pit that is going to change your mind. If you do like them, read on.

The Pit has a ton of stuff in it. You’re constantly scrounging resources and finding machines that you can use to craft those resources into something usable, in theory. Your first problem (besides all the beasties and bots that want to end you) is that many of these machines are damaged. Luckily you have a chance to repair them. I’ve been playing a Scout and she’s not great at repairing these things and more often than not they go from “Damaged” to “Ruined” when she tries. I suspect the Engineer is better at this, and I fear the Marine is probably damned near hopeless.

Which brings me immediately to my biggest gripe with The Pit. Your stats are never explained. You can guess that Strength influences melee attacks. Brains probably helps with all the crafting skills, which leaves Finesse to control how accurate you are. But I’m just guessing and I’d like to know for sure. Update: I got this bit completely wrong. See this post for details but the short version is that stats and skills all have icons to indicate how they are inter-connected.

Same with Skills. Does the Melee skill only influence bare-fisted punching, or does it also enhance the Knife and Blade skills. Speaking of which, what’s the different between “Knife” and “Blade” anyway? I was ‘born’ with a Knife..maybe there are swords in the game only I haven’t found one yet?

Not a deal breaker but it’d be nice to know this stuff.

I like a good Roguelike and so far I’m liking The Pit an awful lot. I’ve only gotten down to level 7 (of 30) and my Scout is level 6, and I’m playing on Normal level (2nd of 4 in increasing order of difficulty). The first couple of levels were a little easy but I still had my moments.

There’s nothing quite like the heartache of having your weapons and armor damaged badly, finding a broken repair station and, in attempting to bring it online, ruining it completely. After that happened I took to using my fists on a lot of the easier enemies since I’ve only got this one knife and if it breaks I’m screwed. I do have a couple of pistols of course, and so far ammo isn’t a huge concern, but as a roguelike player, your instinct is to hoard things.

Like grenades. I was hoarding every frag grenade I found. Then I stepped on a trap that destroyed my entire supply of frag grenades? Fiendish! What kind of evil mind came up with that? Stranger still, some traps have beneficial effects, like speed boosts or even heals.

For the more ‘serious’ roguelike players, there might actually be too much stuff going on. You have to collect or discover recipes to craft with (I’m guessing those are the same from game to game) and in addition to the potions with random effects that most roguelikes have (here called serums) there are bio mods for both weapons and armor that likewise have random effects. In my game so far I’ve consumed a purple serum that knocked my Brain stat down two points permanently, a black armor bio mod that bumped up the armor rating of a piece of gear by 10%, and a black weapon bio mode that improved the weapon’s durability by 20%.

A few aspects do set The Pit apart from the other roguelikes I’ve played. First, when you level (at least on Normal difficulty) your health returns to 100%. That makes things a lot easier. Every time you level you also get points to use to increase your main attributes (Strength, Precision, Brains) and your many skills.

Second, the game incorporates a field of view mechanic. Monsters can sneak up on you if they approach from your blind spot (which is fairly small). The tried old roguelike mechanic of running away gets more tense when you can’t see if the monster is still chasing you, and if it’s gaining on you!

If I’ve piqued your interest, there’s a six level demo that you can try out, or if you want to jump right in, the game is only $8.99 on GamersGate. That’s an introductory price that’s good for a week. After that it’ll be $9.99.

Oh, and there’s a tutorial that’ll teach you how to play. It features an annoyingly abrasive ‘drill sargent’ and mostly you won’t need it to learn how to play, but it does give you a glimpse of what you can expect as you venture deeper into The Pit. The first couple levels are pretty basic.

Hey, I tried making a video… this is the first time I’ve every tried to narrate a game I’m playing and I had both technical and performance problems (turns out I don’t multi-task well) but dammit, I made it, I’m gonna post it!

A little while later…