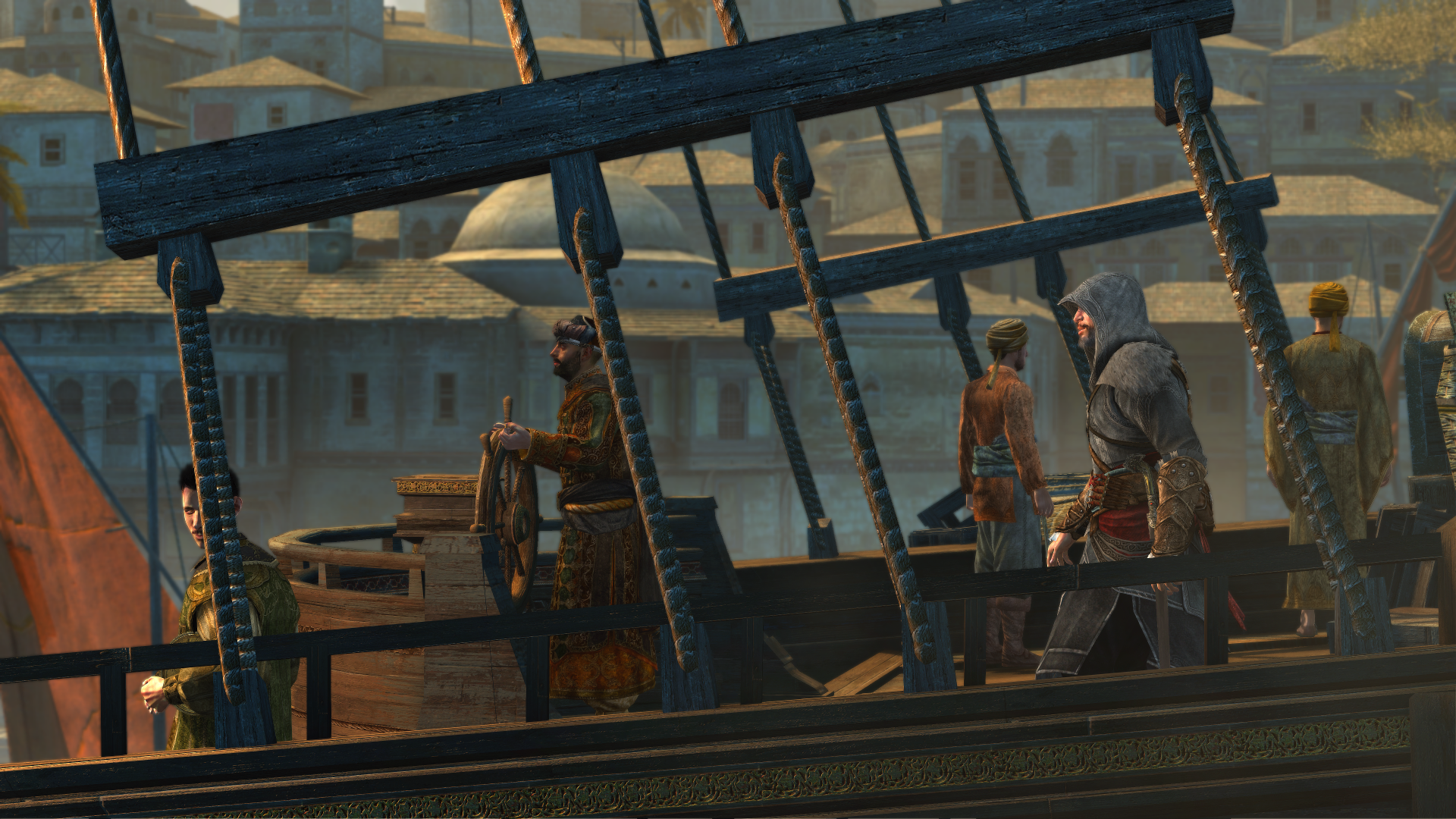 It took me like 3 weeks to play through Assassin’s Creed II and two days to finish Assassin’s Creed Brotherhood. Part of the reason is that ACB is somewhat shorter, but mostly it was because I was hooked on the story and skipped a lot of the side missions. Plus it being a long, lazy 4th of July weekend didn’t hurt, either.

I liked AC Brotherhood a lot. I liked how it continued the story of both Ezio and Desmond in a very “chapter 2” kind of way. This time around Ezio stays in one city, Rome, but it was large enough that I didn’t find that to be a problem. They also greatly expanded the system of upgrading your infrastructure. In AC 2 you spent money to improve your villa. In ACB you’re improving all of Rome. At the start of the game the Borgias have Rome in a vice-grip but Ezio and his fellow assassins can take back control by killing the Borgia Captain who controls a district, then putting a tower to the torch. Once that is done you can spend money to renovate stables, blacksmith shops, tailors, art dealers and the like.

The more shops you renovate the more income you earn and the larger the discounts you get. It was a fun system but I would’ve liked to see it taken even further. Aside from income there didn’t seem to be any gameplay benefit to renovating the districts. Fortunately my OCD just enjoyed improving districts for the satisfaction of doing it.

Another cool system was being in control of the assassin’s guild. You run around and save citizens from the Borgia, after which they join the guild. You then send them out on missions to level up and bring back goods and gold. If you’ve playing Black Flag it was like the system that let you send ships out on missions. The better part of the assassin’s guild was being able to call on them to help you. Target an enemy and hit L1 and suddenly from out of nowhere your assassins appear to take out that target. That NEVER got old.

I really enjoyed Ezio’s part of the story. Desmond’s was just so-so. I’m having trouble relating to Desmond (he’s the guy in present day who sits in the animus to relive Ezio’s memories). Part of the problem is that he’s voiced by Nolan North who uses the same voice he used for Nathan Drake. In fact there’s a section of the game where Desmond and Lucy (voice by Kristen Bell) are climbing through a ruin that felt very reminiscent of Drake and Elena (voice by Emily Rose) moving through Uncharted. It felt kind of unsettling to me.

Anyway, glad I played it. I have a lot of side content I can (and may) go back to still, but once the credits rolled I jumped right into Assassin’s Creed: Revelations. And honestly, so far I’m not feeling it. ACB felt like the end of Ezio’s story and so far Revelations kind of feels like an extended epilogue. Ezio is in Constantinople so we’re dealing with a fresh cast of friends and enemies. They’ve also changed a lot of the controls just enough to drive me crazy. L3 is now used where Triangle used to be, for instance.

They’ve also added bombs to the game. Ezio and craft and toss bombs, and at least early on there is a huge emphasis on this. Bleh. I played through most of ACB with a big-ass 2-handed weapon, cleaving my way through swarms of enemies. Now I’m supposed to hide and lob bombs? I say again, bleh.

Worst of all, they’ve managed to wedge a tower-defend mini-game into Assassin’s Creed. Ugh ugh and UGH. If I wanted to play a crappy Tower Defense game there are plenty to choose from. Hopefully I don’t have to do that too often.

We’ll see though. I’ve only got a few hours into it so far. Maybe it’ll get better.