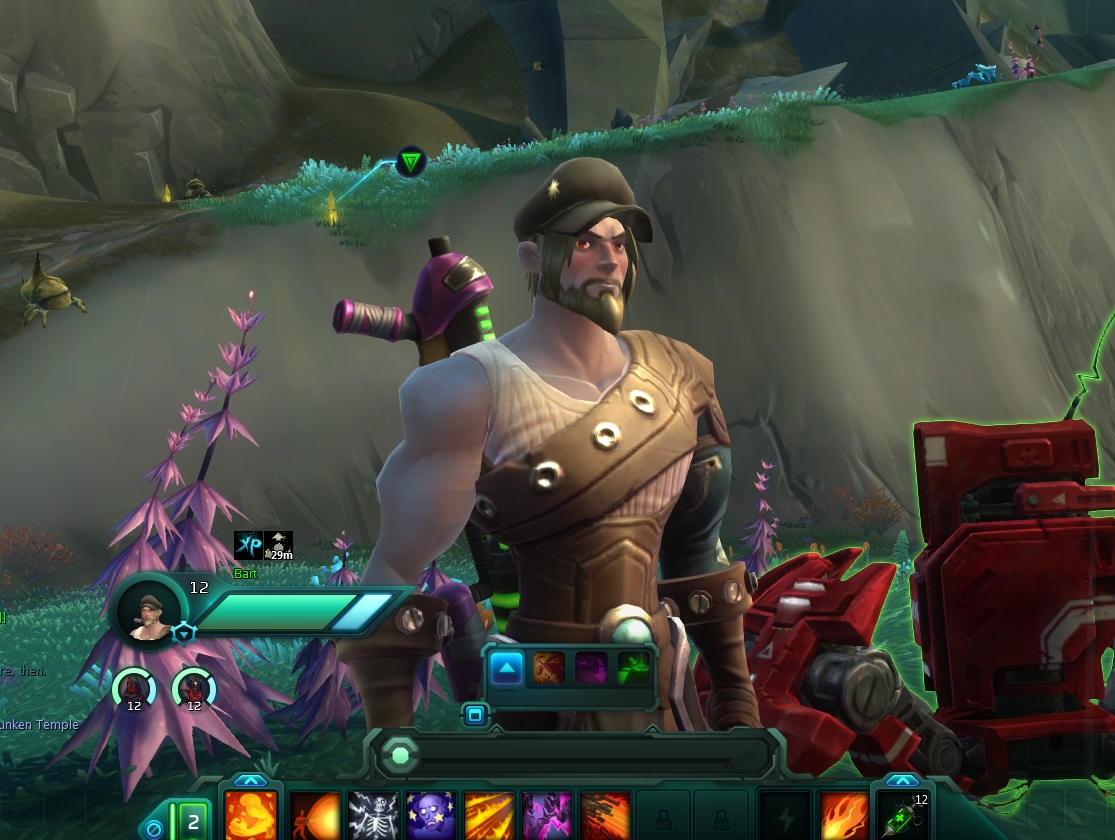 Last Sunday I was at level 10 in Wildstar and determined to play it exclusively until I got to level 15, at which point I’d make a decision about whether or not I was going to add it to my roster of games. Level 15!? Bah! I’m a lightweight! Both Scopique & Scarybooster are committing to a year of only playing Wildstar. Apparently the game is scratching a major itch for both of these gentleman.

I’m still aiming at 15. Last night just before signing off I hit 14 (I don’t get a lot of time for gaming during the week). I have to say I’m enjoying it more than I was but I’m still on the fence. I have managed to ‘let go’ when it comes to the lore and I’ve stopped reading all the books and files because frankly most of them aren’t worth the time it takes. For every file that gives you info about the world there are 4 that are just intended to be funny or something.

A lot of the quests still feel pretty mundane but I have now gotten the chance to do some that have a bit of a twist. It’s a sad reflection on the state of MMO gaming when adding timed button presses or a mini game of “Simon” to a quest solution feels like a refreshing twist, but well…that’s the genre. MMO players, myself included, are so desperate for variety that adding a super-simple mini-game gets us excited.

Combat has become more challenging, at least at times, which has added to my interest in the game as well. Up to level 10 you can pretty much sleep walk through combat without any fear of death, at least if you’re an engineer. I can’t speak to other classes; remember the Engie has 2 robot pets to help him out.

Following the Settler path continues to be good fun and I still feel good when I can spawn a Taxi Stand (or some other boon) for other players.

Speaking of other players, I had one bad experience with the community on Dominion-Evindra so far, but plenty of good ones. I turned off the Advice channel but have left on Zone. There’re too many bugged quests in the zone I’m in and it’s nice to see players helping players when it comes to identifying gameplay problems. I’ve joined a few PUGs and they’ve been civil as well. In fact my PUG experience has been good enough that I’ve been offering to help people complete quests that I’ve already completed, just to try to be an asset to the community and make some new friends.

I joined the Alliance of Awesome guild but so far it’s been pretty quiet. I have the feeling I might play later than everyone else, or maybe it’s just that everyone is on voice chat. I’m not sure it’s going to be the right fit for me but I’m giving it time.

At level 12 or so I unlocked crafting but I haven’t done too much with it, though I have been gathering things. For both Farming and Relic Hunting you ‘gather’ by shooting something in the world. Since my guns have a fire zone that is wide and long, invariably I aggro mobs while I’m trying to gather, which leads to some chaotically fun moments of trying to dodge some beastie while I shoot the crystals off a relic. And sometimes the relic gets up and starts running around for a few moments before vanishing. I suspect I’ll get some goody if I can ever kill it before it poofs but so far no luck.

So as I say, still on the fence but enjoying the game more than I was at 10. I do feel like I suffer from “quest fatigue” pretty often. Any given area just seems to have endless quests that keep you in one spot killing variants of the same mobs for far too long. But I’m also out-leveling quests so maybe I’m not supposed to take them all.

Tonight I’ll see about doing the quest that gives you a house. Everyone seems to LOVE the housing in Wildstar and it might be the hook that keeps me around. I enjoy the housing in EQ2 but honestly aside from crafting there’s not a lot to DO in an EQ2 house, but in Wildstar it sounds like houses can be outfitted with a variety of activities. I also have a secret hope that Angela sees the housing and wants to play; having her interested in the game would go a long way towards keeping me interested as well.

I guess I’ll probably hit 15 this weekend some time and then I’ll have to decide if I want to press on or if I’d rather focus more on ESO, ArcheAge, Landmark, or single player games. My plate is pretty full and if a game isn’t really doing it for me there’s no sense in trying to force it. I know at the least I’ll celebrate 15 by taking a break and getting back into Watch Dogs! But last night I was playing Wildstar and glanced at the clock and it was after midnight and I realized I’d completely lost track of time. That’s generally a good sign for me. So maybe Wildstar is working its way into my heart.