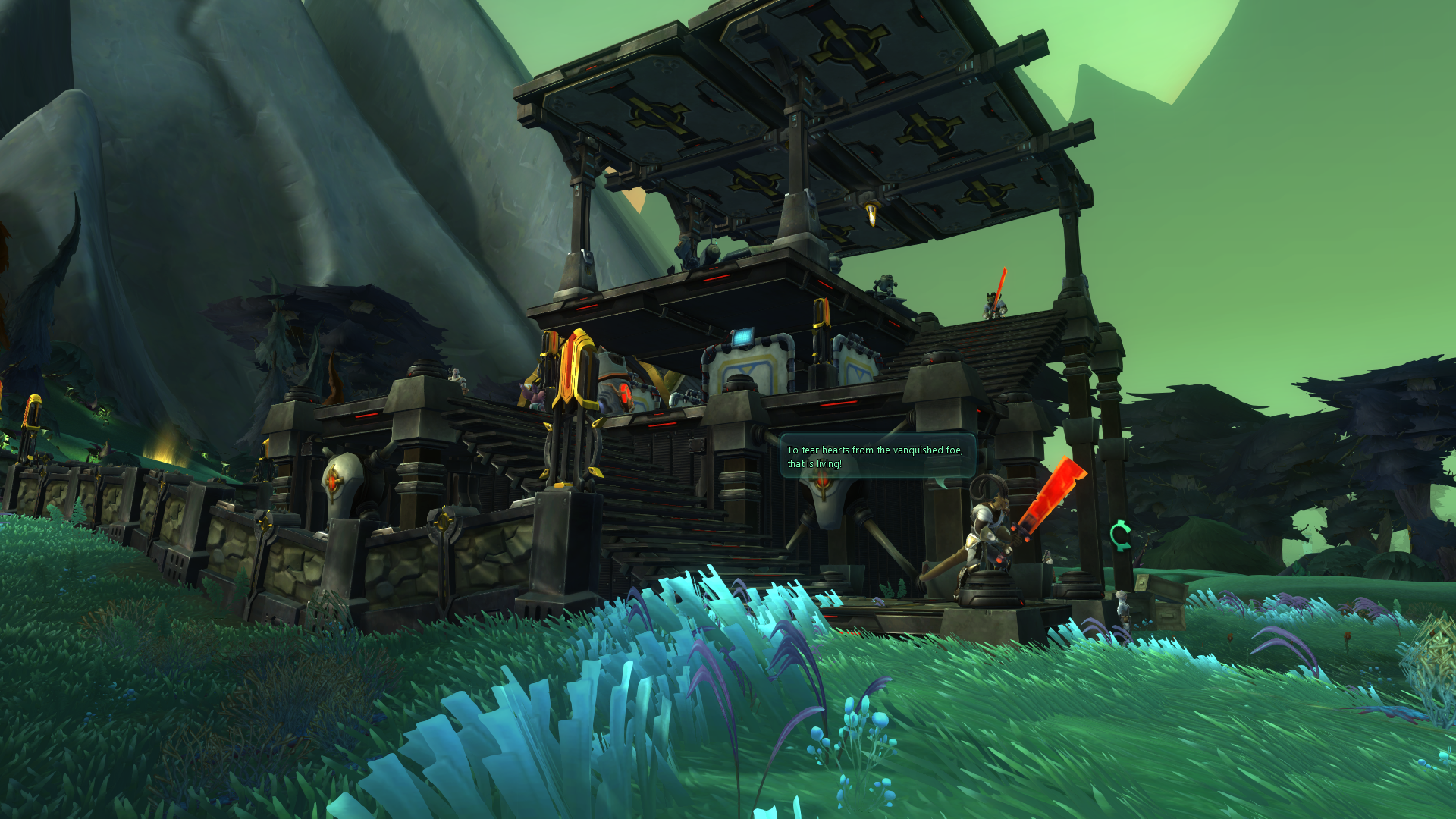 So I made a promise to myself to play Wildstar exclusively until I hit level 15 just to give it a chance, and this morning I made it. So now what? Will I keep playing or am I done?

I’d hoped to be able to decide but honestly I’m still on the fence. I guess the truth is I’m leaning more and more towards sticking around but I haven’t fallen off onto the “Wildstar is awesome” side just yet. If I had nothing else going on then I’d definitely be subscribing but I have to decide if I like it more than Landmark, ESO and ArcheAge, basically. Clearly trying to play 4 MMOs is ridiculous.

This weekend I’ve spent messing around with my house a little. Housing doesn’t grab me as much as I hoped, but I have a relic mine and a farm on my housing plot and they’re both handy. I also added a crafting station so I have all the ingredients I need to make medi-packs and stuff without leaving home. I think I’ll buy a house, though. The freebie pre-order house is, IMO, stupid looking. (It’s a fat round spaceship that looks like it came from a kid’s cartoon.)

Meanwhile out in the world I helped take down what I guess was a zone boss. All I know is someone said in zone chat “Everyone come to StemDragon!” and then a chorus of “WTH is StemDragon?” Turns out it’s a big dragon-beast with somewhere over a million HP. I ran there to help and it was pretty fun, though really just a matter of spamming attacks along with 15-20 other players. For my trouble I got an Achievement which is nice I guess.

A lot of the content I’m moving through now is pretty group-desired. You can solo your way through but you have to have a care not to aggro too many mobs, or even a single mob that is heroic. The good news is you can just organically join other players when doing this content. It makes things both easier/faster and more fun and so far the community seems prone to helping each other which is kind of awesome. So over and over I find myself traveling with another player or two and while we don’t talk or Group we help each other along.

One of the types of Settler missions is gathering materials for an NPC builder to build some structure. I’ve been doing these and moving on, pretty much ignoring the ‘construction site’ since to finish the quest you only have to contribute a fraction of the materials needed for the site to be completed. This morning I decided to stick around and after I finished the quest I kept gathering materials until the project was done. Along the way I was also harvesting relics and crops plus killing lots of mobs so I got the benefit of that too.

In this case the completed project was a de-probing center (shown in the image at the top of this post). In this area of the world an alien race has been abducting people and using probes on them. Then they’re returned with the probes still inserted. (This gives you a good feel for the style of humor in Wildstar.) Once the de-probing center is built you can take a quest to remove the probes from some patients. It was a really quick quest…took under a minute. The de-probing center also has a vendor. I’m not sure if another class could enhance it or not. I’ve done some things as a settler that are “Step 1” of a project and require a Scientist or a Soldier to do Step 2, but I’ve never had anyone on-hand to do step 2 so I’m not really sure how all that works.

I’ve been pretty grumpy about the Lore in Wildstar but I have to say that now some of the story questlines are getting more interesting. I still don’t bother reading the books and files you find but if instead of working ‘horizontally’ and doing every level 10 task and quest before moving on to level 11 tasks and quests, you grab a story quest and just follow the series and ignore distractions, they can be a lot more interesting. One I enjoyed started with having to sober up some dude in a bar and took me all over the place and finally into a kind of secret base. Fun stuff!

So that’s all the good stuff. I don’t have a lot of bad stuff honestly. There’re still bugged quests and the game UI goes wonky often, though generally a quick /reloadui fixes things. I get terrible lag spikes now and then and random disconnects but frankly these are the kinds of things I expect from a newly launched game.

I think at this point the one thing missing is a large group of people to play with. I’m in a guild but seem to keep different hours from most of the members. Last night when I was playing there were only 5 people online; this morning I was the only only one! This is during the free month and I’m really concerned about what will happen when subs kick in. It’s hard not to compare this to ESO when during the first few weeks there’d usually be 20+ people from the guild online. As far as I could tell, each of the 5 was doing his or her own thing and no one was talking in chat except for me and Chris. So if I’m going to keep playing I’ll probably quit this guild and go in search of something bigger.

I don’t think Wildstar is a good solo game; it’s just not how it was designed. I mean you CAN solo but everything is more fun with more people in this one. I’m really happy playing ESO solo; I’m really invested in the story and the lives of the NPCs and all of that. Wildstar though is all about ACTION and jumping around like crazy during combat and generally the more the merrier. If I’m alone in an area for too long just fighting by myself I tend to get bored and log out. Happily just the addition of random players helps to stave that off.