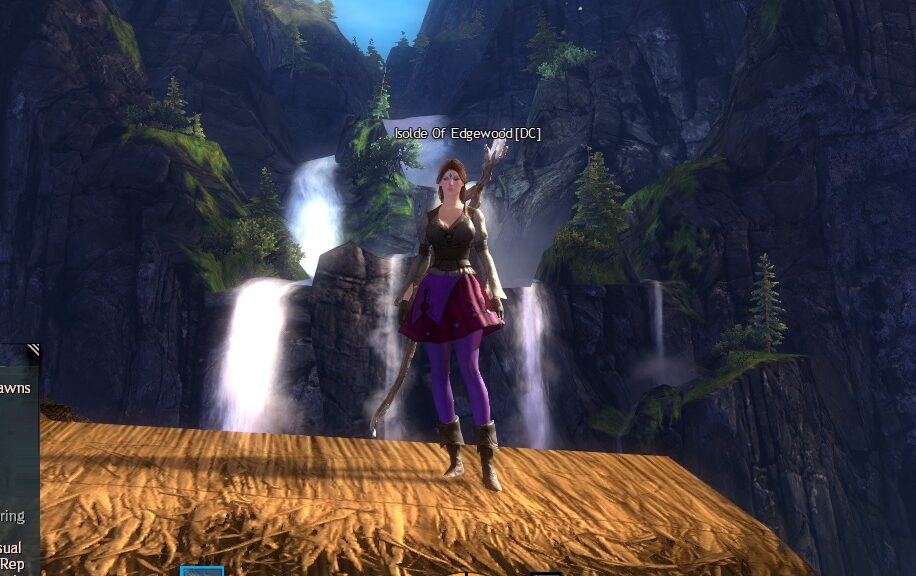 A while back I decided to give Guild Wars 2 another try. I logged in, grabbed a low level character (I had 8 characters, most of them under level 20) and started to play. He was a hunter who already had a pet. I was in a map I had no recollection of and with no other indicators of what to do I was trying to fill a “Heart” which I was finding really frustrating. The NPC wanted me to eliminate Centaurs but I couldn’t find any to eliminate. Combat felt super easy and dull (in retrospect this was because I was encountering single enemies that I was scaled down to). I only lasted a session or two before I quit.

More recently Belghast’s enthusiasm got to me and I decided to try yet again. This time I sacrificed a character to free up a slot so I could start completely fresh. I picked a Revenant (?) because it was a class I’d never played. Turned out to be a nice mix of melee and ranged. One of my ancient GW2 memories was that playing pure melee isn’t much fun because you often can’t even see your character in a group fight. I dunno if that is still true, or if it was ever true, but it was a memory I had.

Anyway, I found my new character pretty fun to play. I was just following the games advice to move through the zone of Queensdale. You get prompts like “There is an unexplored region in this direction” or “An unclaimed Hero Point is over here.” So I just went with the flow. In terms of levels I’d just caught up with that earlier character when I arrived at that same Heart and ran into the same issue. There is one Heart in Queensdale (Beetletun) where it is really not apparent (to me anyway) where to go to complete it. It seems a peaceful place. But when character #2 hit this spot I was already on-board the GW2 train so I was more willing to search around. I finally found one centaur camp and just farmed it until the Heart filled up, then I moved on.

Fast forward a bit. New character has 100% completion of Queensdale but wasn’t level 20 so not able to do the next phase of her story. I decided to look into crafting for her, rather than pushing into the next zone. I’d done crafting in the past and after a while memories started to resurface of leveling it up via discovering recipes. That was going well until I ran out of Aspen Wood, which is a tier 1 material.

I googled where to farm it and found a map that led me a merry chase throughout Queensvale. That actually felt pretty tedious though, so I found one spot where a good number of trees spawn (Altar Brook Vale) and then I tried something. I gathered several of my low level characters in that spot. I’d log one in, gather the trees, log that character out and another in, gather more trees, and so on. It seems to work…though for all I know just waypointing away and back might do the same thing on a single character.

But the nice knock-on effect is I’ve been playing my Revenant, an Elementalist and that Ranger that I more or less rage-quit while playing, and they’re all pretty fun. Altar Brook Vale is a lively place with a bandit camp that from time to time disgorges an army of bandits (bound for an event nearby) and more than once I’ve been caught up in a running battle against a hoard of bandits with some other players. There’s a hero point here too and while I’m waiting for trees to respawn I’ll often help other characters clear it. I’ve even stumbled into some of the fights that are… I dunno what they are? They show up on the map as red icons. Remnants or something? Suffice to say MUCH too powerful for me but I can hang at the peripherals and contribute enough to get some rewards.

What’s weird though is that I just keep playing different characters in this one tiny spot on the map, doing different things (chased a loot goblin, fought a cave troll, slaughtered some harpies, gathered grub bits for a fisherman, found a TON of bandits…etc etc) without getting the least bit bored.

So yeah, I guess I’m getting it. The design of the game draws high level characters back to these newbie areas too, which means I’m seeing cool mounts and stuff which is fairly aspirational for me. And I’m enjoying the leveling process that ArenaNet seems desperate for you to skip — I have 3 level-80 boosts, wads of boosts for levels 20, 30, 40, 50 & 60, and some items that give you a level on use. Not using ANY of that. Might as well hire someone to play the game for me. Leveling is fun!

Thinking way back, when I used to play GW2 I just remember doing most of my ‘leveling’ via daily rewards and really not knowing how to play my character, which of course doesn’t add to the enjoyment of a game. One of these days I’ll get brave and wake up a level 80 and see if I can figure it out, but for now this little stable of sub-20s is providing much enjoyment.