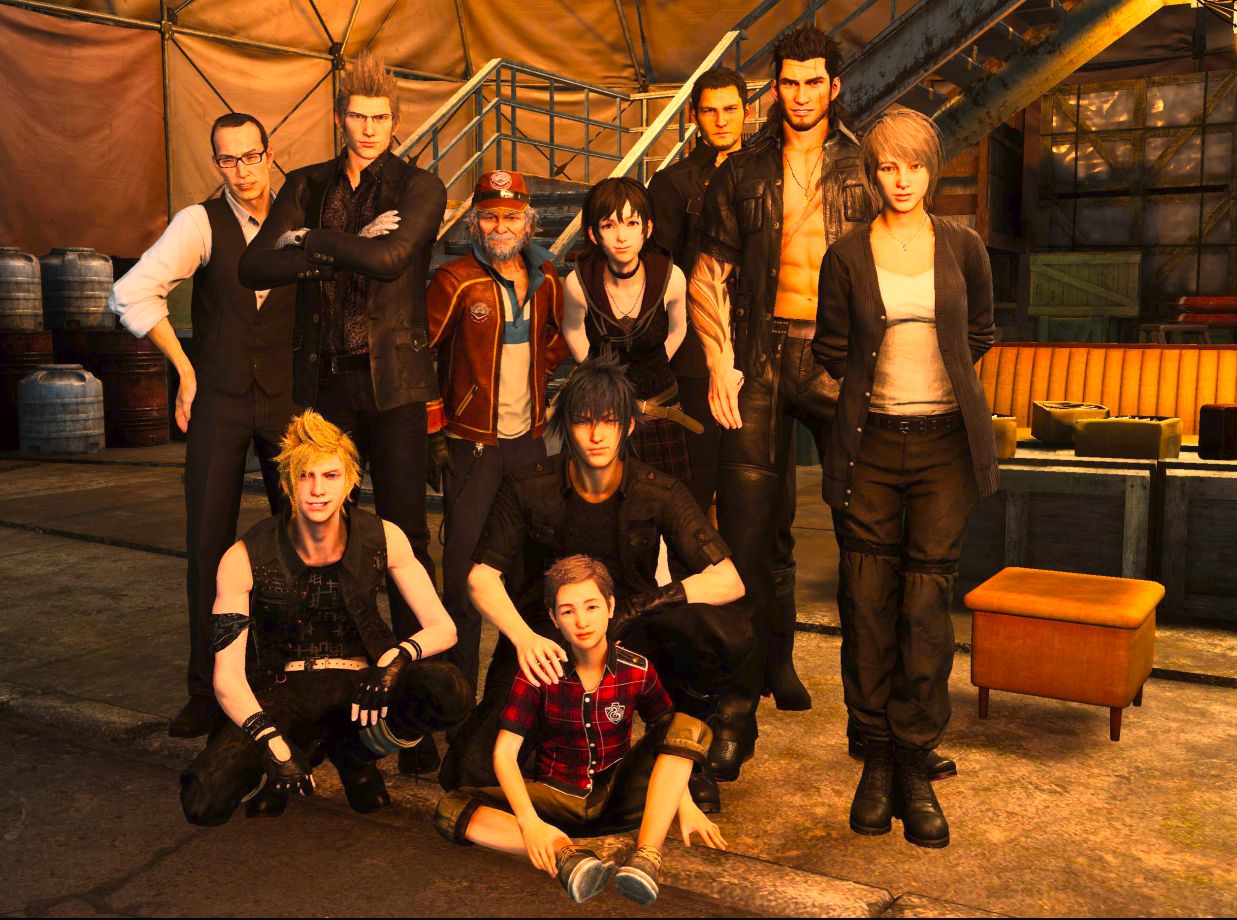 What a strange game this was. I’m pretty glad I finished it. The story, fragmented though it was, made it worth the time, though I still don’t know that I’d blanket recommend it to others.

In a lot of ways it feels like the devs were making an open world Final Fantasy and then deadlines started looming and they changed their minds. I spent something like 30 hours playing through the first 8 or so chapters in an open world, doing a ton of side quests and exploring. I remember an Achievement popping for having completed 80 side quests, so I did more than 80. As you play through this part of the game you level up your characters and gear, of course, but you also do things like improve your car and customize Chocobos. Chocobo riding levels up. Fishing levels up. Cooking levels up. There’s even a point where you can start growing things…

And then suddenly the game becomes a more-or-less on-rails experience and you leave cars and Chocobos behind. I spent 30 hours on the first 8 or so chapters and about 8 hours on the final 6 chapters. Also by the time I left the ‘open world’ portion of the game I was leveled near to 50 and doing level 30 content, but by the end of the game I’d only accumulated a couple more levels and the content had caught up to me. I’m glad I did all those side quests or the end of the game would’ve been brutal.

The combat system is so close to being fun, but too often things get too hectic, or a bush or wall comes between your character and the camera and you can’t see what is happening. Towards the end of the game there are some boss fights that change the fighting system and honestly even though I beat them, I still don’t really understand what I was supposed to do. Button-mashing got me through. When the main combat system worked, it was really entertaining.

While I never really grew attached to any of the 4 main characters as individuals, during the open world portion of the game I did start to enjoy them as a group. There they are in life-or-death battle and they’re still trading quips, but they’re looking out for each other as well. One of them will draw Noct’s (and the player’s) attention if someone is really hurt, for instance. Between battles they bitch about it being too hot or too cold, or talk about how they can’t wait to get some food. Just kind of normal stuff. It did feel like a group of friends and I was an honorary member of the group.

That all unraveled in the linear part of the game when Ignis, who is kind of the den mother of the group (as well as being the cook) is blinded during an off-screen battle. In that same battle Noct’s intended bride and childhood friend is murdered. Yeah, shit got real, real fast. Noct is consumed by his grief while Ignis is trying to come to terms with his loss of sight. Gladiolus, the tank of the group, takes exception to the fact that Noct is dwelling on someone who is dead and not doing more to help their hurt brother. The two start to fight, a lot. Prompto, who is kind of the ‘everyman’ of the group, tries to hold the team together as best he can.

During the next expedition Ignis wants to come; he asks that the group not leave him behind. I said OK (there was an option to leave him behind and I’m not sure what would’ve happened if I’d chosen it. I’m guessing the others would’ve insisted he come.) Ignis is now walking with a cane, but he is new to feeling his way and moves slowly. If Noct (and you, the player) move too quickly the others yell at you about leaving people behind. In the meanwhile poor Ignis is stumbling and falling frequently. Prompto tends to hang back to help him while Gladio harangues Noct about his behavior.

From a story point of view I found this super interesting. Usually in a setting like this (an ‘adventure’ story) if one of the band gets hurt they’re immediately ditched to either die a noble death or to be retrieved later as an afterthought. That the gang brings Ignis with them is both heart-warming and heart-breaking. Just to drive the latter home, the next time you camp you don’t get Ignis offering you a menu of delights for dinner, instead you have 1 choice: a cold can of beans. It’s just kind of gut-wrenching.

From a GAME point of view, though, this was really annoying. Not being able to run as you’re exploring areas was super frustrating, made more so by Gladio at times yelling that we need to hurry (which is kind of his default thing he says through the whole game) and then yelling that I was going too fast. And the meal thing: I’d spent those 30 hours finding every recipe I could, and gathering food from all over the place, so we’d have a wide selection of food (each meal has a different set of buffs that last through most of a day). Having that all taken away really sucked.

Anyway, I guess that’s enough about a five year old game. Overall I enjoyed it, but not to the point where I want to stick around post-story to chase Achievements or clean-up side quests. I was level 52 as the closing credits ran and I have side quests of level 99! The level cap is apparently 120, so I guess they expect people to just keep on exploring for a LONG time post story. Yeah, I didn’t like it that much. If I squint I can see a truly great game in the design doc, but what got delivered was like a 3 out of 5 title.