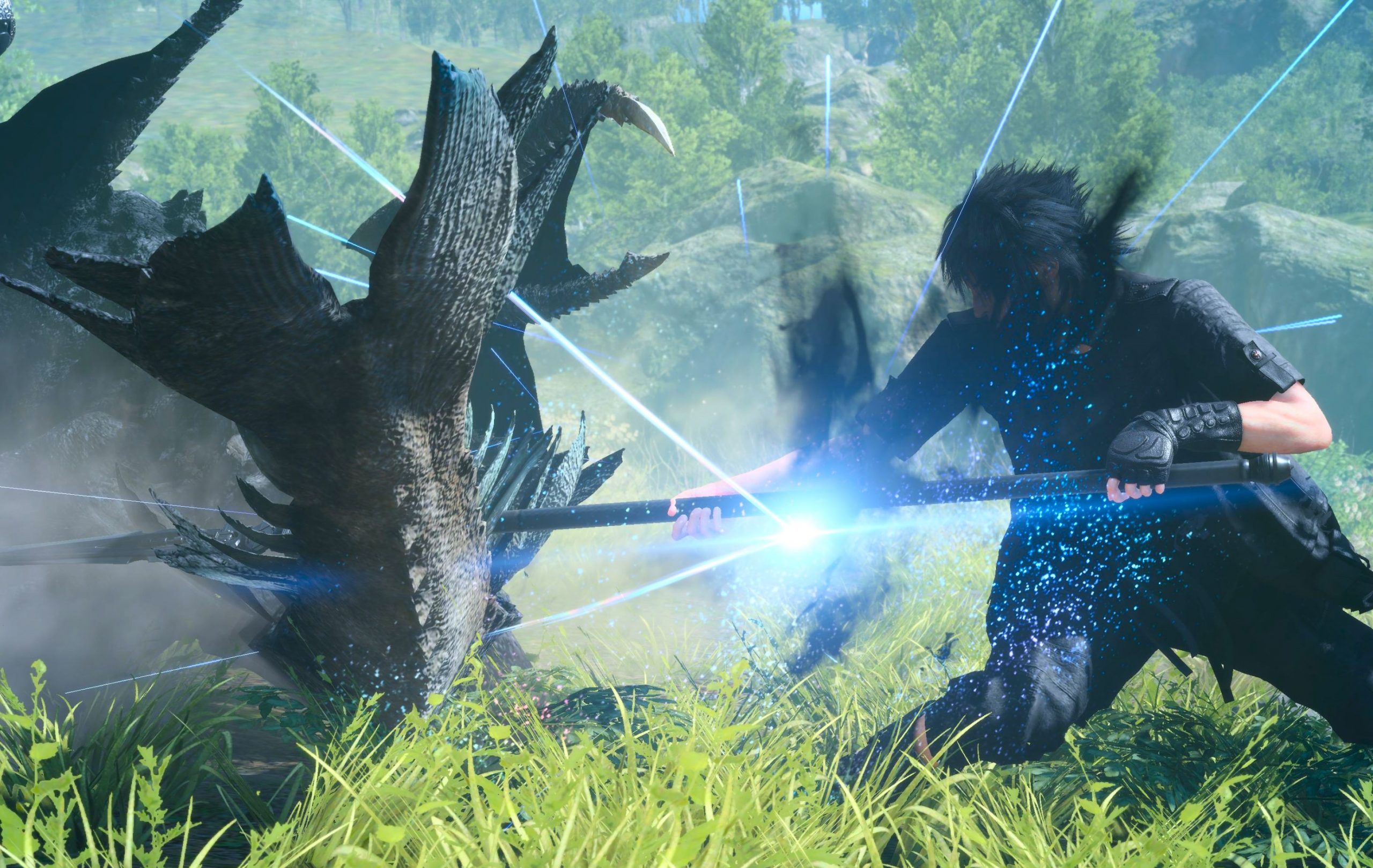 My Xbox Series X has a lot of storage devices. There’s the 1 TB internal storage built in, and I invested in the Seagate 1 TB pseudo-internal storage module. So I have 2 TB just for Series X games, minus whatever the operating system chews up. For last gen games I have a 1 TB external SSD, and an 8 TB external traditional HDD drive. It’s a stupidly large amount of storage, and the 8 TB drive is pretty noisy and seems to spin up randomly even if I’m watching TV or something. I’m looking to remove it, but in order to do that I need to jettison some games.

All of which is how I came to be playing Final Fantasy XV. I sorted my last-gen games by size and FFXV was one of the biggest at about 100 GB with all the expansions installed. I have no recollection of buying the version of FFXV with all the DLC. Maybe it was a freebie at some point or it was on a super sale and to cheap to pass up? Who knows?

I did recall that I had started the game a couple times in the past but never made it very far. When I fired it up on the Xbox I had some save files with about 7 hours of playtime, last saved in 2017. I opted to start over, honestly assuming I’d bounce off it AGAIN and feel OK about just deleting it from the drive.

Two weeks later I’m still playing and I’ve got around 30 hours into it. I’m not sure why; I wouldn’t call it a great game. It is almost great, but has just enough annoying systems in it to keep it from getting there. Still, I’ve become invested in seeing it through.

I did almost bounce though, after about 3 hours. Then my buddy Irata reminded me that there’s both a movie (Kingsglaive: Final Fantasy XV – available on Netflix) and a short anime series (Brotherhood Final Fantasy XV – available on YouTube), both of which help set the mood for the show, and make the characters (for me anyway) a little less annoying.

In FFXV you play as Prince Noctis and you travel the world with your 3 male pals. All of you dress in black with lots of buckles and such; you kind of look like some sort of emo boy band. I found the characters pretty unappealing until after I watched the shows above, and particularly Brotherhood. When you know their backstory you start to understand them a bit more.

You can eventually change the gang’s attire but that changes their stats too and at 30 hours in I don’t have anything with better stats than what they were ‘born’ in. So I put up with the all-black look.

Anyway, getting ahead of myself.

At the start of the game your party of four are on a road trip. Prince Noctis is off to meet up with his bride-to-be, the oracle Lunafreya. They don’t get very far before all hell breaks loose and suddenly they’re refugees.

From that point on you travel the countryside in your car, the Regalia, fighting anything that moves, doing fetch quests, earning money for food, camping and slowly pushing the story forward.

Combat is almost really fun. In fact it IS fun in the rare moments when you’re fighting alone or with 1 other party member because you can follow the action. Most of the time you’re controlling one of four black-clad individuals fighting enemies that generally come in groups. Trying to pick Noctis out from his three companions and 10 enemy soldiers is a real challenge for me. I often have to run from the battle, then come back at it once I have the space to see what is happening.

Fortunately Noctis has a warp attack that lets him return to the battle quickly and with a big hit on an enemy. When you feel in control, the combat is awesome. It’s just that all too often you’re just trying to parse out everything that is happening in a fight. I mean I guess in a way that’s realistic, right? Battle is chaos. But in a game, to me it’s kind of frustrating.

There’s a “Wait Mode” for combat but I don’t like it much either. Using this mode nothing moves until you move, as best I can figure. If I could quickly toggle “Wait Mode” on & off it would help a lot but to change it I have to pause, access the options menu, find the battle style toggle and turn Wait on or off. It’s too cumbersome to do it very often.

The other big frustration is traveling around, particularly early in the game. The team generally travels via their car, and until Chapter 3 you can’t actually drive it; one of the other team members does. Getting from Point A to Point B can take anywhere from 1 to 8 or 9 minutes, real time, during which you, the player, has nothing to do other than go get a sandwich or something. I think the developers imagined us putting ourselves in the car with our ‘brothers’ and bopping along to the radio while watching the world go by, but that certainly didn’t work for me.

Eventually you start unlocking fast travel points and you get the ability to drive the car yourself, and in the edition of the game I’m playing you can convert the car to an off-road model and start cutting across the wastelands. Travel becomes much less of an issue at that point. Things get even better when you get to start riding Chocobos, complete with their jaunty theme song. That’s always fun (of course… I mean who doesn’t love Chocobos!?).

There’s a day/night cycle and (at least in the early chapters) you do most of your adventuring during the day. At night the bigger, badder enemies come out and your team members will resist you if you try to head out into the dark. For instance Ignis, who drives most of the time, will refuse to do so at night until you reach a certain point in the game.

The idea is that when darkness falls you need to find a place to spend the night. This can be a motel, a caravan (a trailer) or a camp site. Couple twists here. First as you fight enemies and do quests you gain experience, but it is held in a kind of reserve until you spend the night somewhere. While you sleep you level up. Staying at an expensive hotel can mean getting bonus experience. Staying at camp means no extra experience, but camping offers the opportunity to cook a meal for free. Meals give your team buffs that last a good long time. So there’s a balance there: do you want to spend $$ to get extra exp, or do you want to save $$ but get some nice buffs?

There’s also the convenience factor, of course. If you’re adventuring and it gets dark, it’s a lot more convenient to find a campsite nearby rather than spending the time to head back to town to a hotel.

Anyway I could go on and on; it’s a big game with a lot of systems. But it’s also an old game, and not an old game I’d give a blanket recommendation to. But y’know, the blog needs fodder so I figured I ought to at least report in about what I’ve been doing with my free time. Maybe I’ll come back and talk about the GOOD parts of the game at some point!! 🙂