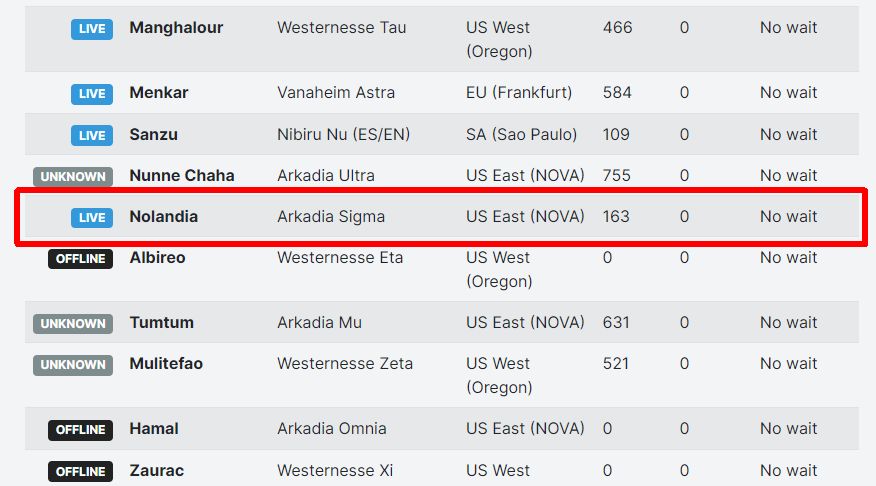 Last night, it being the start of a weekend, I did something drastic. I deleted my New World character that was on Minda where my friends were all trying to play. I just didn’t want to spend my weekend trying to manage a queue around chores and dog walking and such. Since Amazon has promised free server transfers, I’m gambling that I can play on another server for now, then transfer to Minda later.

[Since New World only allows one character per server I had to delete my existing character to free up room for my eventual transfer, plus I wanted the same name.]

In the course of one evening I almost caught up to the progress I’d made in the 3 prior evenings of combatting the queue in order to squeeze in an hour of playing before bedtime. So that’s the good news.

When looking for a new server to roll on, I sorted by queue size to find one with no queue, then I chose a server with Low population. Randomly picked Nolandia (NA East) and off I went. Overall the new server is pretty chill. I even have all the chats on because it is all relatively civil (there’s always the odd troll). Gameplay also felt more responsive but I’d had to reboot my machine earlier in the day so maybe that was just local. But suddenly I had no issues dodging out of the path of attacks and such; prior to last night it felt like my dodges didn’t register quickly enough to be super effective unless a mob had a slow tell, like gearing up for a charge attack (boars).

But there is always a downside. On this world NO territory has been taken by any of the factions. At first I didn’t care because that just felt like balance to me. But then I realized that, at least as far as I know, there’s no way to level up crafting stations unless a faction controls a town. So the entire world is stuck at level 2 crafting stations; we’re stuck in the iron age, literally.

Nolandia was add on Sept 29th and Amazon added even more servers to NA East on Friday which is puzzling. Why keep adding new servers if some of the servers you have are empty? Maybe they’re gearing up for server transfers. Or maybe it’s a publicity stunt to show they’re reacting while they figure out a real solution.

Anyway I’m interested to see what happens on Nolandia. [I am a boob, I was looking at “# of Claims” not number of members.] There was some discussion in Faction chat of dissolving some of the companies and everyone joining into one large company so they can take a town. I don’t really understand how taking a town works, beyond being able to out and out buy one for I think 100,000 gold. I wonder if an alliance of several small companies could do it.

I’m not too concerned since I’m not thinking of this as my permanent home, but if you ARE looking for a server to call home for the long run, maybe look for one with Medium population. Too high and you’ll spend your gaming time waiting in a queue. Too low and there’s not enough warm bodies to support all the game’s systems, apparently.

[The image at the top of the post comes from New World Status. I don’t honestly know how accurate the site is (it isn’t affiliated with Amazon), but it is reporting that there are a total of 163 players on Nolandia! (Granted, it is early on a Saturday morning.)]