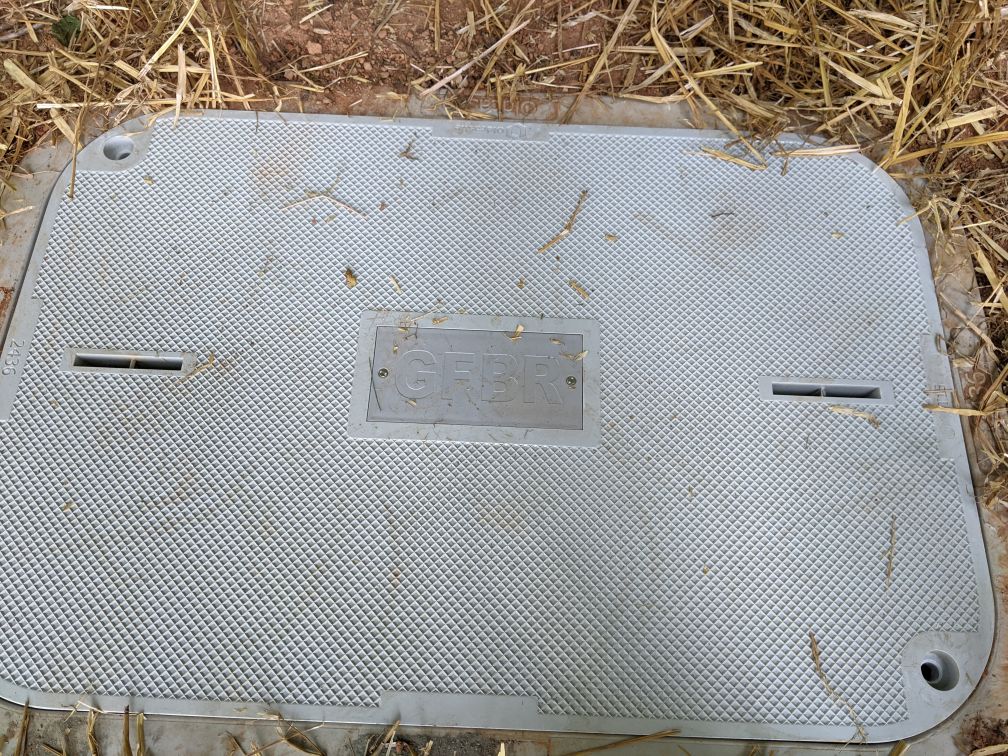 When we moved into our current apartment about 9 years go Google Fiber was “coming soon.” We signed up to get notified and got a free t-shirt. While we waited we signed up for Time Warner Cable, which was the only viable option.

First there was a lot of prep. We live in an apartment complex so they had to run the underground conduits and fiber (the image at the top of the posts is one of the sunken Google Fiber boxes; it’s maybe 2’x3′ and there seems to be one for ever 2-3 buildings), then they placed small-ish boxes on each building and ran a thin cable to the front door of each apartment. Two long cables, one per floor. Above each front door they place a narrow box. They did this for all apartments before they ‘turned on’ fiber. It took a couple of months to do all this, then a month or two before the service was ‘lit up.’

Once we signed up, they came and drilled a hole through the wall, again over the door. They threaded a cable through and installed a box above the door on the inside. From there they ran a very thin gauge cable across the ceiling to where they’d install the box that the router connects to. This cable was small enough that they just used some kind of caulking to ‘glue’ it down. Once they got to where they wanted this box, they punched a hole in the wall, cut out some drywall near the floor, and dropped the cable down. Fished it out and installed the box down near the floor.

This box in turn connects to a Google Wifi router. You can also use your own router for their 1GB service. The 2GB service requires that you use their hardware (there are I guess work-arounds but officially only their hardware is supported). At this point fiber becomes no different than broadband from your cable provider. I decided to use the Google router since my own router is getting a little old at this point. I just plugged into my existing spiderweb of Ethernet cables I have snaking around the apartment and I was done.

And really that’s the story. It was pretty simple. The last time I had fiber it was Verizon Fios when that system was quite new and THAT installation was major compared to how things are now (I’m sure Fios installs are much simpler now, too. It’s been 15+ years or so since I first got Fios).

Time will tell how reliable it is. You can do a speed test on the router itself and it is reporting high 900s for both up and download. At my PC I’m getting less, but still way faster than I was getting with Spectrum (formerly Time Warner Cable):

I’m guessing I’m losing some speed from having crappy old Ethernet cables or due to the crowded hub. I’ll debug it eventually but for now I’m happy with what I have. I opted for the 1 GB service which lists for $70. Their 2 GB service is $100 but with just the two of us living here I doubt we can saturate that 1 GB plan.

For comparison, we’re paying $90 for the Spectrum service, but that is after taxes and fees and what not. We’ll see how much Google Fiber actually is once I get our first bill.

So why’d we switch? Money and speed. When we first moved in (before Time Warner Cable became Spectrum) it was crap, but honestly for the past few years Spectrum has been pretty reliable for us, and when there IS an outage they do a good job of sending out text messages with estimated repair time.

That said, this is the cable junction box on our building:

Doesn’t exactly inspire confidence, does it? Also the installer who had been working when I took that picture had left it like that; he hadn’t even replaced the cover. I had to do that. I’ve tried to get this situation addressed but Spectrum says it is the responsibility of the apartment complex, and the complex says it is Spectrum’s responsibility. Any time an installer is out there working in that box I start streaming YouTube so I know as soon as I get knocked offline. Often while connecting apt A, they disconnect Apt B by mistake!

The Google Fiber installer, by the way, was friendly, courteous and the last thing he did was ask to borrow a broom so he could sweep up the dust from the drywall where he had drilled/cut. The site was immaculate when he left.

The one concern I have with Google Fiber is the physical security of the fiber. Like I said there’s 1 line that runs the length of the building for each floor with a drop point over each door. And it’s a very thin line. I think could could probably snip it with a pair of scissors and knock the entire building off line with 2 quick snips, one per floor. I can totally see some kids in the complex doing this as a prank. @partpurple says I’m being paranoid, which may be true. But I always expect the worst of people.