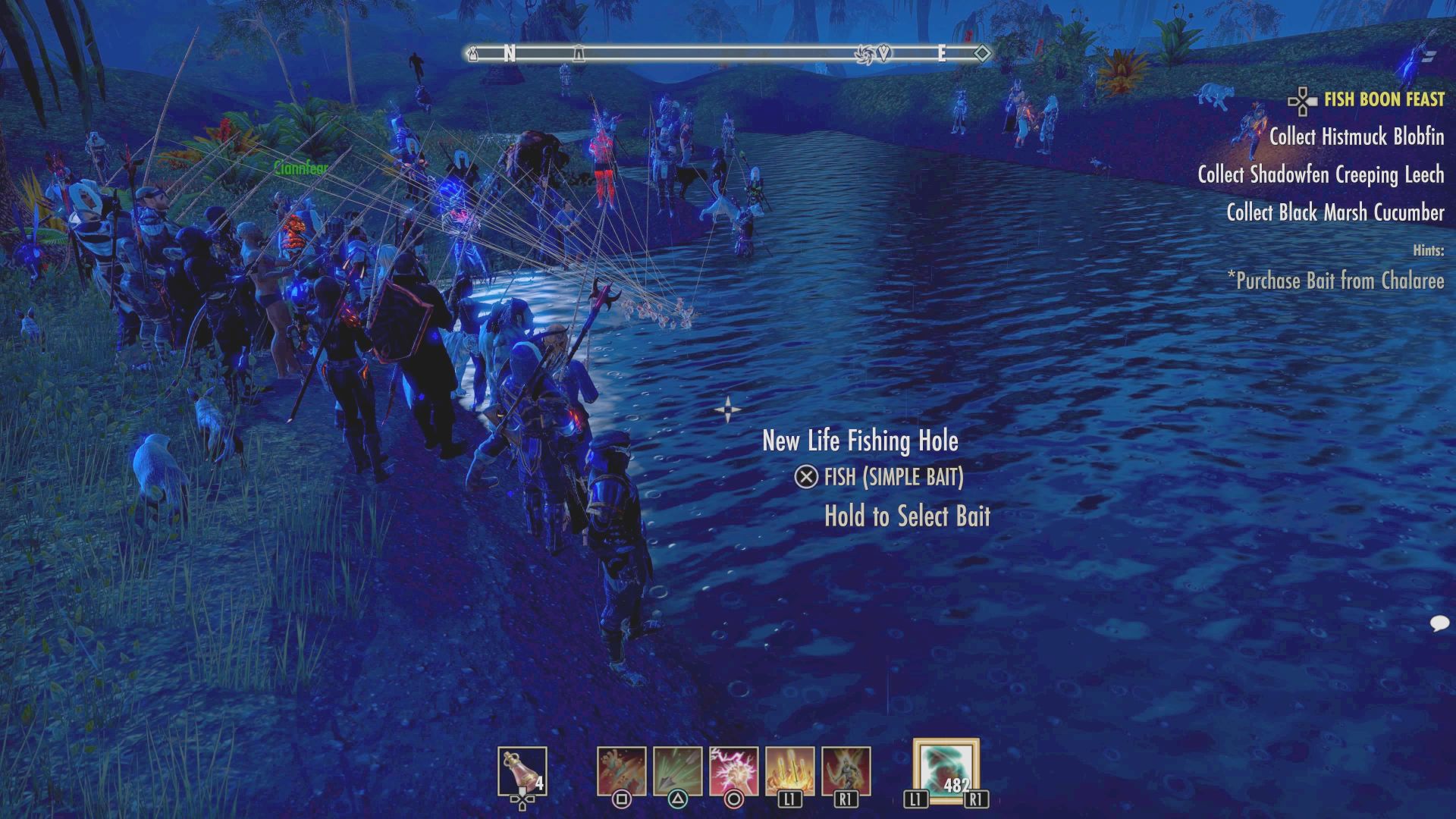 I skipped No Man’s Thursday last night in favor of checking out some of the limited time events I mentioned yesterday. I tried my hand at Call of Duty: Infinite Warfare’s multiplayer mode and that went about as well as expected (in other words, it was a disaster). Why can’t game companies do matchmaking right? The match I was in, and I believe it is 5 on 5, my side had two level 1 players (me and another guy) and we were short a man. The other team had 5 guys level 40+ (our other two guys were also 40+). Needless to say we lost, badly. Though honestly I got more kills than I expected to.

Anyway, then I logged into The Elder Scrolls Online to check out the New Life Festival. I’m not sure what to think of it so far. Maybe what I think is that rushing to do these the first day isn’t the best idea. For me, I’ve only explored one of the 3 factions in TESO, and the quest began with an NPC (Brega) deep in the Ebonheart Pact area. So step 1 was riding through three zones trying to find a path the the NPC (there’s probably some way to teleport there but I couldn’t find it). Once you find the main quest giver she sends you off on a series of sub-quests to see how the different people of Tamriel celebrate New Life Festival (which is essentially New Year’s Eve, so no decorated trees or anything).

First quest sent me back to the Daggerfall Covenant lands so I took a wayshrine to where I needed to go and did that. (I had to perform for various crowds… simply push a button in the right place.) Then back to Brega for a box ‘o loot and my next quest. Number 2 took place right near her so that was simple. The next took place along the trail of wayshrines I’d tagged on the way to starting a quest. After that I had to go to Grahtwood. I had no idea where that was but after a bit of scouring the map I saw I could take a boat from Wayrest to Grahtwood, so I did that. The Grahtwood quest actually involved a tad of combat (the earlier ones are basically go somewhere and click a button to perform some task) and the poor mobs barely spawned before they were slaughtered.

After talking to Brega again I was sent to Shadowfen, another place I’d never been. I couldn’t find a shortcut to get there so more riding across zones. For this quest I had to do some fishing, and this is where things got ugly. There’re a couple of areas where you can catch the event fish and the first one was packed!

People were selling the needed fish in chat for large sums of gold. Other people were shouting they wanted to buy fish. And a third faction was cursing out the people selling the fish for ruining a Christmas event (reminder: not a Christmas event) by their greed. I decided to move on to the second spot to fish in. It was much less crowded and after maybe 5 minutes I had the fish I needed. Turned them in and back to Brega who sent me off to Betnikh for some big party. At that point I’d had enough running back and forth for one night so I left the rest for another time.

Each completed sub-quest got you a box of stuff. Some event motifs, some recipes, some silly trinkets like fake swords so you can do a sword swallowing emote, and some materials for making the holiday crafted items. I dunno what happens when you get through all of Bregas stuff. I assume there is one per race so I should have 4 more to do.

Its kind of sad that these events can bring out the worst in people. The folks who need to have EVERYTHING as soon as possible just seem to get crazy at the start of events. I don’t understand why anyone would care if someone was selling those fish. Personally I don’t see the point of buying stuff…I mean catching the silly fish is part of playing the game. But I guess for some people the point is to Have All The Things rather than to play the game. Or possibly they’re crafters who want to have all the motifs so they can sell holiday-themed gear for major amounts of gold.

Anyway, it all kind of turned me off the event. People shouldn’t be getting so angry about a game; games are supposed to be fun.

Also, I watched Tipa streaming some of the Final Fantasy XIV holiday event and from the few minutes I watched (I was at work, shhhhh) it seemed much more narrative-based and much less “OMG GET STUFF NAO!” than the Elder Scrolls one. TESO’s event felt like “OK we wrote some lore about this festival, now let’s dole in out in bite sized chunks via isolated simple quests.” while FF XIV seemed like it was telling the player a story. I’m a little bit jealous of FF XIV players right now.