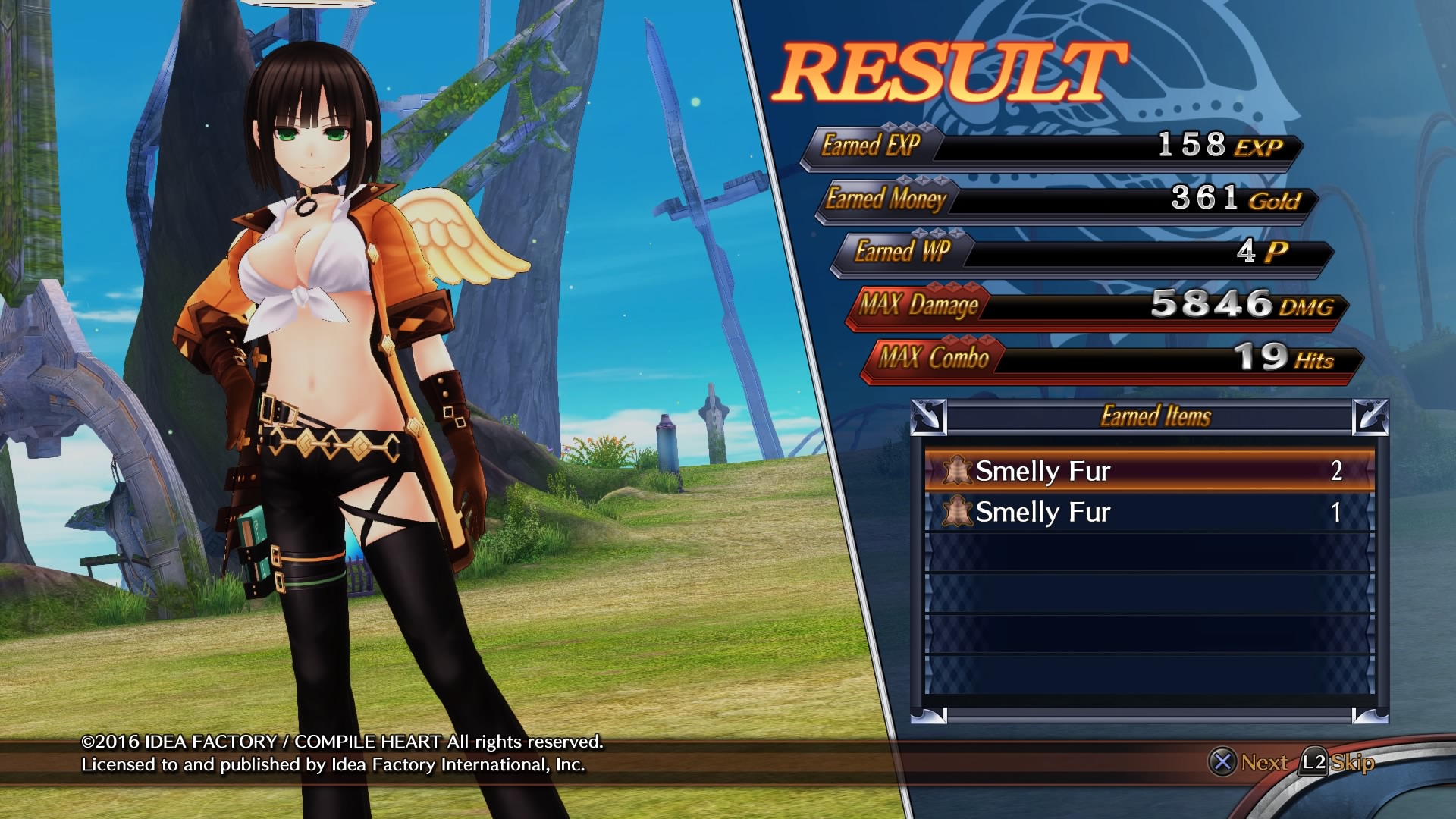 Last night was Fairy Fencer F night! I started the night by doing some grinding but then things really picked up. Added two new Fencers to the party and got to enjoy some really silly cut scenes. I thought I was just weird finding this game funny but Angela was in the room and I heard her chuckle a few times too, so it’s not just me after all. I also had my first tough boss fight. Y’know the deal…you beat, or nearly beat, the enemy and then he moves into a whole new, much stronger, style of combat. Complete party wipe the first time, but fortunately they give you Save Points just before boss battles. Got him on the second go. We also uncovered some mystery about one of our characters…but learning more about that will have to wait for next week!

I wanted to describe the combat system this week. FFF is an old-school RPG. Almost everything is completely turn-based (I’ll talk about the one exception below). You move around on a dungeon map, then when you encounter enemies (and at least they’re not hidden) you move to an encounter map (which is just an empty space, there’s no terrain). Your party and the mobs take action in order according to their agility (and any modifiers).

When it’s a character’s turn to go, they first move around the map; how far they can move depends on their movement stat, and they can’t clip through each other or enemies. Early on movement is pretty rote but later when you have a bunch of characters and some mobs get AOE attacks you’ll want to start putting some thought into positioning. Basically there’ll be a circle around the character, the radius dependent on the Movement stat, and you can push them around in that as much as you want before confirming your move.

When movement is finished the character can attack using either weapon abilities or skills/spells (both of these draw from the same SP pool). Of course you have to be in range of the mob. Characters unlock various weapon abilities as they progress and you can set up “Combos” of these abilities. This basically means binding abilities to face buttons on the controller. I’m still puzzling out the benefits of combos, but one aspect is clear. Certain abilities will launch an enemy into the air, and certain abilities are designed to do bonus damage to launched enemies; so you want to chain these two types of ability. This is the one place the combat isn’t turn based. If you use an ability that launches an enemy, it’ll slowly sink back to the ground. You’ll want to hit it with a bonus attack before it lands, but even here it’s not exactly reflex-based…it takes a few seconds for the enemy to land so you have plenty of time.

If you don’t want to use basic melee abilities, you can use Skills or Spells. I don’t think there’s a practical difference between these two; they both use up a characters SP (what we’d call mana in the west). Skills are unique to a character so there’s that, while different characters might have the same Cure spell, for example. You open up a menu to cast skills and spells (or use items for that matter). Again, old school. One of my gripes is that some skills can target more than one enemy via a cone or wedge and lining these up just right can be kind of fiddly. You use the analog stick to do it and it would be great if you could use the D-pad to nudge your target area around.

Each character also has a special ability unique to him/her. Fang’s special is “Serious Face” where he does extra damage but uses SP with every attack. Harley’s is Analyze, which she uses to expose strengths and weaknesses of an enemy. Self-centered Tiara can cast Barrier, a shield around just herself (let everyone else fend for themselves!) and Galdo has…the name just went out of my head, but his ability does increased damage but has a lower chance to hit.

And finally characters have a “Tension Meter” that fills up as they dish out or take damage. When it gets high enough they can “Fairyize” (these terms kill me!) which lets them transform into something that looks like, well, a transformer, as imagined by a child. Along with the transformation you get a cheesy 80’s rock anthem theme song and a ridiculous animation that shows that character being impaled by their Fury before transforming. When you get tired of watching the animation, holding the R2 shoulder button will speed you through it (this works almost any time, making it easy to blast through fights against trash mobs). In Fairyized mode characters just seem to be more powerful. There’re also a few Skills that you can only activate in Fairyized mode. These tend to do good damage at some cost.

And that’s about it for combat, aside from something called Avalanche Attack that I’m still trying to figure out. So far I’ve had no need of it but I’ll revisit if and when I suss out how it works. Right now it just triggers from time to time and I’m not exactly sure why! It has something to do with a Guard Gauge that only started appearing late in tonight’s session after Harley upgraded her Analyze skill.

If you’re a gamer of a certain age this combat system will feel like a comfortable old pair of slippers. If you didn’t game your way through the turn-based era, you might find it all horribly slow and boring.

Here’s a couple of short videos showing combat against a group of low level foes, and against a single (slightly) more powerful foe.