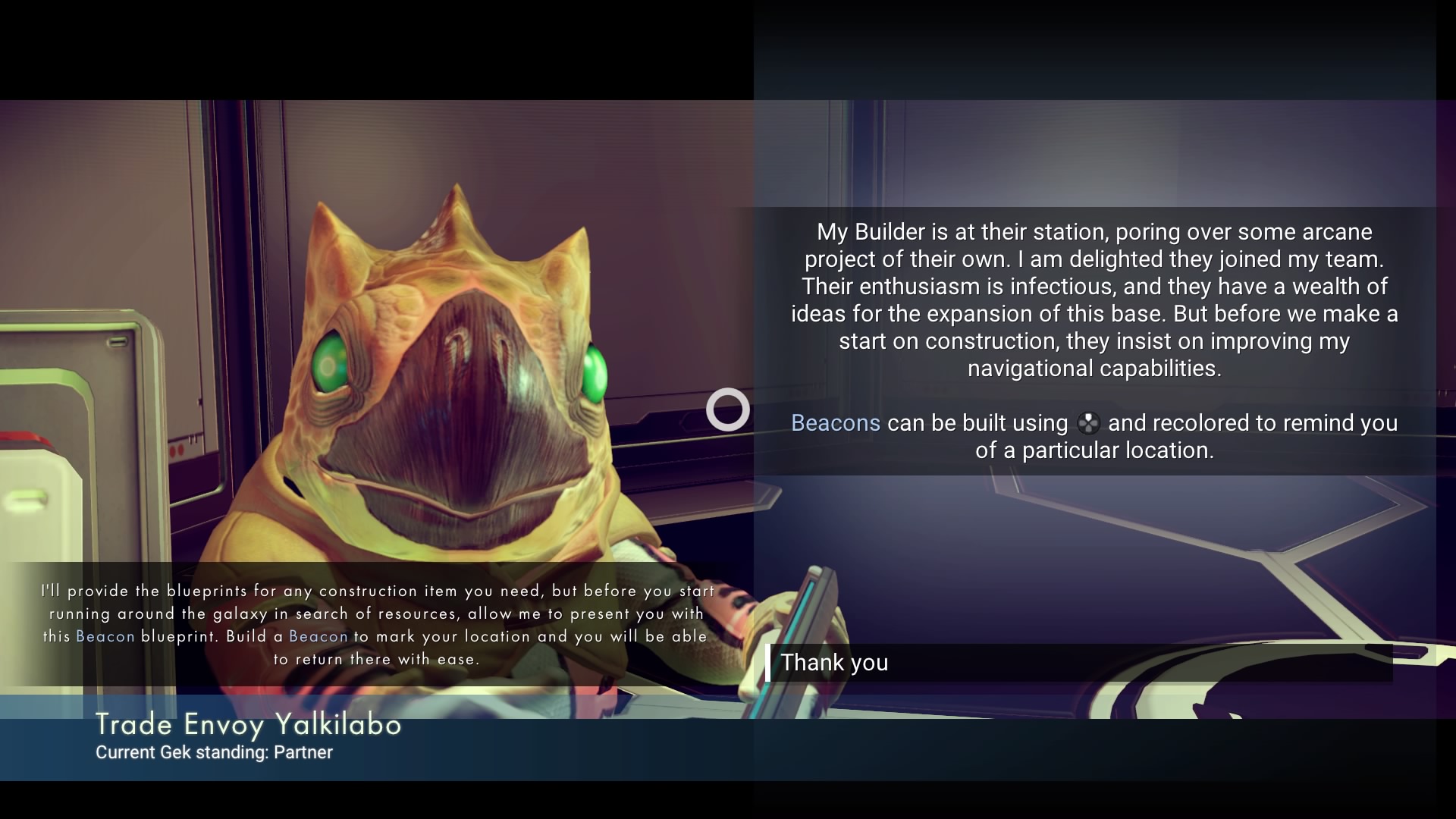 I’ve declared Thursday nights to be No Man’s Sky night at Pete’s Gaming Imperium, at least until I get bored of it. So far the Foundation Update is keeping me entertained.

I’m still working on my base. Last night I added a farm and a couple of storage lockers. The lockers are pretty small. Only 5 slots per. Hmph.

To do farming, first you build a console, then you find a Gek to run it. I was in a Vykeen system so had to go in search of a Gek employee. Fortunately for me, the next system was Gek. Of course while I was there I had to scope things out. It was a smallish system but it intrigued me. The first planet had toxic rain, so bleh. It did have a “base starter” on it though. The second planet was a low atmosphere planet which (for reasons only Sean Murray understands) means it has a lot of mineral resources. There was plutonium everywhere, there were clumps of those ‘flowers’ that give up isotopes, and huge chunks of iridium and other minerals. Just to cap things off, Sentinel presence was low. A nice place to gather resources but who wants to warp between systems for that? Well the third planet was a desert-style planet with lots of succulents, so-far non-threatening wildlife and pretty chill sentinels. Not the perfect planet but it was next door to that “mining planet.”

Thanks to Aywren I knew it was possible to build a base on this planet but at first I missed one key step. I built a signal array but every time I asked it to search for a habitable base, it pointed to the one on the first planet I’d visited. Finally I realized what I was doing wrong. I had never actually gone to that base. So I jump in my ship, fly across the system (stopping to kill some pirates on the way), find the base on the other planet, step inside to trigger that I’d found it. Then back in the ship, back across the system…fight more pirates along the way…and back to the desert planet. Then I built another signal array (way easier than trying to find the first one) and I searched for a habitable base and bam, one is found about a half hour away. Just a few seconds via ship.

So I head there and claim my new home and start rebuilding. Of course I lost some materials — you only get ‘most’ of the materials back when you move your base. I had enough to build the rooms I needed and re-position all the terminals (at which point my employees suddenly re-appeared, not that I’m complaining) but could only build one vault. *grumble*

Oh so I was talking about farming (I’m actually writing this at 1 am which maybe isn’t the best time for blogging). To do farming you build the console and hire a Gek to run it. Then you build hydroponic stations and from there you can plant things that the Gek gives you ‘seeds’ for. The seeds are basically blueprints. You still need materials to place the plants. I only had materials for two hydroponic stations and one plant. I have to go caving to find that exotic material you find in caves… Terium maybe? Again, 1 am. Anyway there’s an exotic material that I’ve always found in caves so I need to go get more of that. I find a smallish cave near my base and scored enough terium to make the Voltaic Cells I needed to build a second storage vault, but not enough to plant another plant. And that was all for the night so I never even got to see how long it takes for a plant to produce results!

In the meantime my construction guy is to the point where he’s giving me things like blueprints for decals, so I guess I have all the main building bits done. My armorer needs me to get him some medicine from a snowy biome and the scientist is always sending me off to check out radio signals and such. I feel like I’m probably pretty close to the end of the ‘how to build a base’ quest line, but we’ll see.

Here’s a view of my base from a nearby cliff. It’s still pretty sparse on the outside. I have schematics for all kinds of decorative flourishes but I’m still working on the functional stuff and I’m not sure I want to decorate until I know I’m settled in. This is my third base location so far.

One thought on “No Man’s Thursday: Working on my base”