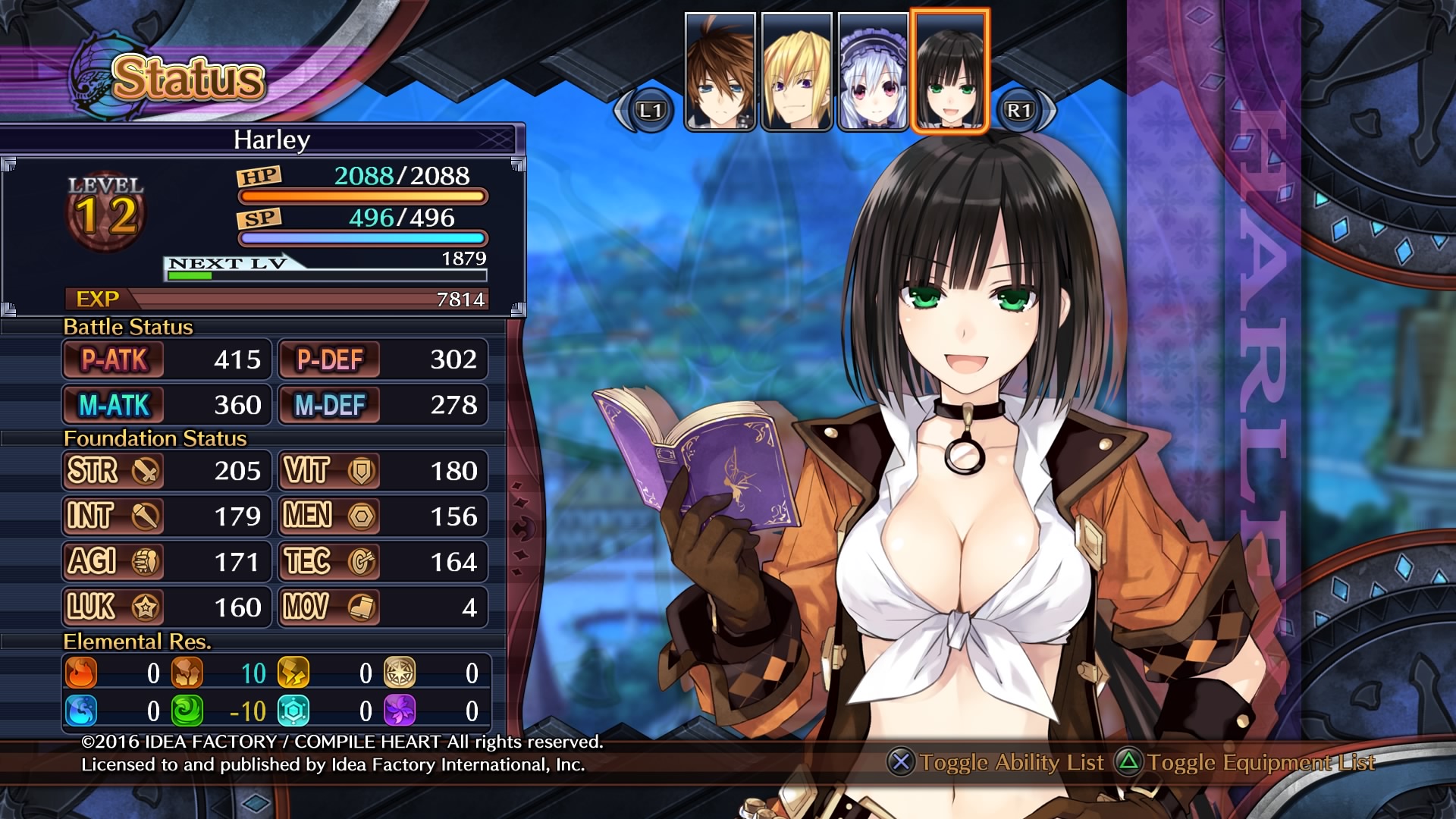 As I mentioned elsewhere, I’ve decided to devote Monday evenings to playing Fairy Fencer F, Advent Dark Force on the PS4, a turn-based JRPG that doesn’t take itself very seriously, at least so far. (I’m about 13 hours in; howlongtobeat.com says the main game takes 30 hours, which for me means probably 40+ because I’m slow.) BTW the original Fairy Fencer F is available on Steam (and PS3). The Advent Dark Force version, as I understand it, adds an ‘evil’ path to follow. I’m following the Goddess of Light path in this first playthrough which I think is the same game as the Steam version.

OK first some background:
The basic goal of the game is to collect furies. So what’s a Fury? A Fury is a powerful weapon that houses a fairy. They are wielded by fencers, skilled warriors who for some reason can wield these weapons. When a fencer chooses a fury he or she basically binds with the fairy inside.

In game terms each character has a fury, which means he/she has a fairy she is bound to. These fairies are basically NPCs that show up in cut scenes. As your party collects additional furies, the fairies inside them become available to equip on each character, and an equipped fairy will level up and get more powerful. OK that’s enough for the rest of the post to make sense I hope.

The main, or at least first, character you meet is Fang, a young man who is a complete slacker. Through some process I’ve already forgotten, he winds up with a fury inhabited by Eryn. Eryn is a fairy who has lost all her memories and she hopes if she and Fang go in search of other furies then she might meet a fairy who can help restore her memory. Fang is completely uninterested in becoming a fencer (“It sounds like a real hassle.”) but Eryn tempts him with the promise of meat (and food in general). Off they go.

In typical JRPG fashion you start the game alone and quickly add members to your party. The second character you meet is Tiara, a pretentious know-it-all who wants to collect furies in order to release the Goddess of Light because she’s heard that whomever does this will be granted a wish. She (from her point of view) enlists the help of Fang and Eryn. Tiara’s fairy is Cui, a cute little cat-thing that only says “Cui” over and over because every JRPG has to have some kind of cute creature that can’t speak.

One of the more uncomfortable bits about the game is that every so often Fang will be really mean to Tiara and her reaction is to become attracted to him. Kind of a weird message there; that women are attracted to verbally abusive men. I hope at some point this turns around and Tiara punches Fang’s lights out.

Next we meet Harley. Harley is a “fairyologist” (the game is sprinkled with intentionally dumb terms like this) and she wants to find furies to study the fairies inside. She’s always trying to study Eryn which makes Eryn very uncomfortable, and her advances often seem sexual in nature. Harley’s fairy is Bahus, a kind of father-figure who spoils her. Harley is also something of a trope: the bombshell character who is also a complete slob. Her fairy is always scolding her for not bathing or changing her clothes. (At least I think that’s a trope. I can’t give specific examples but I feel like I seen this kind of character before.) Soon after we meet Harley she decides she is too warm and removes her clothes, giving the devs an excuse for a bit of fan-service. Not that she ever wears very much, at least above the waist.

Next we meet Galdo and his fairy Marissa. Galdo speaks with a Canadian accent if Canadians actually spoke like Bob and Doug McKenzie. Marissa is a rather maternal fairy who refers to Galdo as Galdie-kins. I’m still getting to know Galdo but he seems like he’s going to be the heart of the team.

And that’s as far as I’ve gotten. There’s room for six characters on the combat field and an option to switch out characters, so I expect the cast to continue to grow.

Before tonight the whole game has been kind of a snark-fest (which I didn’t mind too much, I get a chuckle out of fictional characters being snarky to each other) but story-wise, Galdo really stepped up tonight. I think he’s started to wear off on the others and they’re starting to be a little bit nicer to each other. I’m finding myself pretty curious about what’s going to happen next.

The other thing that happened tonight is that gameplay wise, I hit a difficulty spike. I’ve been chewing through enemies pretty much on auto-pilot, just hitting the attack button over and over. I was doing that tonight when all of a sudden I noticed Tiara was KO’d. I didn’t even notice she was low on health. What followed was a frantic re-adjustment as I tried to get her rezzed while keeping the baddies at bay via spells and special skills. I hadn’t saved in quite a while so it was a bit of a panic!

I made it through that fight, healed everyone up then did the sneaky-sneak thing to try to get out of that dungeon without too many more fights (you can only save at Save Points while in the dungeon). Then I headed back to town to visit the shop to stock up on potions and the game’s equivalent of Phoenix Downs. Bought some new gear too. I went back and paid attention and made it through but had some really good, fun fights.

So now I’m looking forward to my next session. I’m interested to see if the group can rise above “Let’s just be asses to each other” and start to behave as a team, and I’m excited to see how hard the next dungeon is.

Next week I’ll talk a bit more about some of the actual game systems. So far I’m liking Fairy Fencer F: Advent Dark Force, but at the same time I’m glad I got it for $12 or so on-sale. It’s fun but it’s not game of the year material or anything.

Until then, here’s Galdo fighting in a bath towel: