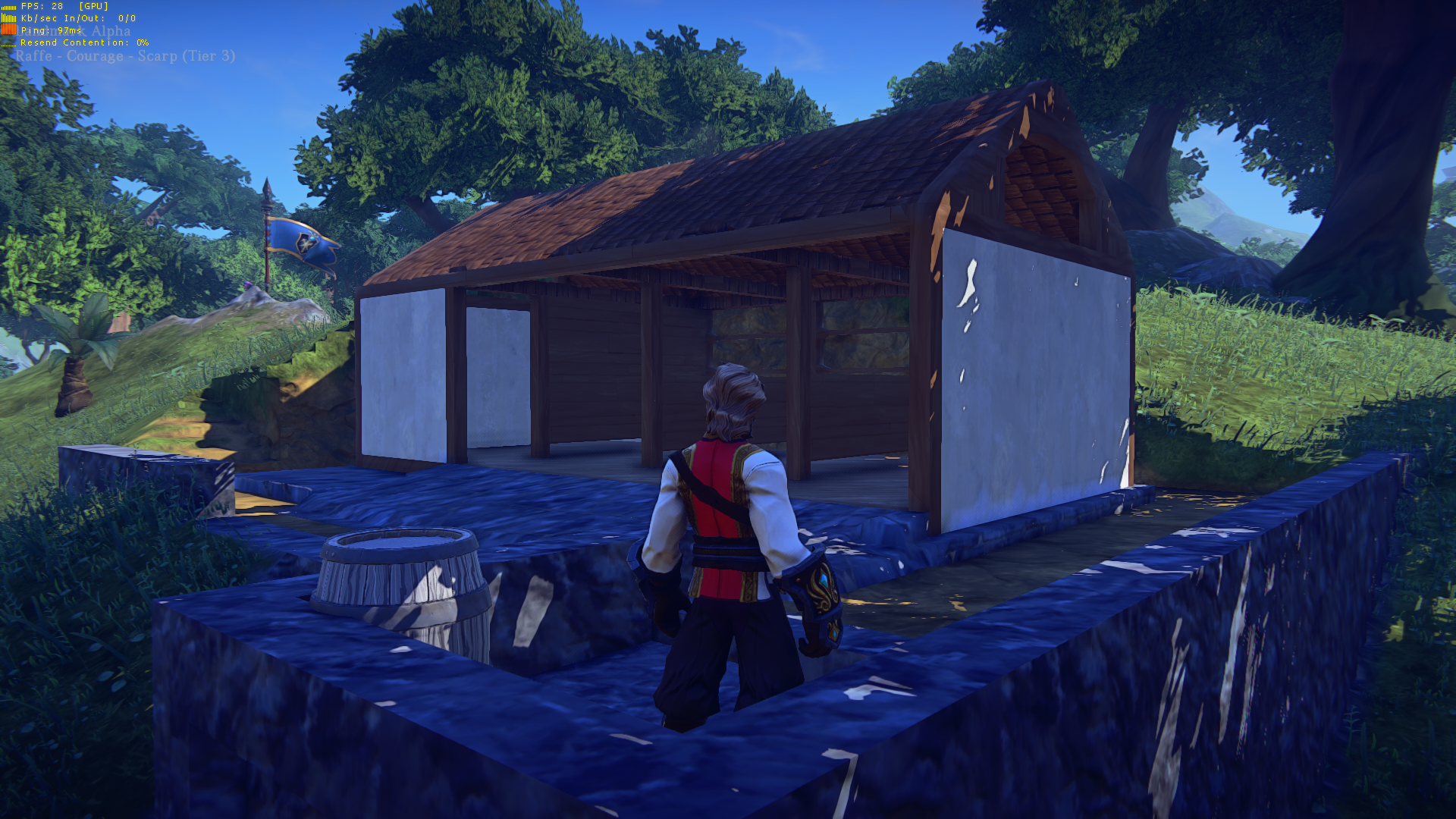 The more keen observers among you may have noticed that I’ve stopped writing posts about Everquest Next Landmark. The fact is I’ve cut way back on playing it for 3 main reasons.

First, I’ve done as much as I want to do over again. 🙂 I ground out all the gathering I needed to do to make all the building tools and that was plenty, since I know everything is going to be wiped when we transition from Alpha to Beta. I actually didn’t mind the grind: mining is actually pretty fun (chopping trees much less so) but I don’t know if doing it all a second time will be as much fun. So now when I do log in it’s just to play around with building.

I should note that templates will survive the transition from alpha to beta, so I could be building cool things to throw down come beta but…

Second, I’ve become kind of discouraged. Early on I was building stuff that I actually felt a little proud of, but every day we see a dozen incredibly awesome projects that make mine look like crap. So unless I’m going to quit my job and live off of someone else’s money so I can spend 8 hours a day working on my Landmark claim, it hardly seems worth ‘pushing’ to get anything built right now. When more facets of the game get put in there may be more practical reasons to build; we’ll see. Or maybe I’ll just have fun gathering and fighting. This is my Sour Grapes reason for not playing.

Third, I made the age-old mistake of visiting the forums. As with just about every official forum in MMO land, it’s a toxic place and spending time in it just leaves me not wanting to have anything to do with the game or the community. What makes the toxic forum situation worse than normal is that, in theory, we bought into alpha so we could have a voice in the design of the game. And that may be true, but the only way to be heard is to post more frequently than everyone else. See above re: 8 hours/day to devote to the game. Any and every suggestion is attacked viciously by a contingent of people who want nothing to change, ever, and the only way to be heard is to post the same thing over and over and over. Meanwhile, every suggestion is attacked as “dumbing down the game.” I swear if you suggested “The game should crash less.” someone would give you shit over that. [Disclaimer: The game has never actually crashed for me.]

At the same time when I do log in, the populations across the servers are all “LOW” now, so it’s pretty clear changes need to be made to give normal players a better reward/hours spent ratio if you want them to stick around. I’m sure the dev team knows that as well as I do and that they aren’t taking the forum mafia too seriously, but it’s still a discouraging situation to be in the midst of.

By the time beta rolls around I’m hoping the forum toxicity effect will have worn off and I’ll be excited to jump in and start playing again. I still watch the weekly live streams and follow the devs on Twitter. I’m still excited to watch the game develop. I’m just no longer interested in being a part of that process. I don’t want to be a part of the EQNL forum community; I just don’t have the time or the patience to deal with the ‘hardcore’ contingent there. Now to be fair, there are definitely some saintly folk who’re in there trying to actually help. I can’t imagine how thick their skins must be but I admire them for fighting the good fight.

Tangent: The whole “dumbing down” thing really bugs me. We need a better term. Because when they complain about ‘dumbing down’ EQNL what they really mean is “making it less of a time sink.” In real world terms, if you wanted a swimming pool and started digging the hole with a shovel, and I came along with a backhoe, would you accuse me of “dumbing down” your swimming pool project? I doubt it.

For prosperity, here’s the project I was working on before I realized how pointless it all was.

This is an early version of what wound up being a stable, or intended to be a stable. Mostly I’d been working on creating the roof with the angled beams built with the line tool The covering is wood thatch and you’ll note it’s running in the wrong direction. I never did figure out how to get it oriented properly.

Same building but I’ve changed the walls and that’s about it.

Here’s the finished (for now) building seen from the hill behind it. I trimmed in the open ends of the walls while leaving plenty of space for a cool breeze to blow through. I replaced the thatch with wooden shingles which are also running in the wrong direction.

Stables from the front. All the way to the left is a storage area. It never rains or gets cold on this island, making the open design an easy choice.

To make these thin cross beams I used the smoothing tool over and over. But see how they flare out where they meet the vertical posts? I haven’t yet figured out how to prevent that from happening. The engine seems determined to make the adjoining faces the same size (I paste in beams with no flare but as soon as they touch the vertical beams they just ‘blossom’). I can sometimes get it so the vertical beam caves in to become skinny but that’s no better.

The whole building from another angle.

And here’s the approach, though this was taken before I fixed the roof. H is for the Halasian Empire Annex. 🙂

12 thoughts on “What happened to the EQ Next Landmark posts!?”