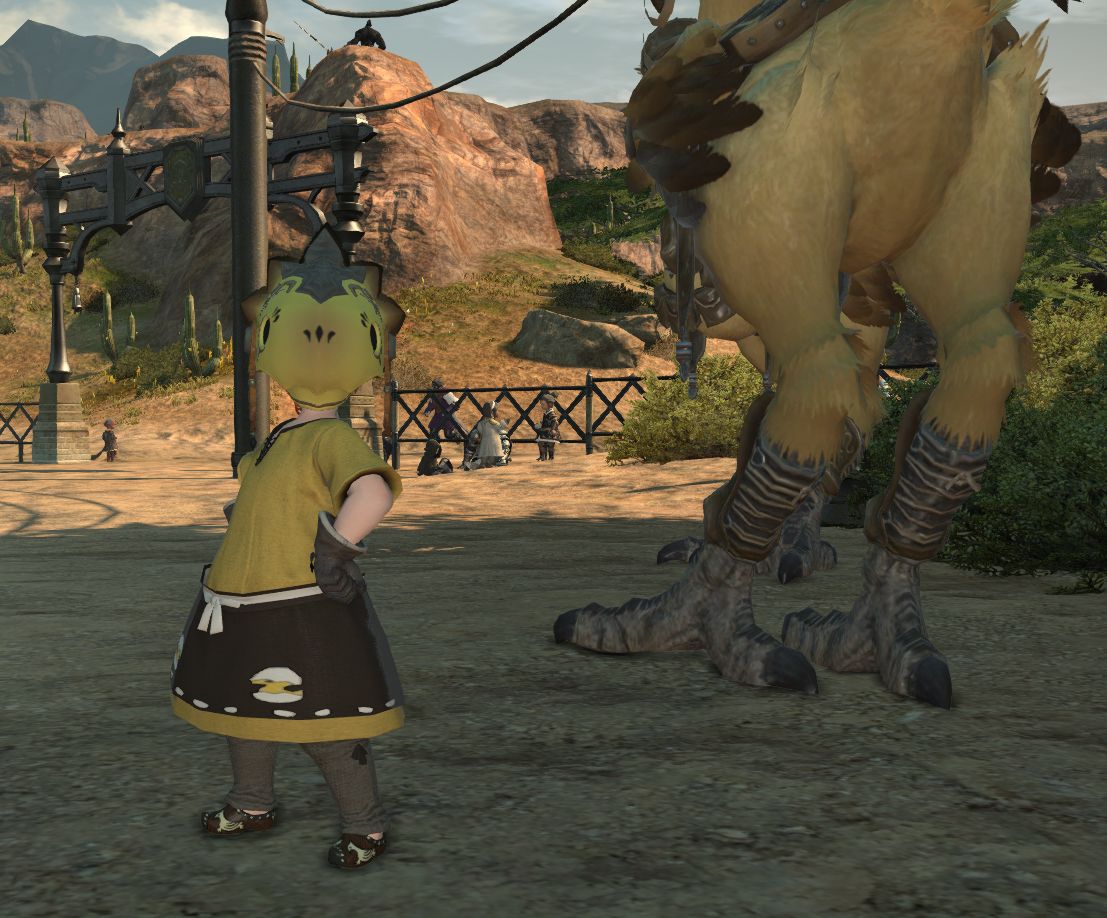 I’m not much of a joiner. Although I love MMOs I don’t often join guilds or groups since I don’t like feeling obligated to others. I’m pretty selfish when it comes to my leisure time and want to do what I want to do when I want to do it. Yeah I’m kind of a dick. I’m also a classic introvert and I find that spending time with people drains me, even when I’m having a lot of fun doing it.

When FFXIV launched I chose the Gladiator class because he was a melee class, and I enjoy a good dust-up. I don’t remember if I even researched the job enough to know it was a Tank class; when you solo all the time “role” becomes pretty meaningless.

But Square-Enix fooled me. They built a game where grouping is required, assuming you ever want to unlock everything the game has to offer. At level 15 your “Story Questline” takes you to your first instanced dungeon, and completing the story questline leads to unlocking things like mounts. My first thought was that I’d just grind levels until I was over-powered and then solo the instances, but you can’t (at least I don’t think you can) because you get scaled down to an appropriate level when you enter them.

I remember clearly when I hit this quest. It was late on a Saturday night back in September or thereabouts. I thought “Well it’s almost 2 am… I probably don’t want to get involved in this tonight, I’ll do it in the morning.” Sunday came and “something came up” and I did’t play FF XIV. Monday came and something else came up. Tuesday thru Thursday came and went. Then October, November, December and January came and many things came up and I never went back to do that quest. Every month Squenix sent me an email saying “You’re going to be billed for a month of access in a few days” (I wish more MMO companies did that!) and every month I’d think “I really want to get back to FF XIV…I’ll keep the sub.”

A week or so ago I finally bit the bullet. Of course by this time everyone else doing these instances has done them a dozen times and they expect everyone to know what they’re doing. I admitted this was 1) my first time doing the instance and 2) my first time tanking (in FFXIV…in the past I’ve tanked with friends in other games), and I could hear the groans flowing over the internet. Fortunately one of my groupmates was patient and gave me advice and we got through the instance with no deaths, but the whole time I knew I was doing a crap job of tanking. By the time we finished I was so stressed I was sick to my stomach. And then I realized another dungeon instance followed. So I logged out.

But I really wanted to see more of this game. So I came up with a new plan. Be a brain-dead DPS. There’s not much stress on a DPS as long as they don’t do something actively stupid and I figured even I could avoid that. So I switched jobs to Archer and started leveling that up (FF XVI lets you do all jobs on a single character).

You really can’t do any grouping until you hit level 10. Well I guess you could form a group but there’s no real point to it. At level 10 you unlock Guildhests which are repeatable group quests, like mini-instances I guess. As soon as I hit level 10 I started queuing for them with my archer. Sadly until level 15 there are only two of them to queue for (that I’ve found anyway). But the levels go very quickly.

Last night I repeated these things 4 or 5 times, and I think this was a good decision. Standing in the back firing arrows let’s me get used to reading the Party Window and target windows so I can quickly see who has aggro and who is in danger of getting/losing it. I’ve been playing around with the various markers and setting up some /assist macros and things like that.

I’m also getting used to the idea of just joining 3 random strangers to enter a battle. Sometimes everyone says hi, sometimes no one does. Sometimes people chat a bit at the end, usually they don’t. But so far no one has been an ass, and that’s important to me too. If I have enough good-neutral experiences in random groups, when I run into a bad one (and we all know that’ll happen eventually) I’ll at least be able to have good experiences to compare it to.

Now I’m actually looking forward to hitting level 15 so I can go back into that dungeon I did as a Gladiator. And I’ve been thinking about switching back to tanking at some point, too. This is way outside my comfort zone but so far at least, I’m enjoying myself. And I’m kind of vaguely proud of myself for overcoming my reluctance to do group content and trying to embrace the fun of it.

Heck I have half a mind to actually join my friends in some kind of multiplayer game!

2 thoughts on “FF XIV: Pushing me out of my comfort zone”