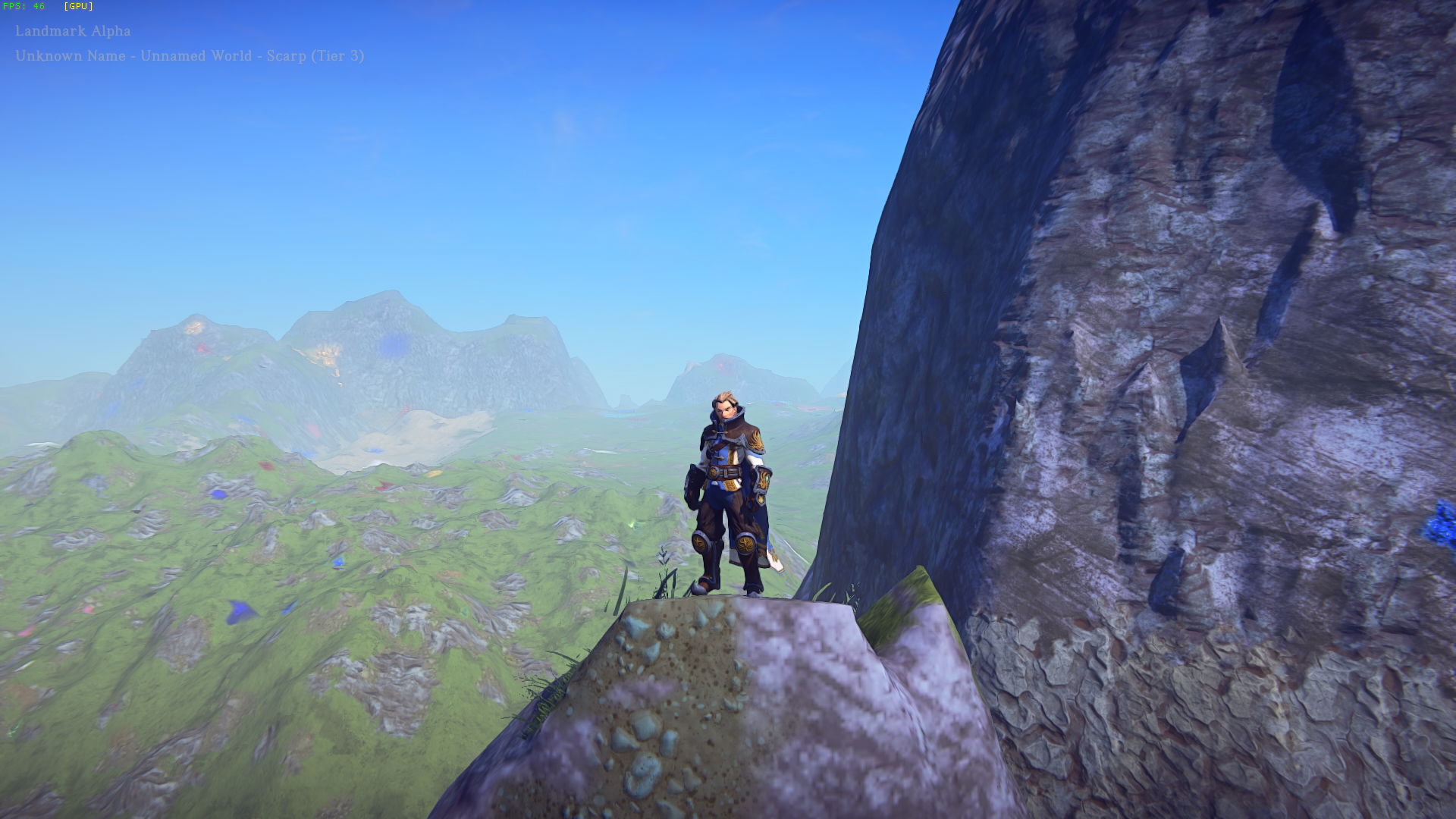 This weekend the EQNL team is getting some much deserved rest, as far as I can tell. In a way, we players are getting a rest too. There was a fairly big patch on Friday, as well as a couple of European servers rolling out, and since then the game worlds have been up and running and we players have been able to stuff ourselves on Landmark goodness without having to worry about whether the worlds will be up.

I think the biggest aspect of the patch was the new system for finding available land for Claims. Instead of the confusing cross-hatch of 3D claim cubes you now get a map that is tinted red where you can’t build. It’s MUCH easier to find any available land on an island.

I was happy with my mountain-top claim on a Tier 2 island…right up until I started needing materials that were only found on Tier 3 islands, at which point the run back and forth to the Spire to jump between islands started to bug me. Saturday morning I island hopped around, checking a dozen islands on the Courage server, and found a new claim spot. It was close to the Spire, but not too close, on a Tier 3 island (Scarp) and in a wooded area. It’s not as cool a location as my mountain top but it is more practical and I’m pretty happy with it.

New Player Tip #1 Find a claim on a Tier 3 island. Yes, it’ll mean you have to go elsewhere to get started but you move through the stuff found only on Tier 1 & 2 islands really quickly. While you’re gathering materials like copper you don’t even really need a claim. You can use crafting stations that other players have built to get you going. [This tip expires the day SOE gives us some kind of ‘teleport to spire/claim’ ability.]

The big Friday patch did have some rough spots. Lots of people are struggling with trees and boulders popping up on their claims, over and over. And I noticed the camera has gotten a little jittery when harvesting. The camera tries to move when something occludes your view of your character and with this latest patch it seems to be trying to compensate for particles and/or your character’s pick head at times. So as these items move across the screen the camera flickers in close, then back out again.

Still the game feels in good shape, the servers are running with populations between medium and low, and things seem on track.

We’re starting to see some really incredible building projects crop up. As usual I refer you to Dave Georgeson’s twitter feed for examples.

I haven’t built much yet. I’m still working towards getting all the tools, and practicing techniques in little ways. Here’s the crafting station area on one corner of my claim:

In terms of tools I now have Add, Delete, Heal, Select, Smooth & Paint. I REALLY want to get to the Line tool but it’s going to take me enough time that I’m not sure I want to bother during alpha since I know this will all get wiped. We’ll see though. I just finished making a Tungsten Reinforced Saw Table which will let me build a Gold Trimmed Work Bench which will let me work Amaranthine so I can make an Amaranthian Forge which will then, I think, let me craft my Line tool. Each of those steps will probably take me a few days of harvesting materials.

There’s been some debate on whether or not we should have to craft these tools. My mind is really divided. On the one hand, crafting the tools gives you a concrete goal to stretch for, so if you’re into the whole RPG Progression mentality, these are awesome ‘rat pellets’ to strive for. On the other hand, at least right now, Landmark is a building game, and making people do a lot of harvesting just to start making cool things seems like gating the fun.

[My feelings about this are changing now that tools are becoming so much more time consuming to get. The early ones come pretty fast.]

I do find mining fun, but harvesting wood is pretty tedious since it’s so passive. Target a tree, hold down a mouse button until the tree goes away. Walk 2 steps and target another tree. Repeat until you’re nodding off at the keyboard. In mining you first have to find an exposed gleam of minerals, then start digging, following the seam. It’s not rocket science but at least you feel engaged. Though when I started to need a bunch of elemental gold, even mining started getting tedious. You see, you find gold at the end of a seam of tungsten. So to get elemental gold you first find tungsten. Then you mine out that seam of tungsten until you get to the wad of gold at the end of it. Then, hopefully, you get a some elemental gold. You don’t always (and sometimes you get two). I think on average you probably get 1 piece per gold seam, but when you need 30 of them… it can start to get to you.

I know the amounts of materials you need for making all this stuff is in flux, and I’m guessing it’ll be toned down some. And once there’s combat and stuff in the game I think the whole vibe will change. We’ll see.

The building tools are cool though. I wanted to share one tip I learned. I already wrote it up for Google+ so I’m just going to cut and paste:

One thing that hadn’t occurred to me until I watched a couple of videos, is using the Smoothing tool with the Select tool. In these shots the upright posts used to be perfectly rectangular posts with razor sharp 90 degree corners. I was going for something more rustic so I used the Select tool to encompass an area around them. It was flush against the walls behind them but had some ‘buffer’ on the sides and in front.

Then I hit the Smoothing tool once or twice and here’s what I got.

I’m still not happy with the horizontal boards. One of them looks like living room wall paneling from the 1970s. The other is better but a little too perfect for my tastes. In an ideal world I’d be able to streak them with dirt or even leave tiny gaps between the boards here and there.

(These are supposed to be retaining walls that keep my dirt hole from caving in on my crafting stations.)

New Player Tip #2 Craft a grappling hook as early as possible. Not only do they help you get out of holes you’ve literally dug yourself into, but they help you travel faster too. Here’s a too-long video of me running out to my old claim but you can see how the grappling hook really helps climb hills, and it’s fun too!

I guess that will do it for today’s update. I can’t wait to see what the week brings now that the team has most of the fires under control and can get back to adding new functionality to the game!