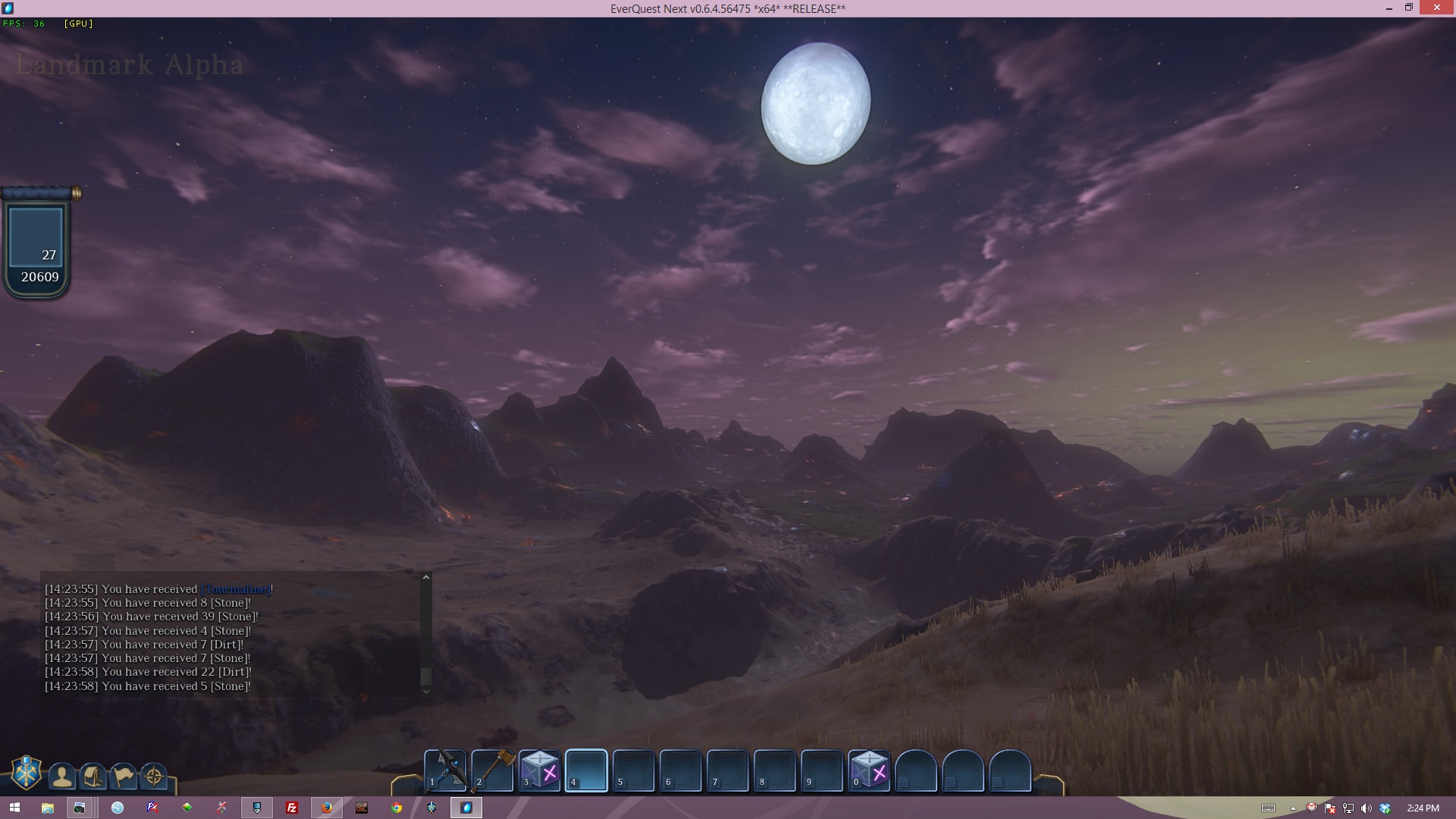 Late last night, Sony opened up Alpha access to Everquest Next Landmark. It happened very late for me, but I was able to at least log in and create a character before I went to bed. I entered the world, gathered a bit of dirt and stone, built a little wall thing, and then I HAD to go to bed.

All night I was like a kid waiting for Christmas Morning. At 4 am I got up, walked in and looked at the computer… then my inner adult took over and I went back to bed.

When morning came I dragged poor Lola (she’s our dog) around the apartment complex as fast as her legs would take her so I could get back in and play.

And I played as much as I could today. Which wasn’t nearly enough to scratch my itch. I am LOVING the direction they’re going with this game.

I’m also loving the transparency. Yes, it’s alpha. A for-real alpha with missing features and UI elements that SOE freely admits suck (and that they’ll be improving) and stuff getting lost and characters getting locked out of servers. So what did they do tonight? They lifted the NDA. So the Alpha NDA was in place for less than 24 hours.

The downside is I didn’t bother capturing screenshots or anything since I figured I wouldn’t be able to share them. So forgive the wall of text.

So what’s the game like? First, graphics. Beauty is in the eye of the beholder but I’m finding the world rather breathtaking. STUNNING skyboxes and when the moons come up I sometimes have to just stop and gaze at the sky. The character models are a little more subjective. I like them a lot. They feel vaguely Victorian, vaguely Steampunky. I think they’re going to be pretty polarizing but from my own selfish point of view, they rock.

Gameplay? Well for now this is just a building game. Enemies and combat aren’t in there yet (that’s how alpha it is). I spent most of my day running around the world harvesting materials.

A lot of people are calling it “Minecraft on Steroids” and sadly, I will too. Imagine if Minecraft wasn’t all giant blocks and you’ll have a good idea of what Landmark is like. When you gather rock, your pickaxe breaks up an irregular chunk of ground (and materials autoloot themselves into your backpack). Dig a tunnel and it isn’t a nice rectangular area. It’s chaotic and cluttered and rough.

One of the first things you’ll need is copper. When you see a glint of copper on the surface you start digging and you soon realize there’s a actual seam of copper. If you follow it, below it you’ll often find tin, and below that… gold? I’m not sure… a metal I can’t yet mine. But digging out these seams of metal is, for reasons I have trouble articulating, super fun for me.

In fact I spent most of my day doing just that, filling my pack with stone, copper, agate, tourmaline, and of course dirt. Oh yeah, and ogling the projects other players have been working on. One clever player staked his claim at the peak of a mountain and is sculpting the top of that mountain into a castle or a citadel or something.

Let’s talk real briefly about claims. In alpha everyone gets a flag to stake a claim with (later you’ll have to craft these flags). Angela and I found a spot pretty easily and staked our claims next to each other. But neither of us did much with them. I flattened some space and set out some torches. Then we ran off to gather and I haven’t been back since. There’ve been issues with claims disappearing, or things on claims disappearing, so SOE is looking to fix that ASAP.

Between alpha issues and just regular Saturday chores, we only got in 3-4 hours of play so there’s still a ton to explore. I won’t admit how much time I spent just running around, sliding down hills and flipping over obstacles and sliding more. Just running around in this world is fun.

Servers are down for a fix this evening… I can’t wait to get back in. I’m having so much fun already and this is just the start. I only bought a Founder’s Pack to keep Angela company but I am SMITTEN by this game.

Next time I hope to have some screenshots or video to share!

One thought on “Day 1 of the EQ Next Landmark Alpha”