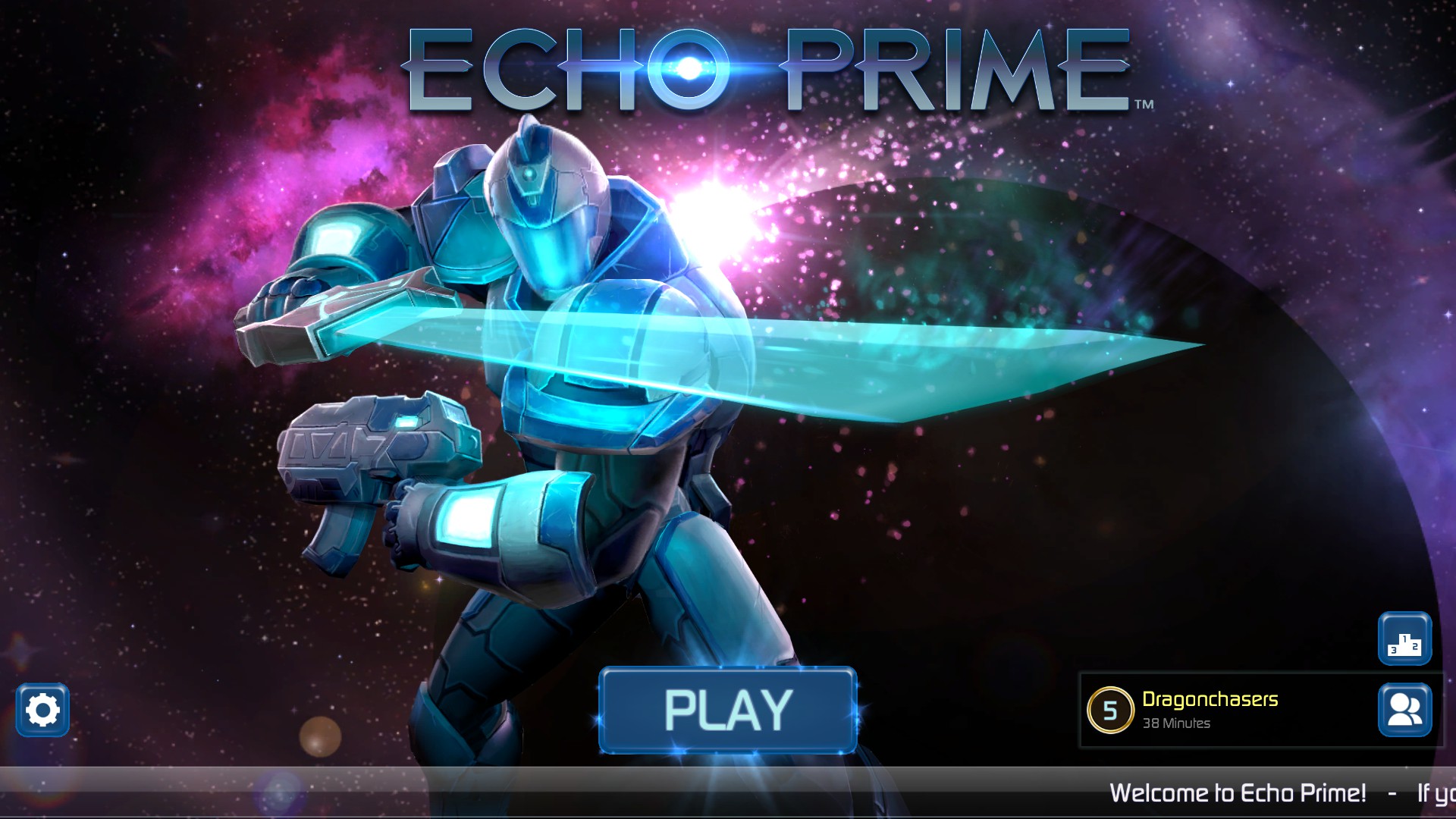 Early this week Robot Entertainment’s Echo Prime hit Steam. Between the fact that I’ve really enjoyed Robot’s earlier titles, Hero Academy and the two Orcs Must Die games, plus the fact I know someone who works there, I had to jump in and take it for a spin. Echo Prime is $7.99 until February 9th, $9.99 after that.

Echo Prime is a port from mobile platforms (iOS only, I think) and there are times when it really shows. For one thing, there’s a Gamecenter icon linking to the (non-working, as far as I can tell) social function, at times you’re given instructions like “swipe to dodge!” and the game feels designed to be playing in 10 minute chunks. There’s essentially no narrative to trip you up. You just jump in and start shooting things.

Basic gameplay has you blasting and slicing up bad guys with sword and laser. The levels are super short and tend to be fairly two dimensional (corridors running left to right). You run through a mission, level up your character some, get some coin to buy better gear, and repeat. It’s simple but pretty fun. The “Echos” of the title are entities who lend you special abilities during fights. You equip them, fight while being BFFs with them, and they seem to level up too. There also a system where you can ‘borrow’ Echos from Friends but I had no Friends and wasn’t sure how to get one. For me, I could rent a friend for 100 credits (pretty cheap).

It’s not super deep, but a game doesn’t have to be super deep to be fun, particularly an $8-$10 game.

Obviously on iOS you controlled Echo Prime by tapping or swiping. On the PC you can use keyboard and mouse, or controller.

With keyboard and mouse, you click to move, click on enemies to either melee or fire at them (depending on their range) and either click on skill icons, or tap the number keys, to fire off Echo Skills. WASD are used to dodge, right mouse button is used to block. Holding down Shift will lock your character in place while he shoots; a MUCH needed feature since gameplay is fast-paced enough that it’s easy to miss when trying to click on enemies. This all works, but I couldn’t help but wish I had direct control of the character using WASD. But I feel the same way about Diablo, so take that into consideration.

Steam doesn’t list controller support, but Echo Prime does support a controller and it plays much, MUCH better with one, with the exception of a few issues. Controls are (using an Xbox Controller’s iconography):

A: Melee
B: Shield/Block
X: Ranged attack
Right analog to dodge
Left analog to move
Echo Skills are bound to the D-pad, with Skill 1 triggered by pushing left, Skill 2 by pushing down, and then presumably around the dial.

With a controller you choose if you want to shoot a guy in the face even though he’s punching you. There’s some aim assistance going on to keep the pace of the game up. Dodging with the right analog stick feels much more intuitive to me than using the WASD keys.

The only problem is that some Echo Powers require you to draw a line on the ground. When you trigger one of these powers, the game slows way down, giving you time to draw your line. It’s pretty easy to do with a mouse (and probably really easy with your finger on a touch screen!) but feels super clumsy with the controller (you draw using the analog stick). I mean, technically, yes it works, but it’s more frustrating than fun. I quickly decided I’d just ignore any Echo Powers that required me to draw a line.

Worse, I eventually came to a mission where I had to capture, rather than kill, enemies. You use the Space bar to capture and I couldn’t find a way to do it using the controller. We need a way to map that to a shoulder button or pressing down an analog stick or something.

Basically I think Echo needs a patch or two before it’s really ready for Prime time. (See what I did there?) I’d like to see Robot work on polishing controller support, and totally rethink mouse and keyboard support. Give us direct movement controls via WASD and let us melee and shoot with the mouse, fire skills with number keys and block with the F key or something. I think it’d be a lot more fun to play that way. I’d like to see the difficulty curve tweaked (it needs to get harder earlier) and perhaps re-do the ‘line-drawing’ Echo powers so they just through out a straight line perpendicular to the player.

But don’t get me wrong, it’s already fun to play and c’mon, it’s $10 at launch. It’s probably not going to become your primary game, but it’s a great game to fire up when you have 10 minutes to kill and just want to run around and clobber bad guys for a few minutes. And then a few more to get one more level. And then a few more because you almost have enough for that flaming sword. And maybe just one more level because your favorite Echo is going to level, too.

You get the drift.