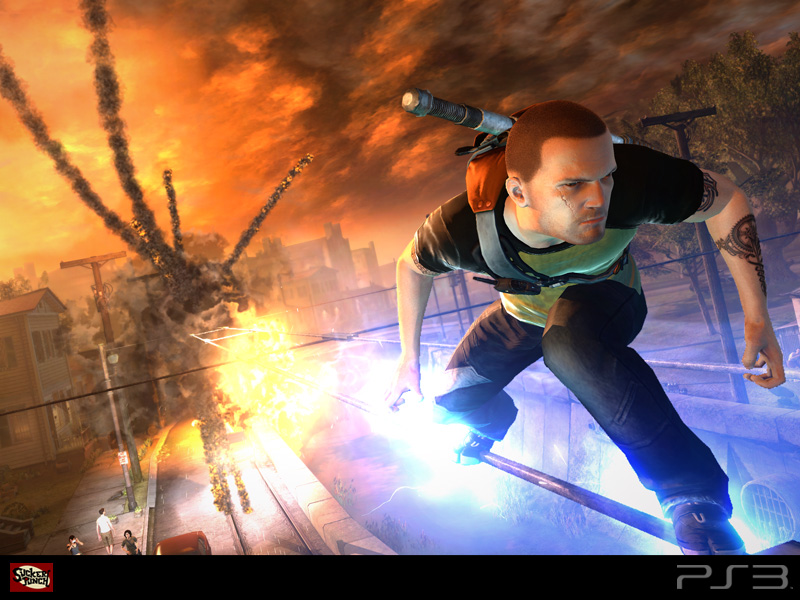 I’m pretty excited about the Playstation 4 that is headed our way in a couple of months, and I’ve been gearing up for it by trying to cut down my ‘pile of shame’ of PS3 titles I’ve wanted to get to.

One of these in Infamous 2. I played through the first Infamous and enjoyed it a lot, and one of the big early releases for the PS4 is Infamous: Second Son, coming some time in early 2014. I bought Infamous 2 when it first came out but somehow got distracted and never got very far.

So when I picked it up again a few weeks ago, I was stoked for another great gaming experience. But I had to bail out of my first session with the game early when motion sickness kicked in hard. I broke out in a sweat and my stomach was threatening to expel i’s contents. I had to go lie down for a while and wait for the feeling to pass.

Infamous 2, in case you haven’t played it, is a really twitchy game. The controls are super-sensitive with a very small dead area on the sticks. Plus there’s a lot of parkour-like climbing that’s made really easy by giving the character feet that tend to stick to anything remotely resembling a rail or a ledge. This means that sometimes your character will jerk a little in one way or another to help you stick a landing, even if you weren’t intending to land.

It makes the game really fun because you can easily do crazy things like jump off a tall building and land on the tip of a light pole, but I think it really aggravated my motion sickness. Just that little lack of control was enough to throw my inner ear into fits.

So the next day I went back to Infamous 2 and played for all of 5 minutes or so. As soon as I felt a bit of discomfort, I stopped. And I did that again the following night, and the night after. By about the 4th night I was up to 15 minutes or so. At this point if I started to feel a little queasy I’d pause and look away for a few minutes before continuing.

The nice thing about Infamous 2 for this ‘regime’ is that there’s tons of collecting items and simple side quests to do, so I could play for 15 minutes and still feel like I made a little bit of progress.

The body, or at least my body, adapts quickly and now, a few weeks later, I can play as much Infamous 2 as I want without feeling bad. Sometimes after a really intense battle I do have to pause, get up for a drink or to pet the dog or do something other than look at that moving screen for a few minutes, just to let my eyes and stomach ‘settle’ a little, but it’s no biggie now.

I’m just sharing this story in case anyone else out there suffers from motion sickness in gaming. You can overcome it through regular, short-duration play sessions. Don’t let yourself get sick…stop before you do. You don’t want your sub-conscious to develop negative associations to gaming (though that would probably save you a lot of $$)!

I will admit that I now make sure to play at least a little Infamous 2 every other night or so. I’m afraid if I leave it for a week I might back-slide. So even on busy nights I’ll log in and chase now a blast core or break-up a robbery or an abduction or something. Just to stay ‘video game fit.’ 🙂

And I’m glad I did this because Infamous 2 is pretty good so far, and there’ll little references to things I’ve seen mentioned in previews of Infamous: Second Son. By the time that game launches I’ll be ready!