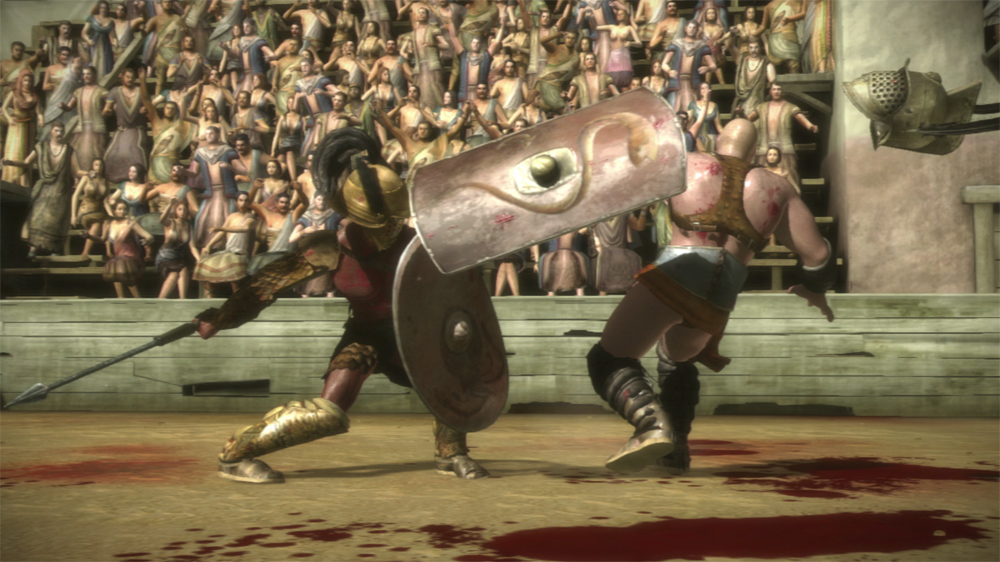 Spartacus Legends is a free-to-play fighting game from Ubisoft that hit XBLA and PSN recently. It’s based on the Starz gladiator series. Already all kinds of alarm bells should be going off in your head, right? A F2P game based on a TV show!? Yegads.

I’m not sure why I downloaded it but I did and tonight I fired it up and surprise! It’s actually not too bad. The core here is a gladiator fighting game, with all the gore you’d expect, plus plenty of salty language just in case we were confused about whether or not a game where you can slice your enemy’s face off their head is meant for children.

The fighting engine… well listen, I’m not a fighting game guy. I can’t remember combos and when I can remember them I don’t have the dexterity to pull them off. But I can play Spartacus Legends, which probably means if you’re serious about fighting games than this is going to be way too basic for you. But for this kind of game/audience, going a bit more casual was probably the right move. Your face buttons are light attack, heavy attack, a block breaker and a grab. Left shoulder button is block, right shoulder button, along with analog stick, let’s you roll. There are combos here if you can figure them out. I felt like after a while my fingers had figured out a few without my brain really parsing what they were.

What I like about Spartacus Legends is the strategy/rpg wrapper around the fighting game. You’re trying to build up your stable of gladiators to make your house/school/ludus famous once again. You start with one poor bastard armed with a piece of junk sword, a busted up shield and a loin cloth. As you win fights you’ll gain both coin and fame. You use coin to buy better armor and weapons, additional gladiators and cells for them to sleep in (more cells = more potential gladiators).

As you gain fame, you (you as in the faceless guy/gal running the ludus) can access more and more lucrative (and dangerous) venues to have your gladiators fight in. I just dipped my toe in the second area after an evening’s play. Early battles are non-lethal (through the magic of Hollywood I guess) but as you advance the “Lethality Meter” increases. It’s probably going to suck when one of my favorite gladiators gets killed. 🙁

Your gladiators also earn Perks for winning battles. One of the earliest for instance is “Hard Headed” which gives that Gladiator +10 defense.

Of course things get expensive pretty fast, and that’s where the F2P stuff comes in. Instead of earning coin you can just buy it with real money. Gold coins, in particular, are pretty hard to earn and some of the better gear can only be purchased with gold coins. Also each Gladiator has a finite number of Perk Slots (1 to start) and replacing a Perk with a new one costs Gold coins.

There’s an Online Battle component that I stayed far away from. With a game where real $$ can get you the best gear I don’t want to have anything to do with PvP. But if you stick to the PvE side of the game, you can have a pretty good time without spending any money. I may buy some Gold Coins just to support Ubisoft if I play for much longer.

Spartacus Legends isn’t going to win any game of the year awards or anything, but it’s worth downloading some evening when you just feel like something a little different. And gory. And foul-mouthed.