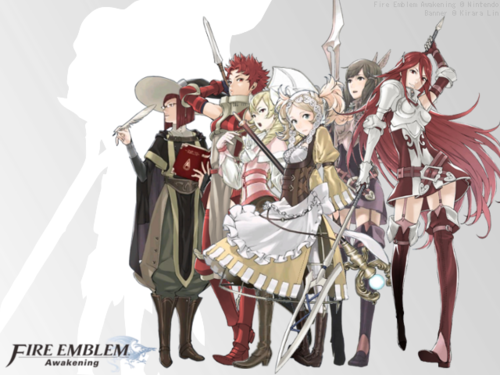 I’m still playing turn-based, tactical, strategy-RPG Fire Emblem: Awakening on the 3DS. Have been, off and on, since it launched. Suffice to say I love the game.

I’ve actually got two games running at the same time. The one I started first is in “Classic Mode.” Fire Emblem traditionally has had a perma-death feature. If a character dies in a battle, that character is dead forever. The only exception to this (in FE:A) are two of the main characters. If either of them dies it’s an immediate Game Over. If a character who dies is important to the story, he or she will still appear in cut-scenes (when they ‘die’ they leave with a snippet of conversation saying something about needing to withdraw) but you can never use them in battle again.

This, we’re told by the nebulous entity known as gamers, is how we “should” play Fire Emblem and I agreed with that. Perma-death definitely adds a lot of weight to the decisions you make in the game. Of course the reality is that if a truly beloved character falls in battle, you can always reset the 3DS and avoid the dire consequences. I suspect many people play this way. In fact at times I think you have to. Losing 1 character is heart-breaking, yes, but if a battle goes south and you lose 4 or 5, you’re going to be in a world of hurt trying to advance through the game.

At one point in my first game I felt like I had played myself into a corner, so I restarted in Casual Mode. As of now I’ve put about 17 or 18 hours into my Casual game and 10 in my Classic game.

And *drum roll please* I’ve determined that Casual is (for me anyway) actually a more exciting way to play! And here’s why.

In my Classic game I am EXTREMELY cautious. I grind constantly, taking on easy challenges over and over again to level up my characters so every ‘real’ battle is a cake-walk. I haven’t lost a character since Ricken bit it back in February. It’s all rather boring but I can’t help myself; these are my friends, I can’t needlessly risk their lives in battle!

In my Casual game, though, I take chances all the time. I’ve had battles where I went in with a dozen warriors and came stumbling out with 3 barely standing, but victorious. The fights sometimes come down to the wire and I find myself almost holding my breath. I think for me having to re-play the battle if I lose is enough to make me really want to win.

Now on the other hand…in my Casual game I have too many characters. I really only need a core team. With no risk of death there’s no reason to have ‘spare’ characters, so to speak. But for me, I find leveling these characters to be fun so I’m still doing extra quests to level everyone up. But the game is clearly designed around the idea that you’ll lose characters and will need to replenish your army, so there are way more characters than you ‘need’ (or at least can be…many of them come from the DLC or the random armies that pop up via the Wireless menu).

I think if I was King of the World I’d decree that Fire Emblem had some ‘middle road’ mode. Basically it would be Classic Mode but the player would have some kind of (onerous) way to resurrect fallen characters. It’d either be expensive or would incorporate a mini-quest-line that you had to play through, or something. So that when that character who you really, really love fell in battle you could decide to overcome the required obstacle to bring him or her back. But when Vaike fell, you’d just move on. Because really, nobody likes Vaike.