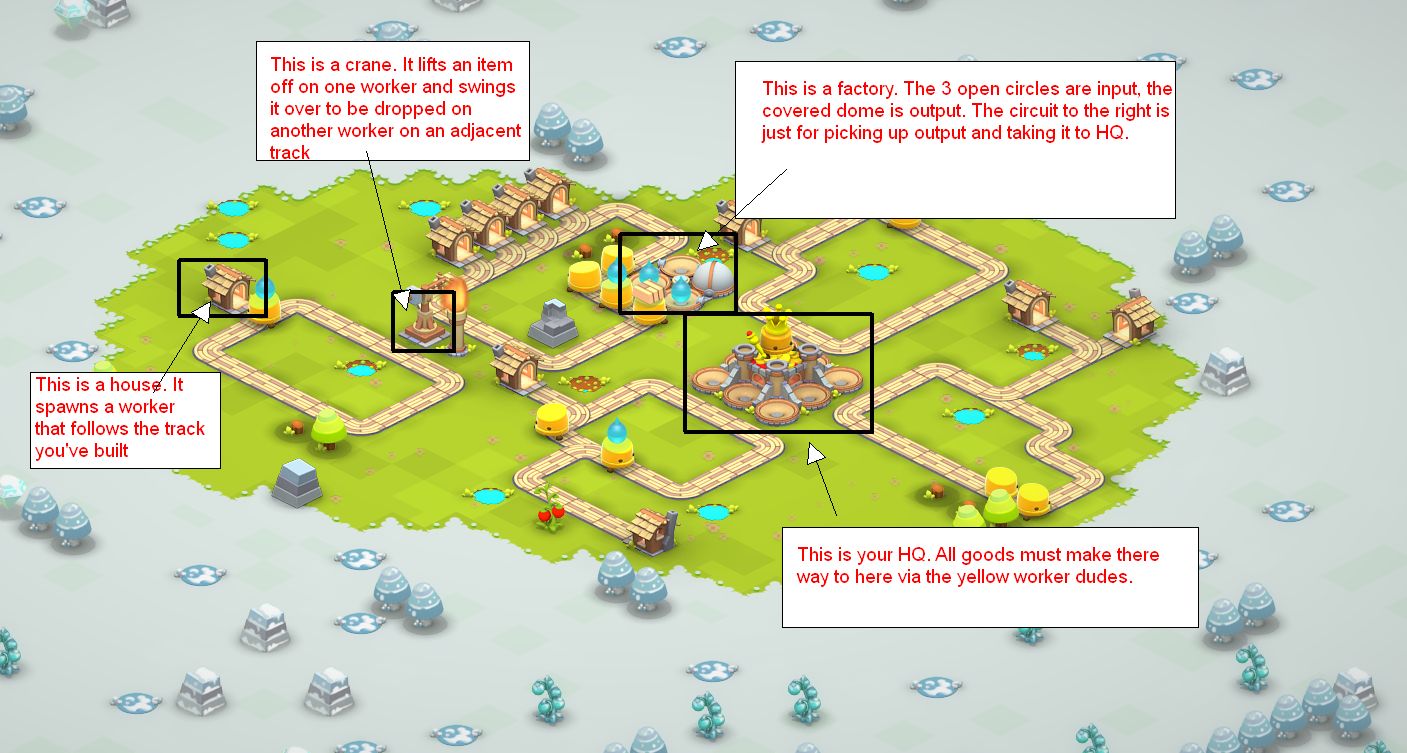 Let’s get one thing clear. I don’t know squat about LeapDay, a game from SpryFox that entered beta this week. I spent maybe 45 minutes figuring it out before I knew I had to share it with my friends.

LeapDay is a browser-based game that tasks you with gathering resources by way of laying down little tracks that your vaguely Gumdrop-shaped workers will follow. As a worker passes a resource he grabs a chunk of it. When he finds a place to put it, he drops it. That place could be your HQ (in which case you’ll get some gold) or a factory. When a factory fills up with resources it generates another, presumably more valuable resource. At that point you need a worker to come past the factory and pick up this more valuable resource to deliver somewhere.

That’s the basic gameplay. I’m not clear what the ultimate goal is… I know I was playing on a map with 7 other people and we had 3 days to beat a boss or unlock a final item or something. I was fixated on the basics, frankly. So before I go any farther, here’s LeadDay in action. Remember I’m still a noob and only have a few tools and a small amount to space to work in:

Every day your workers leave their little houses and start following their tracks and doing their thing. When night comes along they despawn, and resources all renew. Soon enough it’s morning and things start again. As items make it to HQ your town generates gold that you can spend on creating new loops to collect more resources. Your town will collect $$ even when you’re not playing, so there’s a bit of ‘time management’ gameplay here too. Eventually you’ll be able to buy towers that expand your usable area (I have one right next to the crane). I’m not sure what happens when you connect your playable area with another players; perhaps your tracks can mingle.

Here’s a crappy screenshot identifying a few parts of my ‘town.’ Sorry I didn’t do a better job with this… I wasn’t planning on using it for a blog post when I created it. Click through for the full size version:

For as cute as it is, I’m finding LeapDay pretty hard. Your workers only turn to the right and available space is cramped. If a track is too long the worker won’t make many circuits before the day ends. If it’s too short the worker might clear out all resources and just be running in circles doing nothing. The nice thing is you can sell parts back for full value so trial-and-error is definitely encouraged (though I do wish you could just move an item rather than selling it and re-purchasing it to place it in a new spot).

In that screenshot my main loop up top drops 4 workers (1 per house) into the track that feeds the factory. You can see all 4 going past the factor as I snapped the shot. The first two have dropped water in the first 2 factory slots. In a second the 3rd worker will also drop water into the last slot and the factory will generate an item. That lone worker on the loop to the right will come around and pick up that finished item and carry it to the HQ. Over on the left is a loop where a worker is feeding the main loop via a crane. Eventually the 4 workers will exhaust their resources and they’ll need more. The crane helps feed them. Towards the bottom right are 2 tracks that are just gathering basic resources and taking them to the HQ. Nothing fancy there.

As you can see my space is pretty cramped and it’s going to be hard for me to get more tracks to run next to the HQ in order to feed items into it.

Anyway, it’s a nifty game. It runs in a browser (you’ll need the Unity plugin) and is free to play. It won’t be for everyone, but it’s unlike anything I’ve played in recent memory and is definitely worth checking out, IMO.