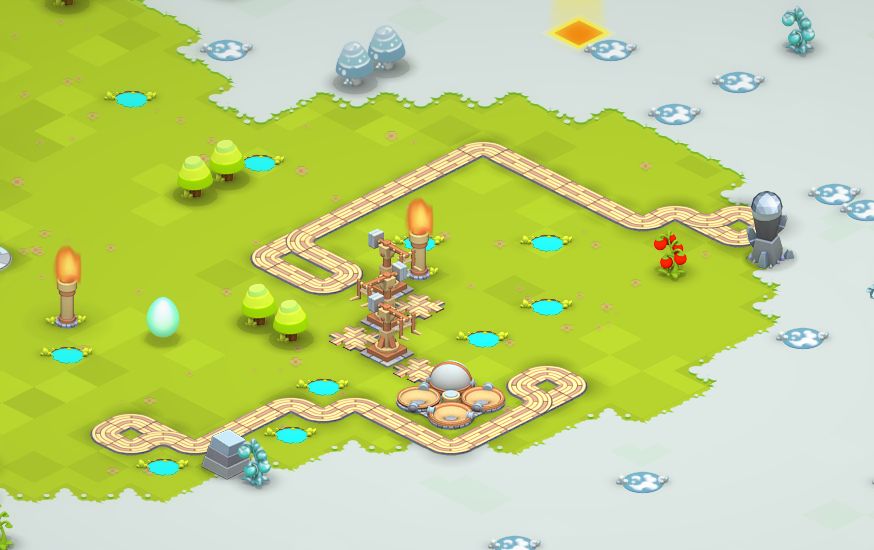 I’m still messing around with LeapDay and learning a little more all the time. The goal, as developer Danc pointed out in the comments to my last post, is to save the land from evil ghosts. In order to do that you have to (as step 1 anyway) defrost towers and then deliver a specific item to them. I’ve gotten a tower defrosted and found it needed Polished Gems, made with 1 water, 1 stone, and 1 wildcard (anything as the 3rd component).

I set up a track and a factory to build polished gems easily enough but actually getting the gems to the tower is going to be a bigger challenge. The Flans that travel the roads will pick up any resource they walk past. So I can’t run this deliver road past anything but the factory pick-up spot and the tower where I’m delivering the gems. Otherwise the Flan will pick up some other resource and just circle around with it endlessly (the tower will only accept Polished Gems). I solved this issue with an elaborate series of 3 cranes, as shown here (you might want to click to get the full sized version):

The problem now is I need 5 houses (at least) to spawn Flans. 1 for the Polished Gem making track, one for the delivery track, and one each for all 3 of those little 1 square sections of road (these will span a Flan who just sits in one place accepting a Polished Gem from one crane and passing it along to the next crane, I hope.

Sadly I don’t have the $$ to do that yet so I have to put my project on hold until later tonight. I still have really big questions around whether or not I’ll get a Polished Gem to that tower before the day runs out. I might have to add additional Flans to the builder track and/or upgrade from the cheap dirt roads to faster stone ones.

What a compelling game… you really need to try it. But be prepared to do a lot of thinking and trial and error when you do. For instance you might wonder why I don’t move the factory closer to the Tower. If I did that I’d pass more water resources and would be in danger of getting 3 water in my factory which would then produce (I think) a barrel of water, which the delivery system would hand off to the delivery Flan and the tower wouldn’t accept, thus gumming up the whole works.

After your first game (which takes 4 days of real time) you’ll unlock trains and train tracks.

This is 100% a co-operative game. You and the other 7 people on your map all win or you all lose. There’s no ‘score’ to compare yourself to other players so there’s no incentive to trying to ‘beat out’ the other guy. Quite the contrary.

5 thoughts on “LeapDay – Made it to a tower”