It’s been a long time since I blogged. During most of that time I’ve been playing Dragon Age: Inquisition. I resisted the urge to talk much about it because I was enjoying myself so much that I didn’t want to taint the experience by inviting spoilers or even spending a lot of time discussing the game’s faults. I was just reveling in the fun I was having rather than playing with a critical eye, if that makes sense.

I finished the storyline about a week ago after spending over 100 hours exploring the world. And there is still at least 1 place I haven’t visited and several I barely touched. Inquisition is a HUGE game.

The weekend before Christmas I was traveling for a few days, meaning I took a break from gaming. When I came back I found that Inquisition’s annoyances (and it certainly has some; it’s certainly not a perfect game) had started to bug me more, so I decided to finish up the storyline before I lost interest. (This event isn’t unique to DA:I; I find taking a break from a game often will break its ‘spell’ over me. I almost always quit MMOs after some outside influence forces me to stop playing for a few days.) My plan was that I would keep playing past the end of the storyline just to hunt Trophies and see more of the world.

But a warning to anyone with the same plan. Post-credits, the game changes in some subtle ways. Mostly your companions feel like they’ve all ‘reset’ to their default states or something. No longer can I visit Cassandra and have her tell me that it warms her heart to see me (I chose her as the character to romance). Instead she just gives me a default “Inquisitor?” reply when I talk to her. I haven’t noticed any party banter that acknowledges my choices since I finished either, though maybe that’s just bad luck. In general there felt like a lot less banter than in previous Dragon Age games.

My other problem is that I’m too high level and too well-geared for most of the gameworld. I remember how exciting it was to kill my first dragon, but now it feels like there is little risk in slaying the beasts. In fact I feel like giants give me more of a problem but I’ve out-leveled even them. There’s a trophy to kill 10 dragons in a single play-through that I keep saying I’m going to complete but I just can’t be bothered.

So I’ve pretty much stopped playing, but the problem is there’s nothing else like Dragon Age: Inquisition to fill that void. I’ve been bouncing between games hoping something grabs me, but so far no luck. Bioware absolutely left ‘hooks’ to hang DLC/expansion packs off of but I haven’t heard any news about them. Instead the company seems to be pushing multiplayer.

It astounds me that I put over 100 hours into a game and can still feel depressed that it is over. Usually I get bored with games at somewhere around 20 hours. Heck I haven’t played many MMOs for more than 100 hours. Inquisition is the Bioware game that finally ‘clicked’ with me and now I want more, darnit! I’m not even sure what it was that hooked me. Combat wasn’t all that astounding (I played on Normal difficulty and only used the tactical view to examine enemies. Nor did I ever feel a huge need to craft epic gear or think hard about what accessories to wear. After a break I’ll have to play again on a harder difficulty level.) The addition of a Jump button meant that terrain was often really annoying as I tried over and over to jump up a ledge that was no higher than a different ledge that I had just jumped up onto. The story was fine but not really vastly unique or anything. I guess it comes down to the characters and the interactions between them. I really did have favorite companions, and companions that I barely tolerated. They came to feel like real people, at least while I was actually playing. I even grew fond on non-companion NPCs, like Scout Harding. I also liked that each ‘zone’ could feel almost like a stand-alone story. And I’m very glad that I played the first two Dragon Age games just prior to Inquisition because the new game references events in the older ones; events that were still fairly fresh in my mind.

Dragon Age: Inquisition is without a doubt my personal game of the year. I’d sure feel better if Bioware would announce some additional content for it! 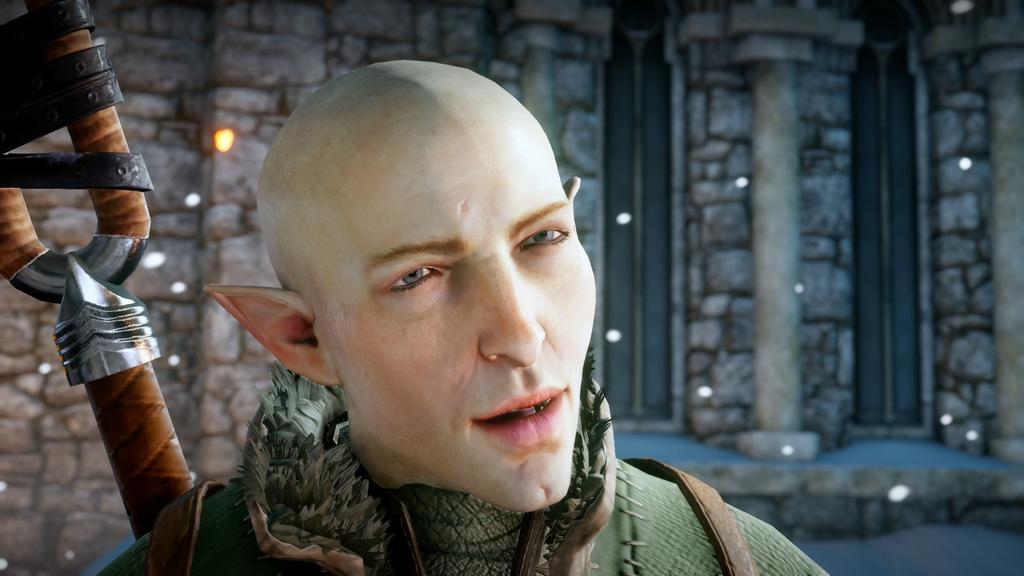 Saturday I wrote about how I wouldn’t be playing Dragon Age Inquisition at launch because I was in the midst of Dragon Age II and wanted to finish it before starting DA:I. And then madness happened.

It was a chilly weekend here so Lola and I didn’t do a lot of walking, and my Dragon Age fever was running high. I spent every free moment playing and by Sunday night I’d hit the 50 hour mark (I said Saturday morning I was a little over 30 hours but I think I must’ve been underestimating and was actually at 35 or even more) and I was deep into Act 3. And it turned out Act 3 was pretty short. Monday night I fired up the game and an hour later I was watching the closing credits!

Sunday I had felt like the end was drawing near (NPCs started foreshadowing the ending by basically saying their goodbyes) so I went ahead and pre-ordered Dragon Age: Inquisition for PS4. I wanted to get the bonus items and I wanted to have the game pre-loaded, just in case.

Monday after the credits I logged onto the Dragon Age Keep website and set up my ‘world state’ for DA:I. Got that done (had to fudge some things where I couldn’t really recall what I had done) and uploaded. Then I went downstairs and fired up the PS4 to make sure the pre-load for DA:I had happened and saw that the game unlocked at midnight my time. That was an unexpected surprise because so often on the PS4 things have unlocked at midnight Pacific time.

It was about 11:30 when I made this discovery so at midnight I went downstairs and starting playing Dragon Age: Inquisition.

So yeah, I finished Dragon Age II with just enough time for me to set up my Keep and then transition right into DA:I. I couldn’t have planned it this well if I’d tried, and I’m so excited to continue to experience the world of Dragon Age and to be playing the new game while all my friends are.