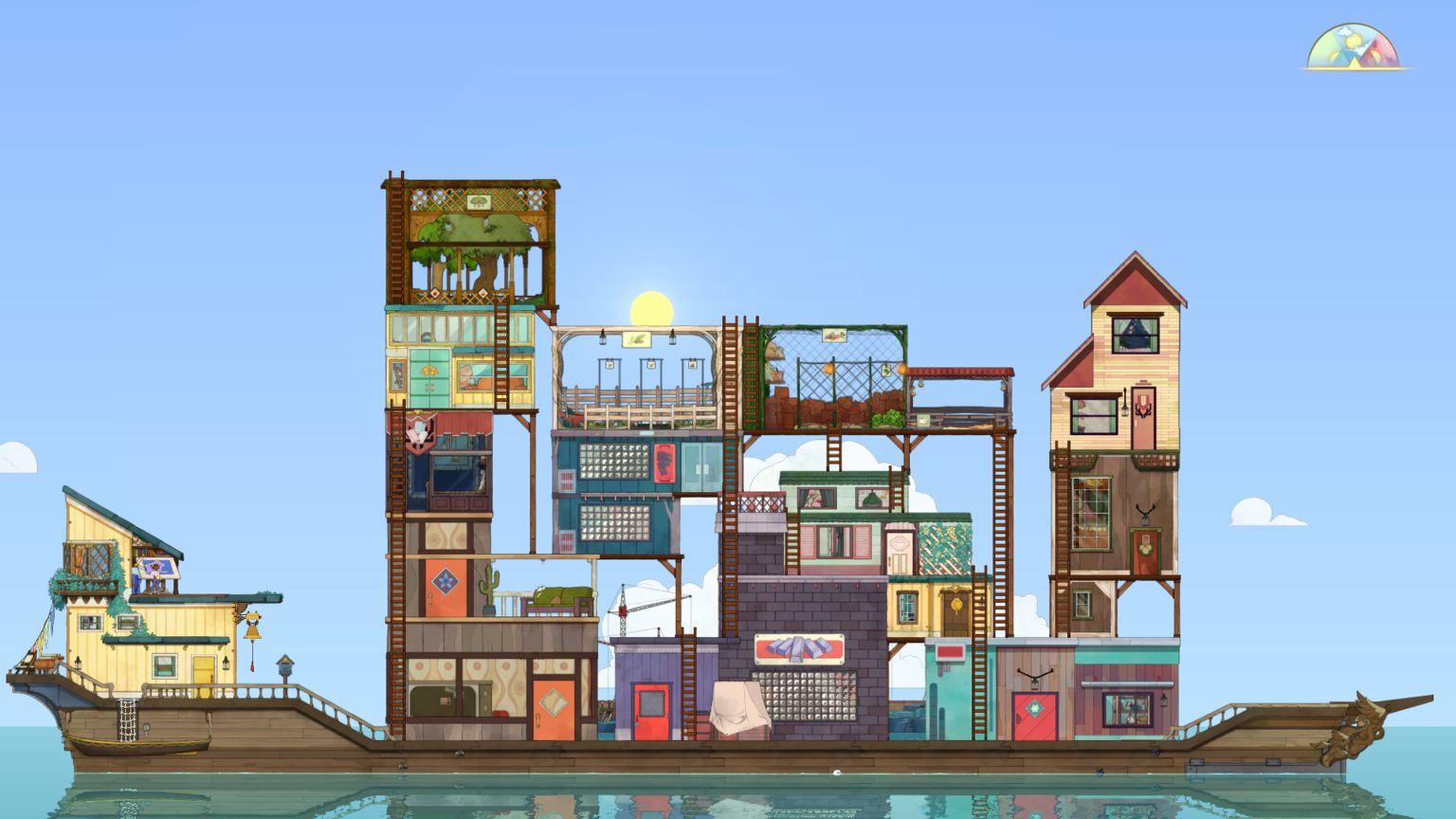 Regular readers (Hi mom!) know that I’ve had “cozy management game” Spiritfarer hovering around the back burner of my ‘currently playing’ stove {Wow, that really didn’t work, did it?} for a while now. This week I decided it was time to see if I wanted to finish it, or if I’m done with it.

A little more backstory: this game was on Xbox Game Pass and I only started playing it right before it left the service. I was having so much fun I bought it and then proceeded to not play it much. Because, just me being me.

Anyway over the last several nights I’ve gone back to it more seriously. The overall game loop is that you have a ship which is also basically a floating town (see header image). You sail around an ocean, visiting various islands in order to find spirits to bring on board. You then satisfy the needs of these spirits (often by building them a house on the boat, and then improving it), and eventually the spirits pass on to whatever comes next. Last night my first spirit left me and I think I might be done with Spiritfarer, myself.

This is one of those instances where I think it is an interesting game that I’m sure a LOT of people would enjoy, but it’s just not the right game for me. It is very, very chill. Very soothing. Soothing to the point where I sometimes literally start nodding off while playing. As someone who is perpetually tired, I’m generally in search of stimulation rather than soothing.

Most of my issues have to do with the pace of the game. You sail the ship, oh so very slowly, back and forth across the sea. When it gets dark your ship stops and you have to go and sleep to pass the night before you get going again. In theory while the ship is underway you can work on crafting but — and maybe I’m doing something wrong — but I find that takes up like 10% of my travel time. The rest of the time I’m just staring into space waiting to get to where I’m going.

Eventually you do unlock “Bus Stops” which are fast travel points, and that helps some. And just before I quit last night I crafted something that makes my ship travel 20% faster. Those might help but they also may have come too late for me. I’m just kind of bored. I go to a place, I gather some materials, I process them, I build a thing to make a spirit happy. Then I do the same thing again only with slightly better quality materials. As far as I know there is no fail state (maybe that’s what makes it cozy?) so there is no pressure or urgency. It is so very, very…relaxingzzzzz….

I also have to admit I was ‘stuck’ for a while and that may have just extended and slowed down the game beyond what was intended by the devs. When you first start the game you are limited in what parts of the ocean you can explore. By building upgrades for your ship you can expand your operable area. First thing you need is an ice breaker to get past an ice barrier.

I had everything I needed to build this except a Spirit Flower. I spent several play sessions sailing around the ocean visiting points of interest looking for a Spirit Flower, and had no luck. That was frustrating and felt really tedious.

Simultaneously, my first spirit (Gwen) had gone missing from the boat. I was supposed to locate her. I found her, over and over again, at shops where she’d be buying yarn, but I think this was a bug. Yarn-buying Gwen wasn’t the Gwen I was supposed to find. I was finding “for flavor” Gwen when I need to find “Active NPC” Gwen.

Eventually I got frustrated enough that I turned to Google. Apparently the other spirits on the ship are supposed to give you clues to finding Gwen, but that never happened for me. Luckily once I knew where to find her, I went there, finished her questline, she passed on to the great beyond and suddenly a Spirit Flower appeared in her house. ARGH!

So yeah, I did those two things in the wrong order. Now I know. Now you know. You don’t harvest Spirit Flowers, you get them when spirits leave the ship for good. Also Gwen’s location, in retrospect, was pretty obvious in that we’d been there before, but for me the player that was like in August when I first started playing, and I’d forgotten. So kind of a perfect storm of bad results for me.

Anyway I’m not deleting Spiritfarer or anything like that, but I’ve pretty much determined this can’t be my “main game” but maybe like a “mellow out at the end of the evening” game I pick up now and then. But if you’re looking for a game that is chill and relaxing and quite pretty and often charming, this is a title that tics off all those boxes.