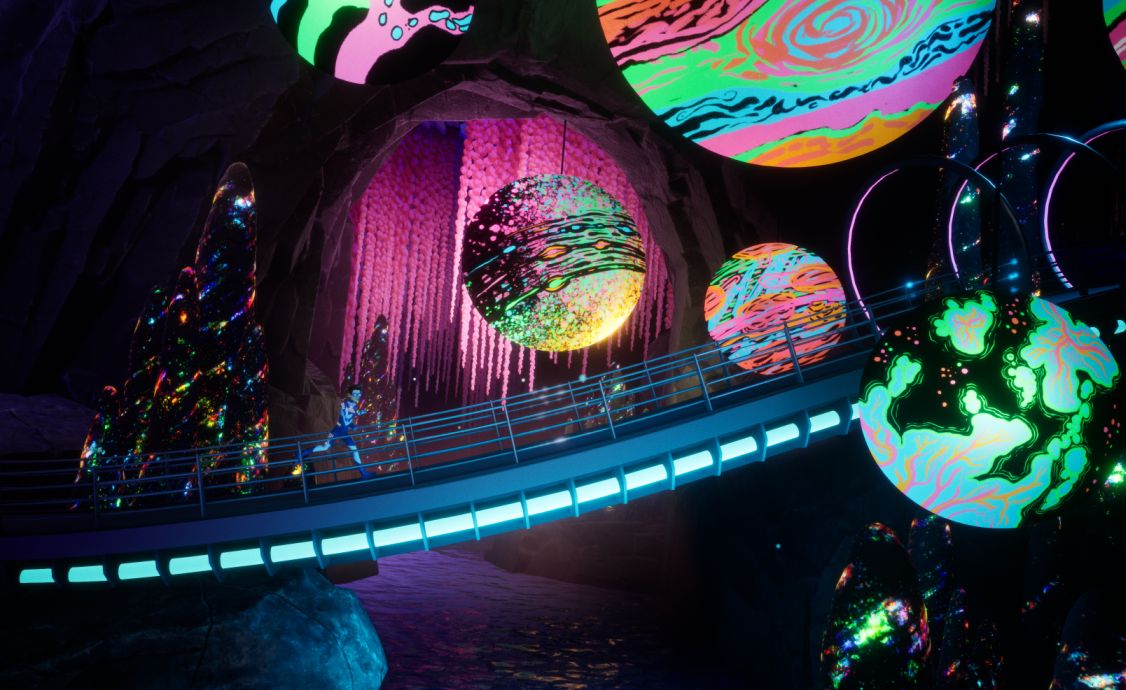 Here’s another title that I decided to try based on the fact that it was leaving Xbox Game Pass soon. The Artful Escape is (kind of) a game where you play as the nephew of a famous folk musician who is, for reasons never really made clear, expected to follow in the footsteps of his uncle. And while he is a capable folk musician, in his heart there dwells a shrieking electric guitar rocker.

When a mysterious woman hears him shredding, she gives him a nudge that leads him on a psychedelic trip of self-discovery.

So a few important facts. First, The Artful Escape is very short. Four or five hours long, and it has no more ‘replay value’ than a book or a movie. In other words, the only reason to play a second time is if you want to experience the story again. I played for a few hours this morning, broke for lunch and to do a few errands, then finished this afternoon AND I got all the Achievements. Too bad Xbox doesn’t have Platinum Trophies.

Second, it is barely a game. You move along a prescribed path with some very very light platforming (sometimes you have to double jump!) and there are sections where you have to play a Simon-like copy-cat “press the buttons in the order I pressed them” mini-game. These segments eventually get a little challenging as things speed up but I felt like the developers made this all fairly forgiving. I’m pretty sure a few times it let me “pass” the challenge after like 3 fails even though I didn’t nail it perfectly.

But there is really no exploring or puzzle-solving or anything like that. You have some multiple choice options here and there but they seem to be only for ‘flavor.’

Here’s a random 60 seconds of gameplay to give you an idea of what the experience looks and sounds like:

So yeah, basically it’s an interactive story, but a pretty entertaining one. You really need to enjoy jamming electric guitars though, as this kind of music plays a HUGE role in the game. Also I’d suggest playing with headphones and the volume cranked up.

Oh, and probably worth noting the voice talent is quite good, with some names most of us would recognize (Carl Weathers and Lena Headey).

The first 20 minutes or so, while you’re still in your sleepy little home town, are kind of sleepy periods of the game but things pick up after that. In the middle I started to get a little bored. When I stopped for lunch I was almost thinking “OK I’ve seen enough of this.” but after a break I came back and soon it was clear that the story was starting to move towards a culmination which convinced me to stick around and I’m glad I did.

So yeah, if you don’t mind the length (and I’m glad it wasn’t any longer), I’d probably recommend this one. Pay for it like you would a movie or something. Whatever you feel comfortable spending on a movie, spend on this game. If I had to put a price on it I’d say like $10. Probably you will spend your 4-5 hours on it then never play it again.

I have to say it felt kind of awesome starting and finishing a game on the same day. I wish there were more quality short games like this one! Also Bhagpuss, if you’re reading this, I kept thinking of you and your music posts while I was playing. I’d be really interested to hear what you thought of The Artful Escape!

2 thoughts on “The Artful Escape”