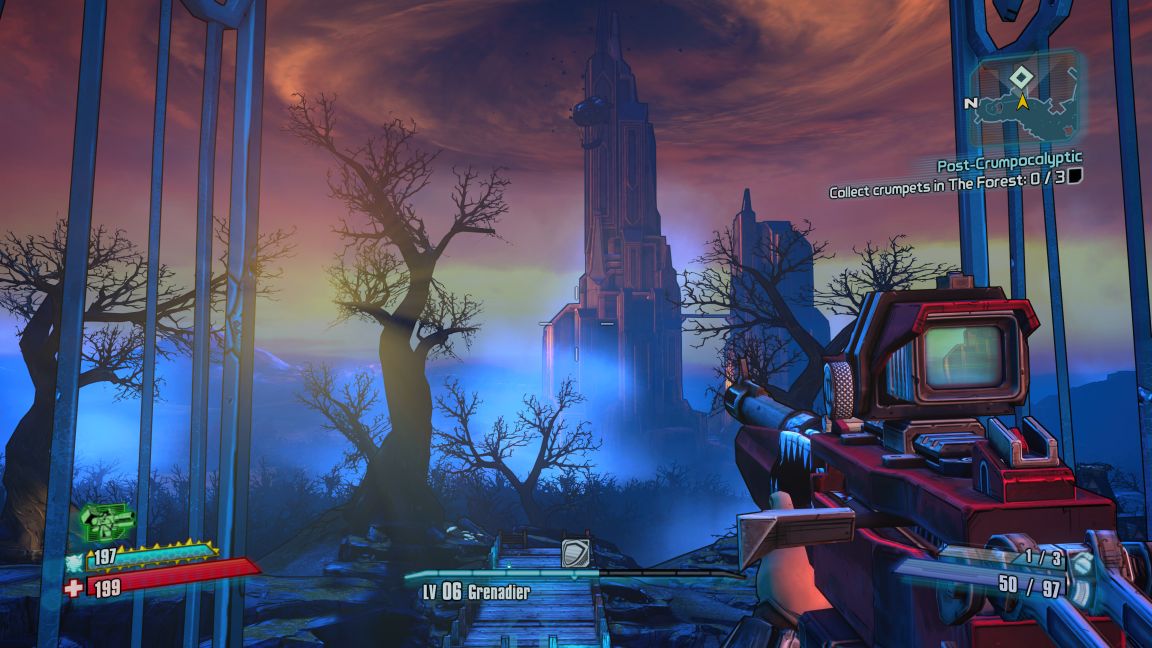 A new month means new freebies from Sony for Playstation Plus members. One of the titles this month is Tiny Tina’s Assault on Dragon Keep, a spin-off of the Borderlands series.

Now I haven’t really played much Borderlands and don’t really follow it, so hopefully I’ll get this right. Assault on Dragon Keep first released as DLC for Borderlands 2, and Google says it came out in June of 2013. I guess it must have been popular because next month a full stand alone game, Tiny Tina’s Wonderlands, launches. The game I’m playing now is the Borderlands 2 DLC re-packaged as a stand-alone game, I presume for the purposes of getting folks hyped for Wonderlands.

I know that’s why I played it. As someone who has always bounced off Borderlands but was intrigued by the trailers for Wonderlands, I wanted to play Assault just to see how different the game felt. I’m not sure I know yet, but there’s plenty of time.

The basic premise of the game is that Tiny Tina (who presents as a young girl but I am otherwise not familiar with the character) is running an RPG for some of her vault hunter friends. There’s Lilith, who I’m somewhat familiar with, and a bunch of others who I dunno who they are. Gameplay takes place in the RPG and the mechanics are (at least to a casual observer) very similar to Borderlands, aka it’s a first person shooter. While you play you hear voice-overs from the vault hunters who are playing the game within the game. (Still following me?). The conversations tend to be pretty amusing, at least to me.

Lilith wants to play the game kind of seriously while some of the others just want maximum mayhem. Tina tries to keep everyone happy, sometimes re-writing the world on the fly. For example her environment will be full of flowers and someone will comment about how that isn’t scary. Tina will say “You’re right!” and suddenly the flowers go poof and the world is dark and foreboding.

So let’s talk about why I bounce off Borderlands. I have two main issues. First is the humor. It is very “Jackass” in tone, and that’s just not my bag. I remember a lot of jokes about murder and torture, or bodily functions. (Yes, there are some of us out here who don’t giggle at poop and fart jokes.) There are suicidal midgets and things like that. There’s Claptrap who, OMG that character is so annoying I’m getting mad just thinking about it. Overall the ‘tone’ of Borderlands just rubbed me the wrong way (at least what I’ve seen of it, which isn’t very much.)

Second is the loot. There is so much loot. A constant shower of loot. I find it super-fatiguing. I get that the idea is you just kind of skim the loot and ignore it if it isn’t rare or better, but I am just too methodical for that. I have to open every chest, break every container, and check the contents of each one. And when my inventory gets full I have to go back to town to sell. The idea of just LEAVING LOOT ON THE GROUND is abhorrent to me. This results in a LOT of running back and forth and examining trash loot and my pace being super slow.

My first reaction to Assault on Dragon Keep was, “Yup, this is Borderlands.” Heck I filmed it:

Kill 1 skeleton, spend a few minutes opening chests. It was a drag.

I pushed on, though, and at one point I revisited an area I’d already been to and… the chests had all respawned. That was the straw that broke the back of my old habits, and after that I started ignoring about 75% of the chests I saw. Once I did that I started having a lot more fun.

The world of Dragon Keep is filled with Borderlands characters who don’t seem as distasteful as I remember them being. In fact I found them pretty fun. There’s a dude who is a real jock and no one wants to let him play because he’s not a ‘real nerd’ and they make him answer geeky questions to prove he should be allowed to play. Out of this comes a cautionary tale about gatekeeping where Lilith, who has been most opposed to letting him play, admits that she feels kind of like a dick for treating him so badly.

I still think there is too much loot, and I find the inventory UI kind of confusing, but I am digging the vibe. I’ve laughed a few times, and so has @partpurple. (I think it’s a good sign when a person not playing the game gets drawn in enough to laugh at jokes or have any other reaction to what’s going on in the game world.) I’m hoping the full game will be modernized a bit, but if they bring the same tone along, I’ll be interested in playing. It’s also worth mentioning that I am REALLY enjoying the music (which sounds fitting for a high-fantasy game, but really seems delightfully odd when you’re mowing enemies down with a shotgun).

Of course now Dying Light 2 is out so I’ll be transitioning to that, but I’m glad I tried out Assault on Dragon Keep and I’ll be keeping it on the hard drive. Heck it has me thinking that maybe I need to give the main Borderlands games another go.