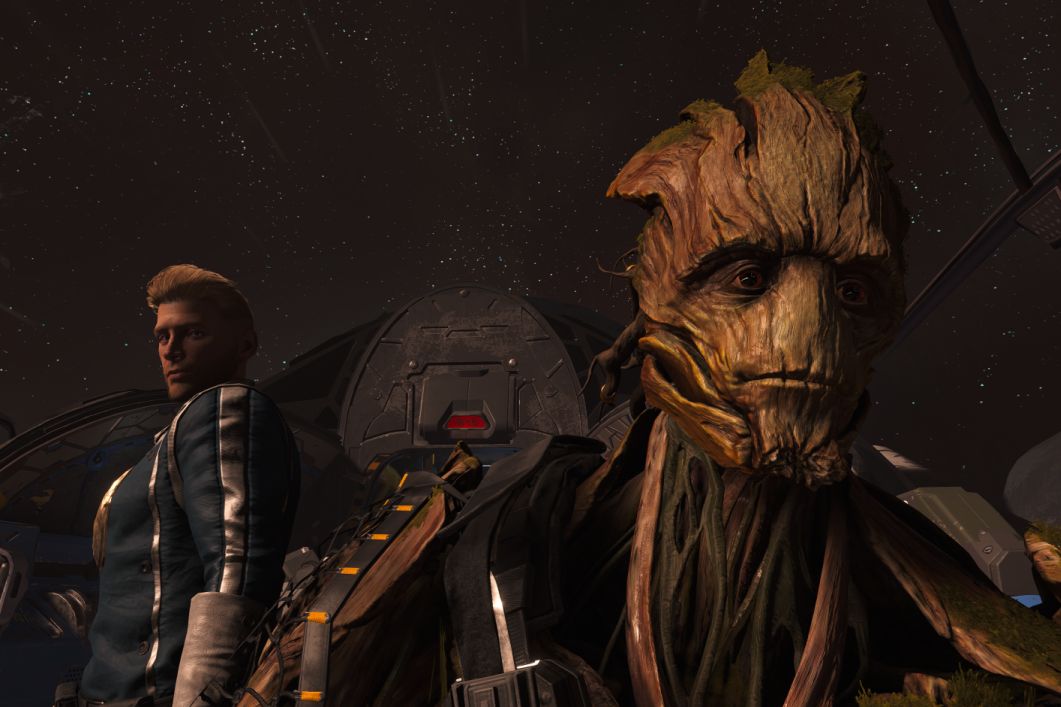 I finished Guardians of the Galaxy late last night. Too late, honestly. By the time I was done I had a headache and my eyes were protesting about too much screen time.

I finished late because GotG is one of those games that seems like it is going to end well before it actually ends. I spent all of Sunday thinking “OK we’re about at the end” but nope. One of the few things I dislike about games is the uncertainty of their length; this is a problem (more or less) unique to gaming. If you’re reading a book you can look and see how many pages are left. Even if you do ebooks, you get a page number and/or a percentage finished. Heck my Kindle even estimates how much time you’ll spend reading what is left. With movies…, well first movies are generally a certain length. I suppose you would be surprised if you went to a cinema and a movie turned out to be 5 hours long, but such things are so unusual that something as simple as a glance at show times would tell you that this movie was a special case. At home, just hit Pause and you know exactly how much time you need to finish.

But not games. If you start a game that you know absolutely nothing about, you don’t know if it’s going to take you 3 hours or 100 hours to play through it. It makes it hard to budget time for particular games. The Internet can aid you (or, I guess, friends if you have any of those). I often visit HowLongToBeat before I start a game. That gives you a ballpark at least.

HowLongToBeat told me Guardians of the Galaxy should take anywhere from 17-23.5 hours to complete. However I am terrible at mentally tracking how much time I spend on something and GotG doesn’t have an “hours played” feature that I’ve noticed. Ergo I had more than enough game to last me another two days but thought I was almost finished so played past my session comfort zone, if that makes any sense. I finally finished around midnight.

I have three opinions about Guardians of the Galaxy:

Opinion 1: I didn’t really like the combat very much. I never felt like I got good at it or like I was in control. I muddled through and fights got easier over time but it all felt pretty random. You directly control Peter Quill aka Star Lord. His basic guns are like pea shooters that don’t seem to do much damage, and he can die if a baddie looks at him wrong. You control the other team members by holding down the L1 button, then selecting one of the face buttons to pick the team member, then selecting one of the face buttons again to pick the skill you want them to use. All the while enemies are bashing your face in which led me to generally just spam random skills in the hopes of taking down a bad guy. Usually by the time you get that skill selected your “target” has jumped from the baddie you WANT your teammate to attack to some rando cannon fodder. (I had a terrible time with losing my target lock.)

I don’t want to drone on about the combat too much. I mean I finished the game on the normal difficulty setting so it can’t be THAT bad, but it was the aspect of the game I liked the least.

Opinion 2: The exploration/travel parts of the game were decent. This isn’t an open world; instead you’re traveling down a fixed path with lots of side-corridors filled with loot (when I say loot I mean cosmetics or the ‘currency’ you use to purchase upgrades). You will frequently encounter some kind of obstacle which serves as a mini-puzzle. These often are solved with the help of the other Guardians: at various times you’ll be bashing through obstacles, crossing chasms, climbing over walls, or squirming through holes. Each Guardian has a number of ways to accomplish these tasks but each puzzle only has one solution. None of them are very hard but they added interest and felt satisfying.

Opinion 3: The story and characters were amazing. The story itself was easily good enough and complex enough to base a movie on. It had its funny parts and its sad parts and its heartwarming parts. The story alone was worth the cost of entry. Then, this being Guardians of the Galaxy, there was all the banter and interpersonal goings on which were very much on-brand and very well executed. The actors were all top notch. I particularly enjoyed Jason Cavalier as Drax, Kimberly-Sue Murray as Gamora and (though a secondary character), Emmanuelle Lussier Martinez as Mantis. In fact I kind of felt like Mantis stole the show every time she turned up. She was wonderful.

Also, meaning no disrespect to the Troy Bakers and Laura Baileys out there (love ’em both), it was nice to play a game voiced by actors you haven’t heard as characters in half a dozen other games in the past year.

So, credits roll and what’s next? While there is a New Game+ I unlocked all the abilities the first time through. I did miss some cosmetics but if I really wanted to hunt for those I could just reload chapters; I’m not sure they’re that important to me though. I could replay it just to see what happens if I make different decisions along the way, and I may do that sometime in the future, but for now I think I’m done. I would be really happy to hear about a story-based DLC or a sequel, though.

4 thoughts on “Finished Guardians of the Galaxy”