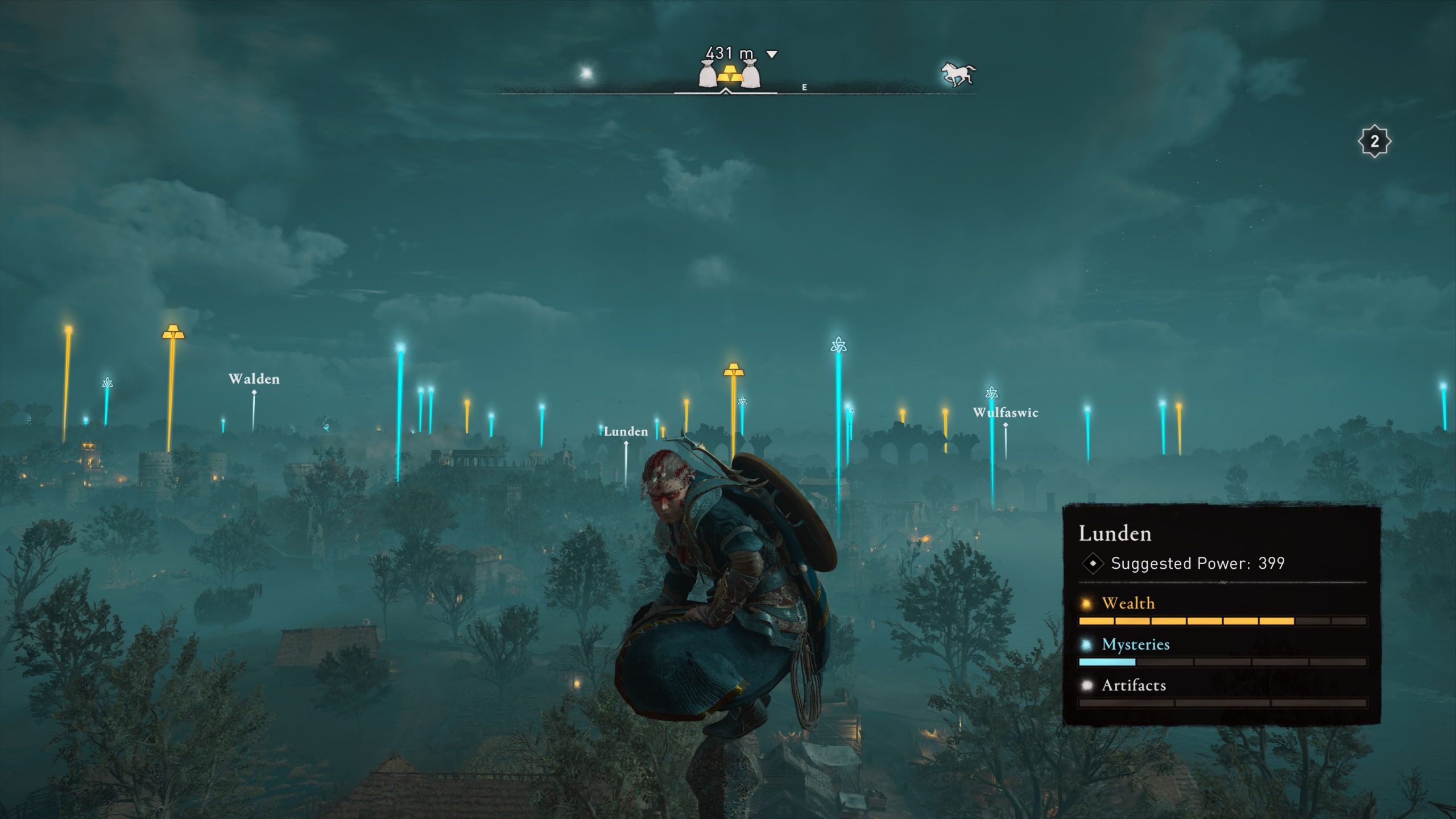 This post is a few years too late, really. There was a time not so long ago when gamers as a hive-mind (in other words, some subset of gamers who managed to make enough noise to be noticed) were really down on open world games, and specifically Ubisoft open world games.

I wasn’t one of those gamers; I love a giant open world to roam around in.

Back in the dim days of the 1990s I used to play MMOs with a group of friends. We’d have terrific adventures exploring new worlds. OK mostly one new world: Britannia. Ultima Online was the big news back then. (My first actual “MMO” was MegaWars III on Compuserve, but Ultima Online felt like a breakthrough.)

Over time, friends drifted away and I forgot to make new ones. I kept playing MMOs but mostly by myself. I was still drawn to exploring and seeing what I’d find over the next mountain. Eventually though, I started getting frustrated at not being able to see all the content in instances and other groups-required places. Yadda yadda yadda/whine whine whine.

Then I just pretty much stopped playing PC games and moved over to consoles and that more or less put an end to my MMO days. (I mean, I still dabble here and there but never anything serious.) Why I switched to consoles is maybe good post fodder for later in the month.

Anyway enter big-ass open world games. Once again I had a world to explore, only now I could see it all if I wanted to. I was pretty happy about that. Granted eventually I’d see everything and unlike MMOs, open world games don’t get long term support. A year or two of DLC/expansions is about the best you can hope for. [This would be a good time for a PC gamer to point at all the mods available for Skyrim that continue to expand that game years and years after release.]

Hey, we play the hand we’re dealt. Anyway, I just wanted to share my love of one of my favorite types of games, and maybe convince someone to give one a try.

To that end, here’re a few tips to help you appreciate open world games as much as I do.

1) Pick one that has a protagonist that you enjoy. I’m speaking specifically of their personality and how they react to others. One of my favorite protagonists in recent years has been Kassandra in Assassin’s Creed Odyssey. I spent over 200 hours in her company and was bummed when we finally hit the point where we’d done pretty much everything. If the character you’re playing as doesn’t bring you joy, you probably won’t last very long in an open world game.

2) If you start to get bored, let go of your inner completionist. Don’t fixate on clearing every point of interest on the map. Do enough stuff to keep you comfortably leveled and focus on the story. Alternately, do the content (most of these games have a variety of ‘quest types’) that you enjoy and skip the stuff that doesn’t interest you. Virtually every open world game gives you the opportunity to continue playing past the ending credits and if you get to the end and want more, that’s the time to go map clearing. (The image at the top of this posts shows the POIs in just a small area of AC Valhalla and it was taken 140 hours into the game & well past when the credits rolled.)

3) Take breaks. These are generally long games, some of them with 100+ hours of content. I find taking breaks to play other, shorter games helps to keep the open world title feeling fresh and full of wonder.

4) Tweak the difficulty as you play. If the game is too easy you’ll get bored, and if it is too hard you’ll probably get fatigued. A lot of these games seem to get easier the farther in you get (you unlock new skills, better weapons and get too strong for the content). If that happens bump up the difficulty. Conversely of course, if you’re finding it exhausting to constantly struggle with encounters, lower the difficulty down.

5) Immerse yourself. This one is hard to explain but I find that these games are most fun if I try to forget they’re a game. I do that mental role-play thing where I just try to become the character. When I’m REALLY into a game I may stop availing myself of quality-of-life features like fast travel. Instead I enjoy traversing the world and taking in the sites.

I realize none of these tips are revelatory but who knows, they may help someone. The biggest complaint I hear is that there are just too many points of interest on the map and things get overwhelming and tedious. I used to try to complete them all too. Letting go of that was hard for me, but doing so made the games so much more enjoyable.

13 thoughts on “In Praise of Vast Open World Games”