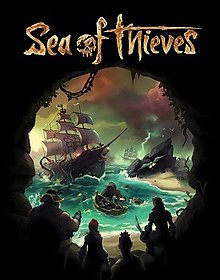 The recent Sea of Thieves beta seems to have been well-received by most. I least that’s the vibe I’m getting… I don’t have detailed analytics or anything. Now I’m curious to see how it does at launch. Why? Because I think at least some people approach beta tests differently than they approach launched games. Before I go too much further into that, let’s back up a little.

The best analog I can think of in terms of other games is the Dark Zone in the Division. There too you can do quests to get stuff that you then have to get to safety and another player can kill you and take that stuff.

I may be remembering incorrectly (and someone will correct me if I am) but I think the Dark Zone was seen as kind of fun in the beta, but most of the people I know avoided it after launch.

Why? Because when you’re playing a beta you know your progress is going to get wiped so you’re not that invested in the development of your character. You found a great item and got ganked and it was stolen? Well it would’ve gone away at the end of beta anyway. But once you hit launch, you get more invested in things and now losing progression hurts more. At least, that’s my working theory.

In The Divsion, most people I know just avoided the Dark Zone and there was still plenty to do in the game. In Sea of Thieves, everything is the Dark Zone. This is why I’m curious about how people will feel about the gameplay after launch.

On the other hand, there’s a big difference between Sea of Thieves and The Division. The Division is an RPG and stats are everything, and the stuff you were losing to other players in the Dark Zone might have had a significant impact on the strength of your character had you managed to extract it. In Sea of Thieves, chests (at least in the beta) are just a token to be turned in for currency/reputation. That might be enough to keep players from rage quitting when they lose a chest to another player. There was nothing super unique about that chest, after all.

On the other-other hand, if chests aren’t rewarding enough, will everyone just be attacking each other since that’s more fun/rewarding than actually going through the bother of finding and digging up a chest? If everyone is pirating and no one is treasure hunting…well that just becomes a treadmill too. Someone needs to be digging up those chests!

So I think they need to balance things REALLY carefully. Make chests rewarding enough that players bother going after then, but not so rewarding that the average player gets genuinely upset if they get stolen.

It’s still not clear to me what progression in Sea of Thieves looks like. Clearly there are plenty of PvP-only games that are super popular (COD, Overwatch, League of Legends) but I’m just not sure if any of them have the direct exchange of “You work for something, then I kill you and take that thing away from you.” I mean, that sounds really fun for the pirates, and of course plenty of pirates will mix up treasure hunting and pirating, and that might be enough audience to sustain them. I just don’t see a place for people who strictly enjoy the puzzle aspects of figuring out the clues that lead you to the buried treasure, but not every game has to be for everyone.

Sea of Thieves is a free-for-all world and that’s a bold move for Rare. I hope it works out for them. The good news is since the game will be in Game Pass at launch, a $10 1-month subscription will let us all give it a go. Or if you’ve never been in Game Pass you can get a 14-day trial and play it for free. If I had to plunk down $60 for Sea of Thieves I don’t think I’d do it; I’m not social enough and I’m the kind of gamer who’ll get annoyed when the same crew kills me for the 3rd time in an evening. But for $10 I’ll probably at least TRY it. Maybe they’ve thought about all this and have a system built that allows for different kinds of play styles, or maybe they really don’t care of it isn’t fun for people who don’t want to join a full crew.

I’m writing this post because right now Sea of Thieves is the current ‘darling’ of the game journalists and their followers and no one is saying a thing bad about it. I just wonder how big the audience for this type of experience is. The first time you join a crew it’s going to be fun, but what happens if you’re the guy who is always in the chart room shouting directions to the pilot? How long will that be fun for? Or how about being in the crow’s nest keeping a lookout? That’s going to get tedious after a while, I think. But again, maybe they’ve thought about this and we just haven’t seen it yet. I hope so.