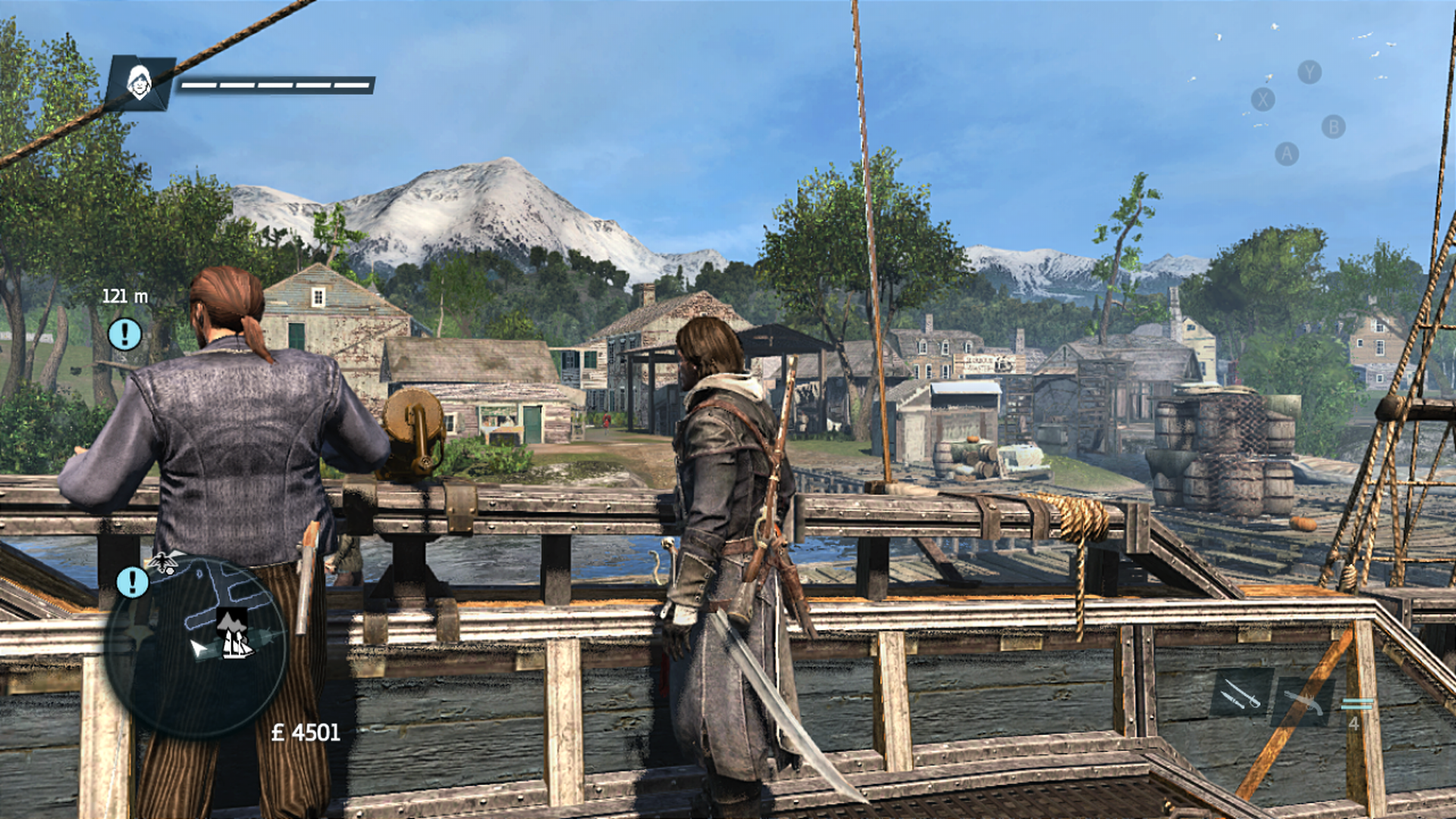 I’ve been awfully negative on the blog lately, so thought I’d better talk about things I AM enjoying, Assassin’s Creed Rogue being one of those things.

But first I have to eat some crow. When Microsoft announced backwards compatibility for the Xbox One I kind of scoffed. Everyone was losing their shit over the ability to play Xbox 360 games on the Xbox One and I didn’t get why it was a big deal. Who wants to play old games when there are so many great new games!?

And now I’m really happy to be playing Assassin’s Creed Rogue via backwards compatibility on the Xbox One. So yeah, I was wrong. BC is a great feature. You might not need it often, but when you really want to play an older title it’s a heck of a lot easier than dragging out an old console and hooking it up. It also helps that AC Rogue seems to play flawlessly via BC (when the feature rolled out I tried a few games and they were all glitchy as heck. Not so here.).

So anyway back to the game.

Actually in gameplay terms it is very similar to Black Flag. Once again you spend a lot of time at sea, attacking enemy ships and building up a fleet that you send off to do missions (via a sort of mini-game). The big difference is setting. Rogue takes place during the French and Indian War. Instead of tropical beaches you’ll be dealing with snow and ice.

This time you play as Shay Cormac who, with his brother Liam, start the game as up and comers in the Assassin’s Brotherhood. Then Shay is sent to recover an artifact in Lisbon, but it turns out to be some kind of trap. When Shay picks up the artifact it causes the Great Lisbon Earthquake, an actual historical event. In real life the Lisbon earthquake, according to Wikipedia, killed anywhere from 10,000 to 100,000 people. The entire city is destroyed.

Shay is horrified by what he has done, but the Brotherhood’s leadership is undaunted and plans to continue trying to collect artifacts. This causes Shay to turn his back on the assassins, resulting in a battle that leaves him near death, only to be rescued by the Templars (of course!). So Shay becomes a templar operating under Haytham Kenway, son of Edward Kenway from AC: Black Flag and the character you play as at the start of AC3. I love how these games intertwine! As is typical of the series Shay winds up rubbing shoulders with historical figures like James Cook, George Monro and Benjamin Franklin.

There are two ocean areas in the game. One is the frigid North Atlantic which feels like Black Flag’s ocean area (aside from the icebergs). The other is the river valley which is a series of much narrower passages that make sea battles a lot more hectic as it’s easy to find yourself running out of room to maneuver in the narrow waters.

When you’re not at sea or at one of the smaller outposts that you can dock at and explore, you’ll be in New York City, helping the Templars chase off the Assassins and taking over the city, district by district. As you do so you can spend money and resources to renovate buildings which, besides making you a good guy (the buildings all tend to be public works) increases your income.

Basically everything you could want from an AC game is here. If you enjoyed Black Flag and didn’t play Rogue, you need to remedy that. I will admit there’s not a whole lot new in terms of game systems. You are hunted by assassins…you have to use eagle vision to find them before they find you when one is near. That’s new. Also there are firecracker darts (used to spook said assassins) and grenades that I believe are new in this one. Maybe I just didn’t use them in Black Flag. Honestly the games are starting to run together in my head these days.

Outside the Animus you’re as Abstergo Entertainment, same as with Black Flag. Your ‘handler’ there only refers to you as “numb skull” so I’m not sure you you’re playing as in ‘real life.’ When not in the animus you can roam around and hack computers via a neat mini-game and get caught up on the back story of who is doing what and why.

I’m still not finished. My save says I’m like 43% ‘synced’ but the sync level doesn’t really indicate how far into the story I am. I think I’m getting close to the end because missions are sending me to areas labeled as “hard.” My ship, the Morrigan, is pretty beefed up and I have nearly the best swords and pistols money can buy. At 17 hours in I feel like I’m nearing the end.

Just in time to play Assassin’s Creed: Freedom Cry on PS4 when it becomes free via Playstation Plus in August. You play as Adéwalé in that one. He was a ‘good guy’ in AC Black Flag and is a ‘bad guy’ in Rogue (it all depends on what side you’re on, doesn’t it?) so it’ll be fun playing AS him in Freedom Cry.

One thought on “More on Assassin’s Creed Rogue”