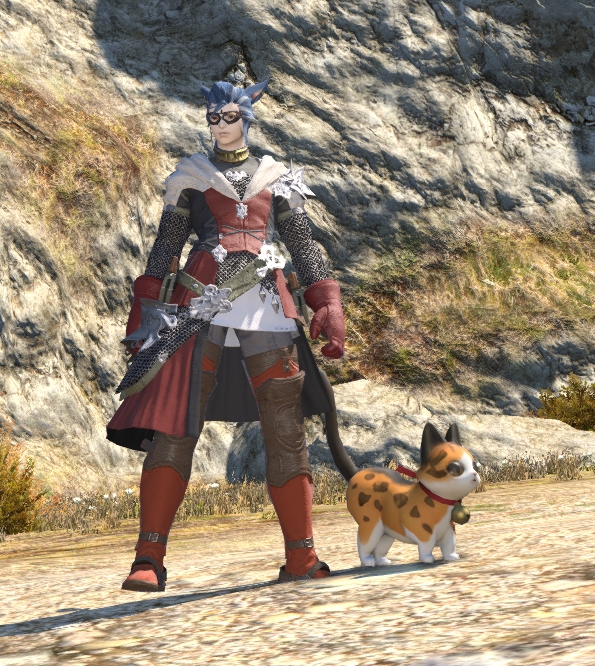 Through an unexpected sequence of events I won’t recount here, I’m back playing Final Fantasy XIV.

I have the weirdest history with FFXIV which I also won’t recount, but for all intents and purposes I went back to the game as a total noob. Couldn’t remember how to play so I rolled a new character and I’m playing exclusively on the PS4 (so far at least).

FFXIV has always indicated noobs (they use the more polite term Novice) by putting a little seedling icon next to the player name. You’re considered a novice for 168 hours (14 days) or until you hit some point in the story that I’ve already forgotten. I ~think~ it is the end of the main story questline from the original game at launch.

In addition to Novices, there are Mentors. Mentors are players who have offered to help Novices, but there are guidelines for who can become a Mentor. You have to have accomplished certain achievements in game and there are different types of Mentors (Trade Mentor, PvE Mentor, PvP Mentor or just plain Mentor). Here’s a list of Mentor requirements.

When a Mentor and a Novice group up, they both get a 20% experience bonus (up to level 20), so there’s an incentive for the two groups to interact.

Additionally there’s a persistent chat channel called the Novice Network. It’s only open to Novice players and Mentors. It’s supposed to be a channel for getting questions answered. The only flaw in the system I’ve seen so far is that a Novice has to be invited into the channel by a Mentor. My new character was level 20 or so by the time he’d encountered a Mentor to invite him in. I’m surprised Novices aren’t auto-joined to the channel.

There’s a new (to me anyway) NPC in the starting hubs called a Smith and they’ll tell you all about Novices and Mentors. At level 15 they’ll also direct you to the Hall of the Novice. This is essentially a series of solo mini-dungeons that teaches you how to play an MMO as your class. I’m an Archer so I got sent through the DPS series of tasks. The Hall taught me to avoid telegraphed attacks, taught me to attack the mob the (NPC) tank was tanking, taught me to pull adds off the healer, and so forth. I knew all this stuff but I imagine if this had been my first MMO rodeo the Hall would’ve been a great learning tool, plus you get some new gear for going through the mini-dungeons (you can do them all in maybe 30 minutes, tops).

If you don’t choose to do the Hall of the Novice at 15, you’ll get sent there before Sastasha, the first dungeon that you unlock. Since I’d already done the Hall, I’m not sure if doing it is mandatory before Sastasha or if it is just recommended.

In addition to being a Novice, you may be a Returner. A Returner is someone who has returned to the game. In order to qualify you have to have one class to at least level 50 and have been gone from the game for 45 days. Returners get the same bonus exp and access to the Novice network. They have a little flower next to their name.

I don’t usually interact with other players in MMOs (ironic, I know) but when I was randomly invited into the Novice Network I accepted. It’s a pretty active channel and at least for the short time I’ve been in it, quite civil. It’s definitely kind of chatty…I saw a long discussion about Pokemon games taking place in it. But when I did ask a question or two I always got an answer, and often several.

This experience drew me out of my shell a bit, and by Sunday afternoon I’d dug out a bluetooth keyboard so I could talk in the Novice Network more easily (typing with the controller isn’t ideal). I saw that there’s a linkshell that extends the Novice Network; I guess folks were making friends in the NN and then getting kicked out thanks to no longer being a novice, and so they created a player-run version to keep in touch.

I played a ton of FF XIV over the weekend and had 1 bad experience (playing a female character and having some creep sending my tells about how sexy I was) but other than that, my experience with the player base was very positive. I ran 3 dungeons, they all did not go perfectly, but no one was giving anyone grief about it.

Overall the way FF XIV welcomed me as a player kind of re-kindled my love of MMOs.