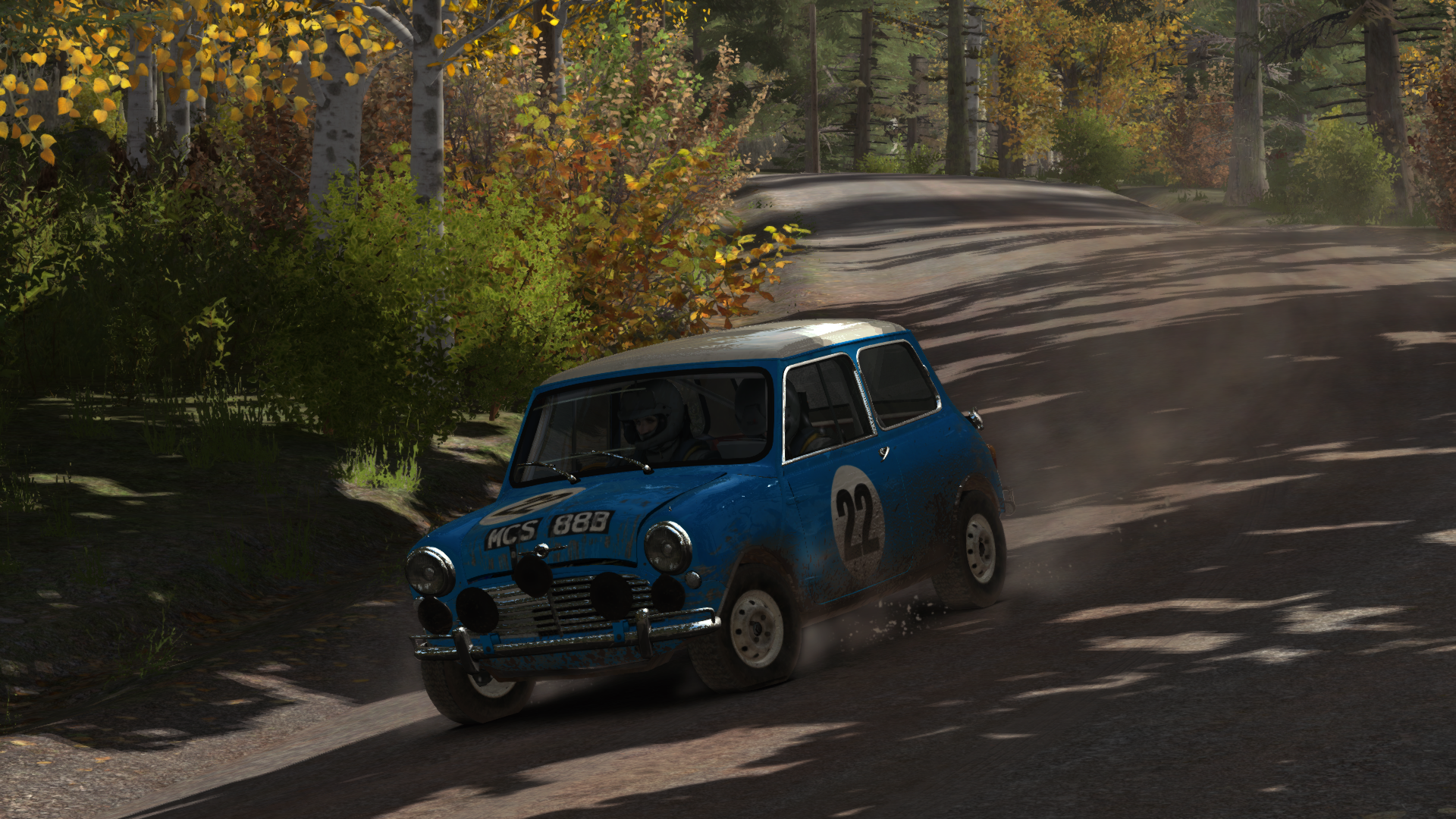 I’ve been interested in Dirt Rally for a while now but always avoided it because I kept hearing about how difficult it was. One reviewer called it “the Dark Souls of racing games.” I know myself well enough to admit that I’d probably never get good enough at Dirt Rally to enjoy it. I’m just too much of a game grazer.

Then the stars aligned. I watched the Indy 500 on TV Sunday and that put me in the mood for a driving game. I fired up Drive Club but I have never been able to get the hang of that game for some reason. Then I noticed Dirt Rally was on sale for $20 including all the DLC so I said what the heck and bought it.

My first surprise is that the cars on-offer go back as far as the 1960s and the first car you get is a Mini from that era. It’s not very fast, which means it’s pretty easy to drive. I left the transmission set to auto and I’ve been playing from outside the car and I’m finding driving this thing is pretty manageable.

The second surprise was how fun the ‘meta game’ is. I jumped right into the Career mode. They start you off with a free car and a small wad of cash and send you off to an event. Each event (so far anyway) is comprised of 4 rally races. Damage to your car accumulates over time. Between race 2 & 3 you get a chance to make repairs but there’s a limited amount of time so you need to prioritize what needs attention most.

At the end of the event you get prize winnings based on how well you did, but you also have repair costs deducted.

I love this system because it means during each race you have to balance the desire to place well with awareness of how much damage you’re doing to the car. In fact if you wreck badly enough you’ll be out of both the race and the event, and you’ll probably lose money on that event. You need to play smart. For example in one event I was doing pretty well then had a bad wreck in race three. The car was still driveable but from there on out I was more concerned with not having it break down than I was in coming in first, so I had to nurse it through the remainder of race 3 and through race 4, since I knew coming in farther back in the standings was a lot better than not finishing due to car failure.

Another aspect of the meta game is hiring team engineers. You pick from a list of engineers that are rated for different systems of the car. Better engineers expect to be paid more. The overall rating of your team impacts how many repairs can get done during an event. If all your engineers are experts in suspension it’ll take very little time to get the suspension repaired, for example.

So, I’m having fun so far. I don’t expect I’ll ever work my way up to the super rally cars since I probably won’t have the skill to control them, but for $20 I don’t mind if I only access half the game, if that makes sense.

There’s a lot more to the package, including Hill Climbing, Rally Cross and of course there’s an online component. But for now I’m practicing in my Mini and trying to get used to driving according to the instructions of my co-driver. I usually crash when I stop paying attention to him. Sometimes his instructions become white noise in my brain since there are so many and I don’t understand them all. But I’m learning! And having fun, and that’s what matters, right?