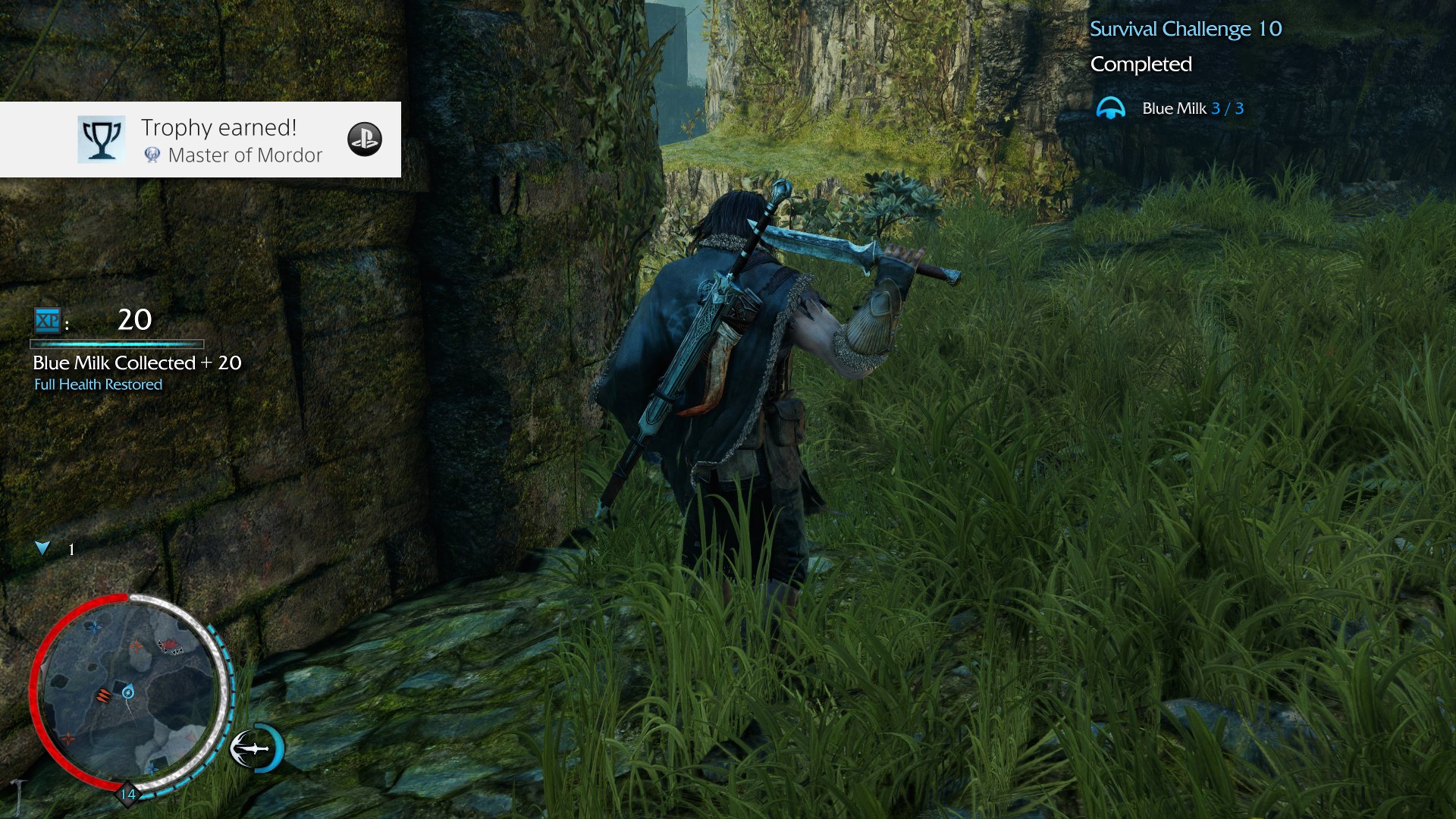 Over the weekend I earned the Platinum Trophy for Middle Earth: Shadow of Mordor. For PC and Xbox players, substitute “achievement” for “trophy” and know that the platinum is basically the “You’ve earned all the other trophies” trophy. It’s the same I guess as getting 1000 gamerscore out of an Xbox game.

I’m still not entirely sure I’m cut out for trophy hunting. (This is only my 2nd Platinum, the first was in Infamous: Second Son.)

The good news is that I got a lot more gameplay out of SoM. I was at 25 hours when I finished the story and 45 hours when I got the last trophy, so it almost doubled the time I spent with the game. And it was very satisfying to get that last trophy after all those hours, even though earning each individual trophy wasn’t always fun. I hit frustration levels well beyond what I experienced just playing through the story, but even the frustrating trophies came with a nice shot of dopamine to my brain when I earned them.

For example one trophy required you to get a Level 25 Rune. You get runes for killing named orcs. The level of the rune is the level of the orc plus some bonuses, and orcs cap out at level 20. So to get a level 25 rune, you need to kill a level 20 orc, but it needs to be a warchief (one of the top orcs in the hierarchy) because that gives you a 2 point bonus. You need to know that orcs weaknesses which means you’ve had to get Intel on him. 1 point for that. You need to USE one of his weaknesses or strengths (which can be easy or hard depending on what they are) because that’s a 1 point bonus, AND it has to be a revenge kill, meaning that orc has to have killed you already. 1 point for that.

When I went after this trophy, the first problem was there were no level 20 orcs and all the warchiefs were under my control. So I had to kill some of my warchiefs to create an opening. Then I advanced time (I think, I’ve already forgotten some details) to get enemy warchiefs in place. Then I got intel on them to pick one that would be easy to trigger. (Sometimes weaknesses are pretty obscure, sometimes strengths make them hard to fight). OK so now I had a warchief who got enraged by fire and I have a fire arrow skill. But he was level 16 and he hadn’t killed me. So then I fought him but he brought bodyguards and I couldn’t get the warchief to kill me since he was content to let his bodyguards do the work. In trying to let this warchief kill me, a random archer actually got in the killing blow. OK respawn, now isolate and take out the bodyguards. Then go after the warchief, kill all the minions around him and he FINALLY kills me. So now he’s level 17. Go back a few more times letting him kill me over and over to level up to 20. Finally I have a level 20 warchief who I can get revenge on and I know his weaknesses..that’s 24 levels of rune. In the battle I hit him with a fire arrow to enrage him, that makes level 25 and finally I just had to kill him. Trophy unlocked… FINALLY. That was like 90 minutes of game time.

On the one hand, it was really satisfying to finally get it. On the other, playing to lose (so the warchief would kill me) wasn’t as much fun.

I guess I’ll just worry about trophy hunting on games I really enjoy. I loved Shadow of Mordor. I loved the setting, loved the combat, loved little touches like how on a combat finisher the ‘clang’ of swords rang out from the controller speaker. I loved finding artifacts and listening to the “memories” and in general, I just love Middle Earth so the opportunity to spend time there was really appreciated. Even after 45 hours I was still getting a lot of joy out of just hacking and slashing my way through swarms of orcs. Even after Talion was completely leveled up and there was no reason to fight orcs, I’d keep fighting them because it was just so darned fun.

I think that SoM is known for being a pretty easy game to Platinum, which was OK by me. And none of the trophies were based on high levels of player skill. If you could finish the storyline you can do all the trophies. You don’t need to be a gaming god to achieve any of them. And there’s no multiplayer, so that’s a huge deal for me since I don’t do multiplayer any more. Even with all that, the Trophies that required you to manipulate the in-game situation in weird ways (like intentionally letting yourself get killed) were a lot less fun than the trophies that just came with playing the game they way you’d naturally play it.