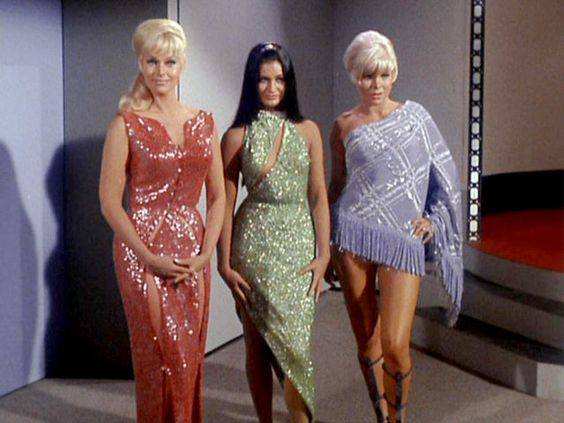 Tonight’s Star Trek episode was Mudd’s Women (Season 1, Episode 6). The first kind of light-hearted episode of the series and maybe the first ever mention of mail-order brides.

I’m sure this episode is horribly offensive by today’s standard (Harcourt Fenton Mudd is selling brides who are secretly made beautiful by an illegal drug) but I think the message pretty much holds up: that ultimately beauty comes from within.

But it’s all wrapped up in 1960s sensibilities. When Evie’s drug wears off and her prospective husband sees that she is “homely” (she’s really not) he wants to call off the deal. Then she takes a dose and gets beautiful again and asks him if he really wants a wife like this one, vain and useless, or a wife who can help him, cook for him, darn his clothes…

For the times I guess that wasn’t outrageous but on a show that features an African American woman in an officer’s role and later showed the first ever interracial kiss on TV it seems a bit old fashioned.

The women, or rather the make-up, fashion and lighting, hold up well though. They were hot in 1966 and they still look hot in 2016. I remember being fascinated by these women but not really understanding why!!! Ah puberty, or more accurately, the years before puberty when everything was really confusing. Mind you I was 6 in 1966 so I guess I’m remembering a re-run a few years later.

Of course it’s not the last time we’ll encounter Harry Mudd (played brilliantly by Roger Carmel who later starred in “The Mothers In Law” alongside Eve Arden and Kaye Ballard. There’s a show you never see syndicated but I seem to recall it was really popular and Arden and Ballard were household names at the time.

Anyway, Harry Mudd is a great rogue… loved that character.

Side note: Tonight I watched on the new magical TV which somehow rendered the show clearer and crisper than I’ve ever seen it. Of course the downside is that you can see how cheap all the props and stuff are.