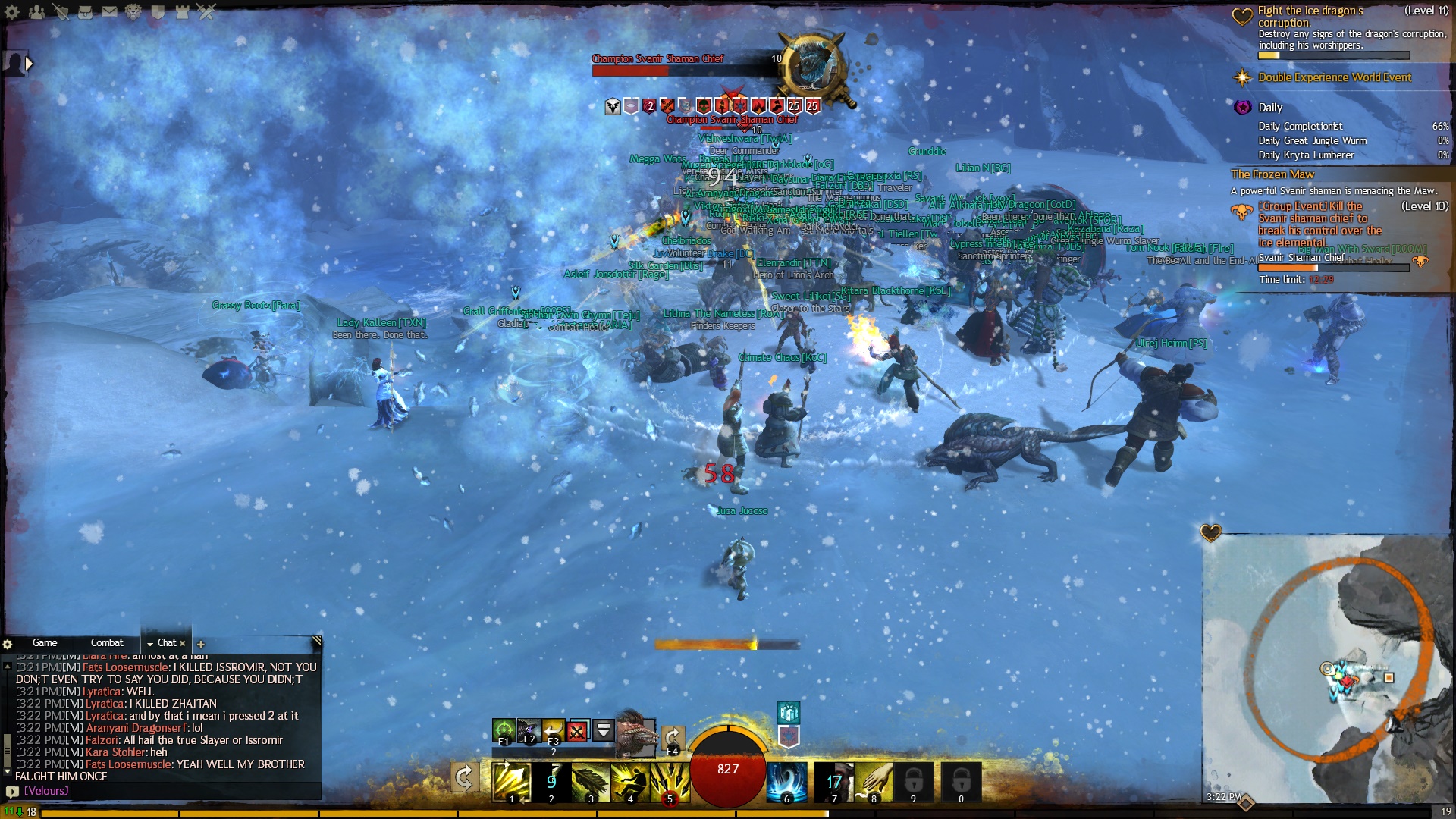 After getting hyped about the Guild Wars 2 expansion (see previous post) I jumped into the game anew. Well almost anew. I had a level 8 ranger that I decided to play.

A LOT has changed since the last time I played Guild Wars 2; many systems seem to be either level-gated or maybe just level-teased. As I gained levels I was told about things like gathering and crafting and vistas…I’m not sure if low level characters now can’t do these things or if this is just kind of a tutorial system. Since my character pre-dated the changes (I’d rolled him years ago) he could do all of them. Daily quests have changed a lot too. They used to be very generic, like harvest 30 items or kill 50 monsters. Now there are a lot more of them to choose from but they’re pretty specific: do event X or gather wood from area Y. This probably helps to ‘funnel’ players into the same place to aid in keeping things populated.

I don’t know if it was the expansion announcement and everyone had the same idea that I did, or if the game is just still doing well, but the world felt very populated to me:

There was also a double exp buff for everyone this weekend and I went from level 8 to level 23 pretty quickly. Yesterday I thought to do an /age check and he was 8 hours old and level 17. This morning at level 23 he’s 11 hours. Six levels in 3 hours seems plenty fast, particularly since his map is still largely unexplored so he’s doing a lot of hoofing it back and forth.

I’m still struggling a little bit with scratching that progression itch since you learn all your skills for a given weapon very early and from then on out it’s about earning and spending skill points for utility spells which still don’t feel super impactful to me, but as I unlocked more of those and got into higher levels and needed to rely on them more, it was all feeling better. So I’m not done with Guild Wars 2 yet. We’ll see how long it sticks this time.

When I wasn’t playing that, I was playing Drive Club on the PS4. If you’re a PS4 owner you know that Drive Club had a horrendous launch, and if you’re waiting on the free PS+ version as far as you’re concerned it’s still having a horrendous launch. I bought the game and found it very pretty but also both frustrating and a little boring at first.

But Evolution Studios has been updating it regularly. They’ve added weather (which looks amazing) and some new tracks, circuits and cars for free. The servers are finally stable so your club and driver’s progress can be saved (and you can play online but honestly I haven’t bothered yet).

The core game, of course, hasn’t changed. It’s still very much a racing game, which to me is a little weird for a game called Drive Club. Prior to launch I assumed there’d be an open world where you and your crew could just kind of go cruising around. But nope, this is track-based gameplay. They still haven’t added any kind of replay mode, which seems odd given how pretty the game is, though they did add a photo mode for stills if you want to stop a race to take some shots.

They say this isn’t a simulation and though I’m not going to argue, it doesn’t feel like an arcade racer either. For one thing, there’s no racing line; you have to learn the tracks (there are green/yellow/red flags on corners to give you hints as to how tough they are). There’s no rewind either (something the Forza series has spoiled me with) so if your concentration lapses 90% of the way through a race and you hit something, you’re probably coming in last.

I had a devil of a time playing this game at first, if I’m to be honest. Eventually in an attempt to ‘find the fun’ I started driving from in-cockpit and using a manual transmission. Somehow the manual transmission flipped a switch in my brain and I stopped mashing down on the accelerator all the time and started driving like a sane person actually drives. I eventually went back to a behind the car camera just to get back some peripheral vision, but I stuck with the standard transmission for now.

And suddenly the game felt fun again. I still suck at it but now I’m getting better. Evolution has tweaked the AI so it no longer gleefully smashes into you quite so often, and between that change and me learning a touch of finesse Drive Club is now a game I’m really enjoying. I need to be in the right mood for it; I have to really concentrate to do well. But if fills a niche on the PS4, at least for now. I got so enthused about it that last night I sprang for the season pass (it’s dangerous having a balance in your PSN wallet…its so easy to spend it).

Of course, me being the knucklehead I am, I have no recent photos or videos from the game. Here’s a clip I recorded back in December (right after weather was put in) when I was still playing with automatic transmission and treating both brake and accelerator as if they were binary switches. You can see how poorly I did, and this is in VW Golf, not some super-car: