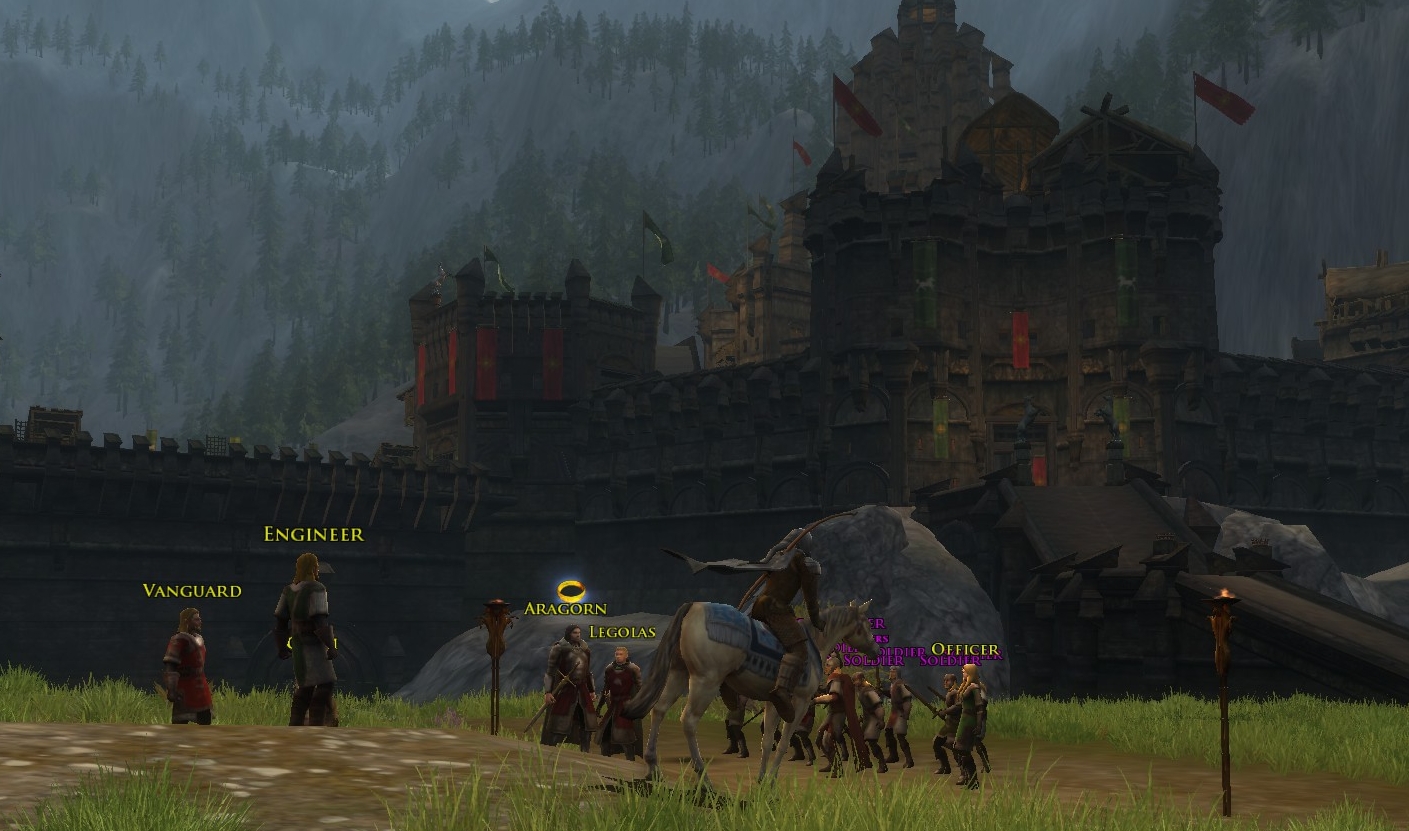 Last week there was a news item hitting the blogs saying LOTRO wouldn’t be getting any more instances or raid content in the near future. That led to some speculation about the future, or lack thereof, of the game. While Turbine’s Rick Heaton was quick to point out that Turbine and Warner Brothers have renewed the license and they have an agreement that runs through 2017, the seed was planted in my brain.

Online games have a lifetime and they’re all going to go away eventually. As a long-time Tolkien fanboy, no MMO world has captivated me like Turbine’s rendition of Middle Earth has. I’m not necessarily a fan of all the game systems, but the environment makes me geek out, so I decided to revisit the game while it and I were both still around.

It’s been a long time since I played LOTRO and much has changed. It went free-to-play of course, and I’m not sure I’ve played it seriously since then. I bought a Lifetime Membership way back in 2007 so I’m a VIP member, which you should keep in mind as you read this post.

I remember feeling like the Turbine Store was being shoved in my face every 5 minutes, so I guess I must’ve played some since the transition. This time around I haven’t felt that the Store was being promoted too heavily; I’m not sure if the game has changed or if I’ve just gotten more used to In-Game Stores.

The first order of business was overcoming the “WTF do all these skills do? What’s all this crap in my inventory?” mountain. Or alternatively, side-step it all by rolling a new character, so that’s what I did.

The very very first tutorial seemed unchanged, but as soon as I got to Archet (I rolled a Man) I started noticing differences. The quest lines seem to have been tweaked/streamlined a bit so there’s less running back and forth, which was a nice discovery.

Also through the magic of the Turbine Store, you can purchase the ability to ride a horse at level 5. You are also given a “Welcome Package” that includes a horse whistle that lasts for some limited time (I think it was a day, real time). I bought the skill and super-sized it so my mounts run a bit faster. While I was shopping I also purchased an account-wide upgrade to 6 inventory bags and some extra shared vault space.

Another interesting change is that you no longer have to loot corpses. All your loot goes into a “Pending Loot” interface where it stays for as long as an hour. At any time you can open this interface and take out any and everything you like. This seems like a small change but in fact it makes a HUGE difference in the pace of playing at low levels. You can move from mob to mob, being a whirling dervish of blades, and never have to pause unless your health or power is low. I LOVE this system! I have no idea how it works in groups though.

Other changes I noticed right away: You no longer have to purchase skills, and in fact the whole skill system has been overhauled. Each class has 3 specialties to choose from. For my Guardian I choose to be a sword and board DPS role. I could’ve also picked a 2-handed weapon wielding role, or a more pure tank role. I *think* you can re-specialize at any time.

There’ve been some small but nice tweaks to combat. You can now turn on features that move your character to the opponent, as well as turning to face him. No longer will your hero swing his axe into thin air and say “Oops, I need to be nearer to and/or facing him.” Your hero is smart enough to turn towards his target and close the range, if needed.

All in all I’m finding the pace of the game is faster and less frustrating than it used to be. I’m enjoying it so far!

Next time: The changes I’ve made to myself to help me enjoy LOTRO

2 thoughts on “Back to LOTRO”