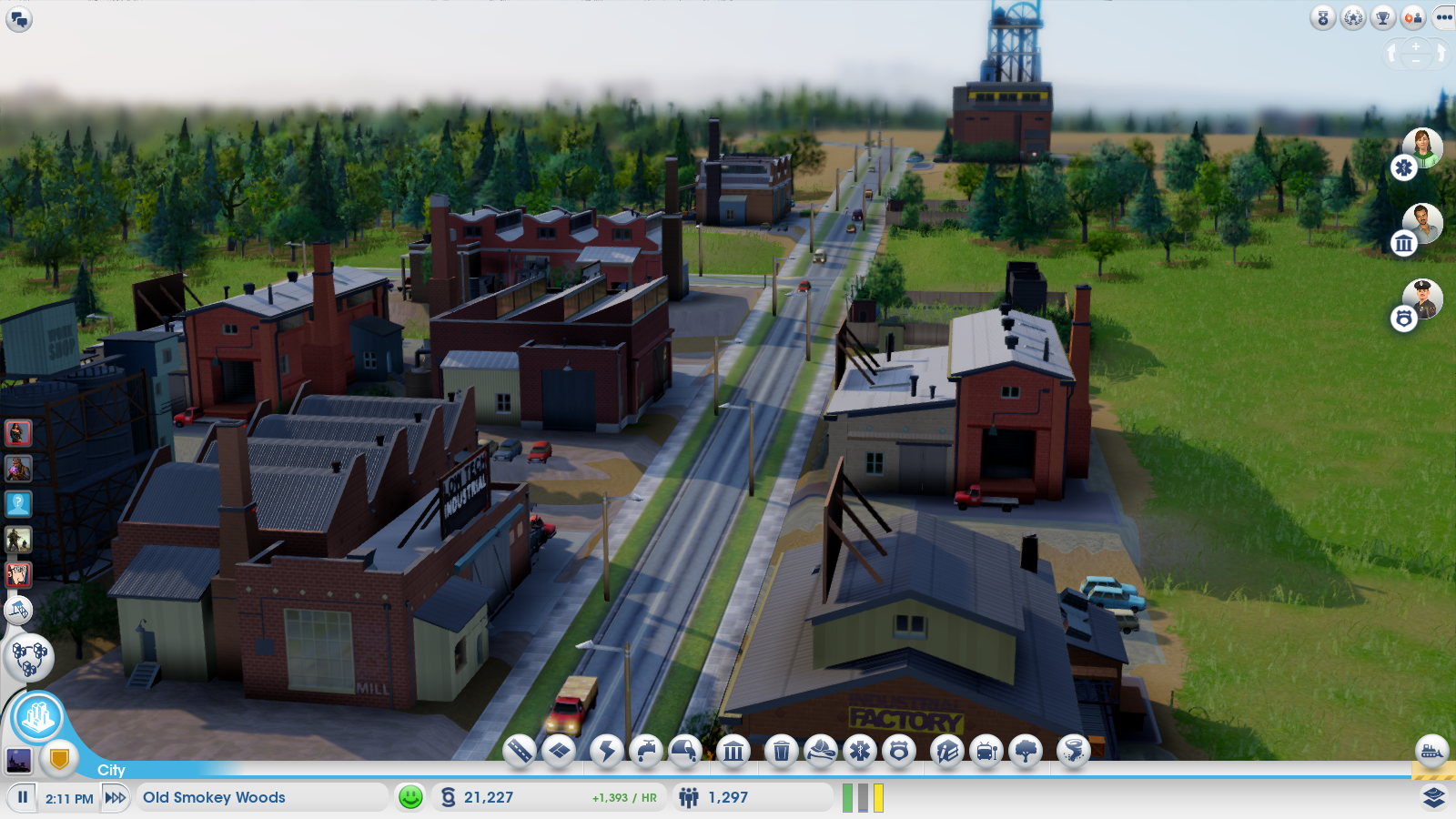 I’ve been waffling back and forth on this post for a couple of days now, because I know it’s going to get me into a pissing contest with someone who disagrees with me and I keep thinking “Do I need this aggravation?” But my sense of injustice is getting to me so here goes…

SimCity had an awful, awful launch. There’s no doubt about that. And the game still has bugs (totally unheard of for a new game, I know), in particular the issues with how traffic flows. I still think EA should have given people refunds when the servers were crushed for the first 4-5 days after launch, but they didn’t. I guess a free game is something but still… I felt a little bit like I was being held hostage when they refused to give refunds, even though I didn’t want one.

But all that was THEN and I’m hear to talk about NOW.

And in the NOW, I’m having a lot of fun playing the new SimCity.

Since the game requires an Internet connection… wait, let me get this off my chest first.

Any comments whining about the always-connected requirement will be immediately deleted — this wasn’t a bait and switch — EA & Maxis were very up front about the game needing an Internet connection. If you don’t like that requirement, then there are lots of other games to play. If you don’t like it and you still bought the game, then you’re a very silly person and I have no sympathy for you. I mean I wasn’t crazy about that aspect of the game but…

Since the game requires an Internet connection I’m playing in a region with friends. In this respect SimCity is like a lot of MMOs — sure you CAN solo but the game is meant to be played with friends and is much more fun that way. In an ideal world you’ll be playing with people that you socialize with outside of the game, so that you can swap stories and ask for favors easily, since this too adds to the fun. When a friend asked me to connect an abandoned city I’d taken over to a railroad spur, it was better than any ‘quest’ the game offers you.

Anyway I’ve been pretty obsessed with SimCity this week. I play it right up until bedtime then I lay awake thinking about what I’ll be doing next. But I don’t mean for this post to be a review…

I mean this post to be a condemnation of the mob mentality of gamers.

Before SimCity launched there were quite a few very positive reviews from various outlets. Once the game launched and the servers crumbled under the weight of the customers, everyone started (rightfully) condemning EA for not having been better prepared. But now that the server issues are mostly fixed, that condemnation has stuck around. Suddenly all I’m seeing are posts about the flaws in the game, and if you comment on one of these posts saying you enjoy the game…well it’s like throwing a de-clawed kitten into a tank of hungry sharks. The mob turns on you and rips you apart. I speak from experience. You’ll be told how stupid your are, or you’ll be accused of being a Maxis ‘plant.’ If your opinion differs from that of the Mob, YOU are invalid.

It irks me. With the server issues cleared up this is essentially the same game that was so favorably reviewed. How could it have been a great game a few weeks ago but total dreck now? It can’t. Either the reviewers didn’t really play it critically before launch and now that the general populace is playing, we’re essentially exposing what a crappy review job they did, or they’re mad at EA (or just piling on) and so picking apart the game to find things to fault it for. Trashing SimCity now is an easy way to rake in the ad impressions, after all!

Please understand that if you’ve actually played SimCity and you honestly don’t like it, I have no beef with you. In fact I’m sorry that you didn’t have a chance to get into one of the beta (aka demo) weekends to try the game out before you bought it.

But if you’re one of these people who were super-psyched about the game based on reviews before release, and now you’re trolling comment streams talking about how much the game sucks and EA sucks and blah blah blah based on the gaming sites pulling a 180 and now slagging the game…here’s an idea: grow a damned backbone and try thinking for yourself for a change. If you can’t get first hand experience then just stay out of the comment threads because you can’t know what playing the game is like if you haven’t played it.

Now, let me try to leave on a more constructive note.

SimCity is called SimCity. It isn’t called SimCity 5. If you’ve played SimCity 1-4 and loved how they became increasingly complex over the years, you probably won’t like the new SimCity. This is a reboot more than it is a sequel and it plays more like a simulation of being a Mayor rather than a God-Game. You plan the city but you don’t have to drill down to the minutia of where to run power lines or water pipes. Much of that kind of thing is abstracted. This is part of why I like SimCity and didn’t like SimCity 4. By the time Maxis got to #4 the game felt like too much of a chore for me, in the same way I never liked The Sims back when you had to tell each little person to use the toilet or else they’d just piss on the floor. Must I do EVERYTHING around here!? 🙂

If you need to win, I’m not sure SimCity is a good fit for you. You can make a ‘winning’ city without using a lot of the tools at hand. For instance, the new curved roads tend to be more fun to use than efficient, in the same way stacking bricks is a lot more efficient than stacking bowling balls. But the curved roads can be fun to use. Also there is no “winning” condition so why box yourself in by min-maxing things?

Also as mentioned there are still bugs. Sometimes you have to work around them, or you can just choose to slam your head into the wall instead until you hate the game and your family and your dog. Your choice, but if you’re a wall slammer I suggest giving Maxis a few months to polish out the bugs. You’ll probably save some money too.

SimCity feels like it’s 65% game and 35% software toy. There’s definitely challenge here but there are also ways to circumvent the challenge or break your city due to bugs. You need to be flexible and have a certain sense of whimsy to really enjoy it, I think. Use features based on whether you think they’re fun or make your city cooler, rather than based on if they’re the most efficient way to play.

2) If you haven’t play the game, you don’t know what you’re talking about so stop yammering in comments and making yourself look ignorant

3) The game requires an Internet connection. If you don’t like that, vote with your wallet and don’t buy it. Not liking it doesn’t make it OK to steal a cracked version. If you do that, you’re just a stinking scumbag. Plus you’ll miss out on: