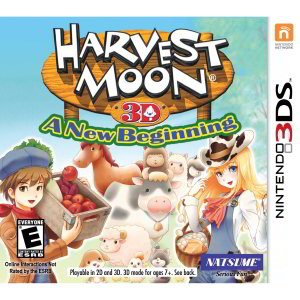 For Christmas I got myself a 3DS XL and the first game I bought for it was Harvest Moon: A New Beginning. I’ve been playing it off and on since Christmas and figured it was time to talk a bit about it and about the 3DS itself.

Generally speaking I’m pleased with my new gaming hardware. The 3DS XL is “fun” in a way that few game consoles are. I mean even without loading a game into it there’s stuff to do, like put your Street Pass friends to work clearing a dungeon. Luckily I got Angela her own 3DS XL so we can be each other’s Street Pass friend. You can put the thing in your pocket and take a walk and earn “Coins” that you can use in the same game. You can send goofy notes to your friends. It’s a nice system. That said, the 3D aspect feels like a gimmick and neither of the screens can hold a candle to the one on the Playstation Vita.

My only real gripe with the 3DS so far is that even in it’s XL format it feels a little small when it comes to the controls. My right thumb, in particular, cramps up a lot from hitting the face buttons; it’s not a system I could spend hours using. But since it’s a handheld I probably wouldn’t anyway.

Now, on to Harvest Moon. If you’ve ever played a Harvest Moon game you’ll feel comfortable here. Same old basic game: you have to re-build a farm, planting and harvesting crops and raising animals. In the meantime you have to befriend villagers and help the town grow and ideally, find yourself a spouse. If you haven’t played a Harvest Moon game this likely seems really boring. It’s a quirky genre, for sure. Kind of a mix of virtual world and survival game (though you can’t actually die as far as I know) and I guess dating simulator.

This particular Harvest Moon changes things up by starting you with an intact though small farm and an almost empty town. You need to liven things up in order to get people to move in. So you have both a farm and a town to rebuild. That’s the good news. The bad news is that for the first 25 or so “days” of gameplay you’ll probably be bored stiff. Most of the other Harvest Moon games I’ve played have made you clear out debris from your fields as a first step while trying not to exhaust yourself. A New Beginning gives you a pristine farm and very few chores to do.

You get up at 7 am (I think?) and head out to tend your crops. You’ll have that done by 9 am or so, after which the only thing to do is walk through the woods collecting bugs, logs, rocks, flowers and herbs that you’ll later need to build things or to use as gifts. This is fun the first few times but then it starts to feel like a chore. Generally for the first few days I was going to bed (and thus ending the game day) by 1:30 in the afternoon.

After a week or so you get a cow and that actually makes things worse since you have to push the cow out of the barn in the morning and push him back in at dusk. Cows are happier when they get to graze outside. It’s nice to have one more thing to do but once you have a cow you can’t go to bed super early because you have to leave the cow outside until near dark (I assume that the longer they are outside the happier they’ll become). There were times when I’d put the 3DS down and read a book while I waited for time to pass!

To make a long story short, the game is pretty dang slow until the 25th day of Spring in your first year. That’s when an architect moves into town and then you can start buying blueprints and building new features, and the game becomes much more enjoyable at that point. But wow, what a slog to get there!

In fact I’ve just gotten there and I’ve been trying to scrounge up the Mint I need to build a Chicken Coop so I can buy a few chickens to raise. Don’t ask me why I need mint to build a chicken coop but it’s nice to have things to do other than tend the handful of crop patches I started out with. I can also now edit the farm to move things around, which means there’s a reason to chop down trees and so forth. And I really want to craft a Bell so I don’t have to push the cows all over the place.

I guess this post isn’t going to sell you on Harvest Moon: A New Beginning but I just wanted to share the fact that the 25th of Spring is the date you have to drive through the boredom towards, in case you happen to be playing and gave up before then. I would’ve given up had I not been warned in many reviews that the game is super slow at the start.