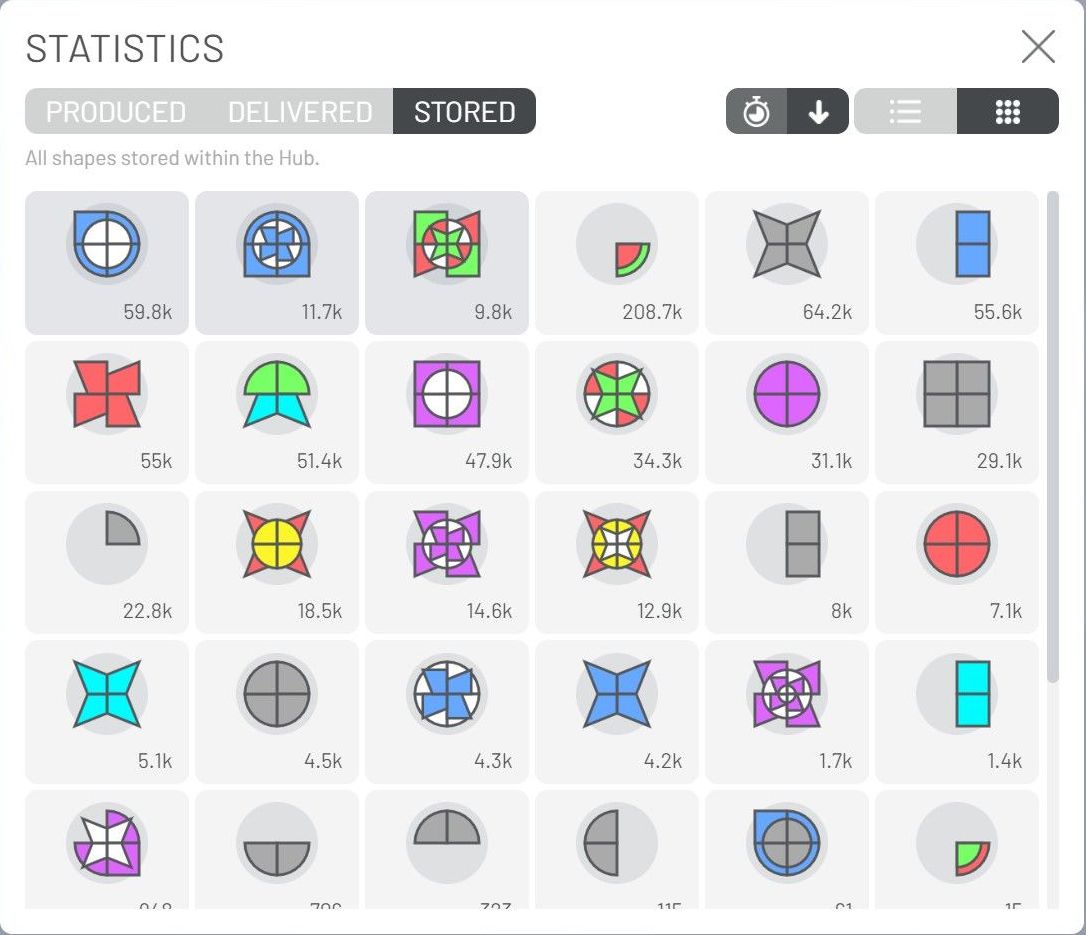 I mentioned that I’d stumbled upon a game called Shapez over the holiday break. It was my first factory, or automation, game and I really enjoyed it for quite a while. I feel like I’ve played it a ton but Steam says it’s been less than 13 hours. Still, for as much fun as I’ve been having, it might be time to move on.

What I enjoy about the game is figuring out the layouts to make the various required shapes. Building these elaborate series of cutters and painters and mixers and layer-ers is really fun. What I don’t enjoy is then having to duplicate these “machines” over and over in order to generate the numbers of items required. For instance right now I’m on level 17, and I have to deliver 20,000 of the requested shape. I either have to just leave the game running like an ‘idle’ game, or I need to duplicate my assembly line a bunch of times.

I’m currently generating 1 of the required shapes/second, which if my math is right, means the game would have to run for about 5.5 hours to meet my goal.

Here is what I have to make:

Here is the machine I have built to make these. I can’t fit the whole thing on one screen. I’ve added arrows pointing to the finish shape rolling off the assembly line.

That’s not even the whole thing, which I have to zoom way out to show:

Now to be fair, this ‘machine’ is wildly unoptimized. Given that I’ve generated about half the required number, I’m going to assume I’ve been playing for a few hours since I built it, and I’ve learned a lot about optimizing machines since then. I could probably at least double the output but still, that’s 2 hours & 45 minutes of running time even if I’m generating 2/second. [Edit: I fired up the game to take some screenshots and in fact did quickly optimize it to 2/second.]

Thing is, now that I’ve gotten a taste of this kind of game, I kind of want to move on and try some others. I don’t really have any issues with Shapez, aside from one.

Check out this image:

In a still image you can see that there are 2 similar but different shapes running on these belts. But look at it in motion:

When the game is in motion, my poor old eyes can’t tell these shapes apart, and there is no Pause option. [Even without all the artifacting that snuck into this video.] This wasn’t an issue early on but as I’ve earned upgrades the belt speed has increased considerably to where it is now hard for me to follow what is going on. This probably isn’t an issue for most gamers (who’re generally younger than me) AND there IS a mod that adds a speed control, apparently.

But again, this ‘factory game’ world is like a brand new candy shop and I don’t want to stick to just eating grape lollipops when there are so many other flavors to try. So I think this is the end of my time with Shapez for now. The developer is trying to secure funding for Shapez 2, and if that game becomes a reality I’d definitely be back for it.

It’s really a spiffy little game and well worth playing. It’s $10 on Steam and there’s a free demo. 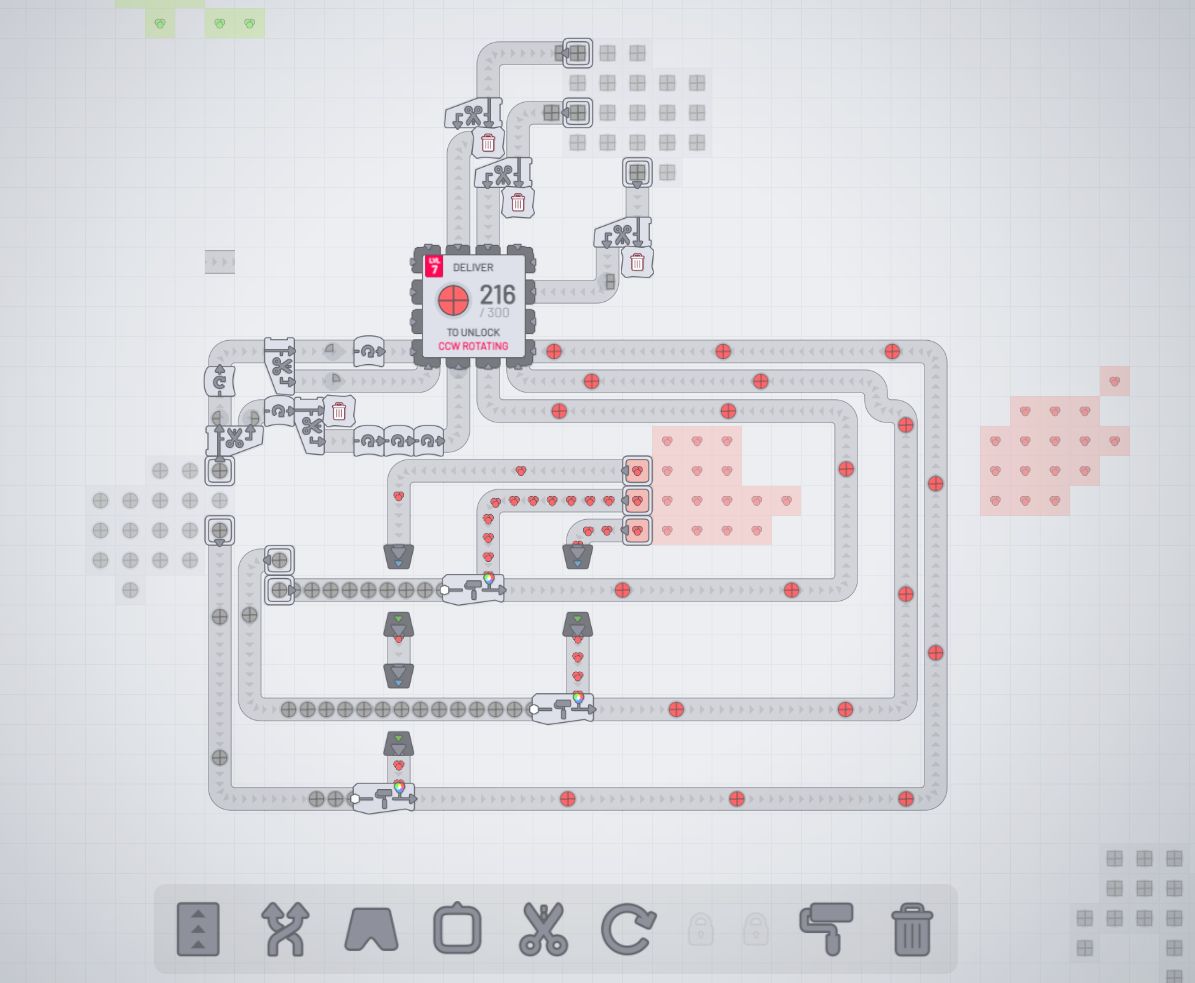 A long time ago in a galaxy… well, in this galaxy actually, I was ‘strategy gamer guy.’ Before we had home computers I entertained myself playing SPI and Avalon Hill wargames (y’know, the ones with a paper hex map and cardboard chits) so I guess the transition to strategy games on computer was pretty natural for me. In fact at Strategy Plus Magazine, during my stint there, I was Associate Editor of Strategy and War Games.

Somewhere along the way, I kind of dropped my strategy things and turned into RPG guy. I guess I’ll blame MMORPGs for that but the point is, it’s been quite a while since I dabbled in strategy games. But again, now I have a Steam Deck which means on some level I’m a PC gamer again, and I’m watching a lot of “Best Games on Sale on Steam” videos and I learned there are whole new genres of strategy games, including factory games. I realize I’m the last one to learn this, but bear with me. I was finding these games intriguing but kind of daunting.

Anyway, it’s pretty darned wonderful. I mean I’ve only played it for a few hours but given that it costs $2.99 US until January 5th, if I never go back to it again I’ll feel like I got my money’s worth. Also there’s a demo if you just want to give it a try for $0.00 US.

So basically you have a “HUB” and arrayed around it are piles of various shapes. Squares, circles, stars, etc. And you are given the task to move X of shape Y into the hub via building conveyor belts. It starts really simple, but then you get tools to do things like slice shapes in half, spin them, paint them, combine them and so on. So maybe you need a 1/4 blue circle and it has to be the top right quarter of the circle. So you start with a circle, run it through a slicer, run the resulting half circles through a second slicer, maybe rotate the resulting quarter circles to get them to be top right corners, and then run that through a painter. Or maybe do the paint first, then slice it up. You figure it out!

This might be a case where a quick video is worth 1000 words. Here’s my “machine” in motion:

You can see that painting really slows things down, causing quite a few backlogs. I’m still trying to figure out a way to improve that.

While you’re achieving whatever goal has been set for you, you can also unlock upgrades, such as faster speed, via delivering other shapes to the hub.

I don’t think there’s a fail state so it’s all pretty chill. There’s no economy to worry about so you can erect and tear down conveyor belts to your heart’s content. It’s almost more a toy than a game, but I’m finding it super fun, particularly for $3. And I feel like I’m getting my feet wet so I can take on more elaborate factory games in the future.

Recommended! Oh, and if you miss the Steam Sale, the regular price is $10 which still feels like a good deal.