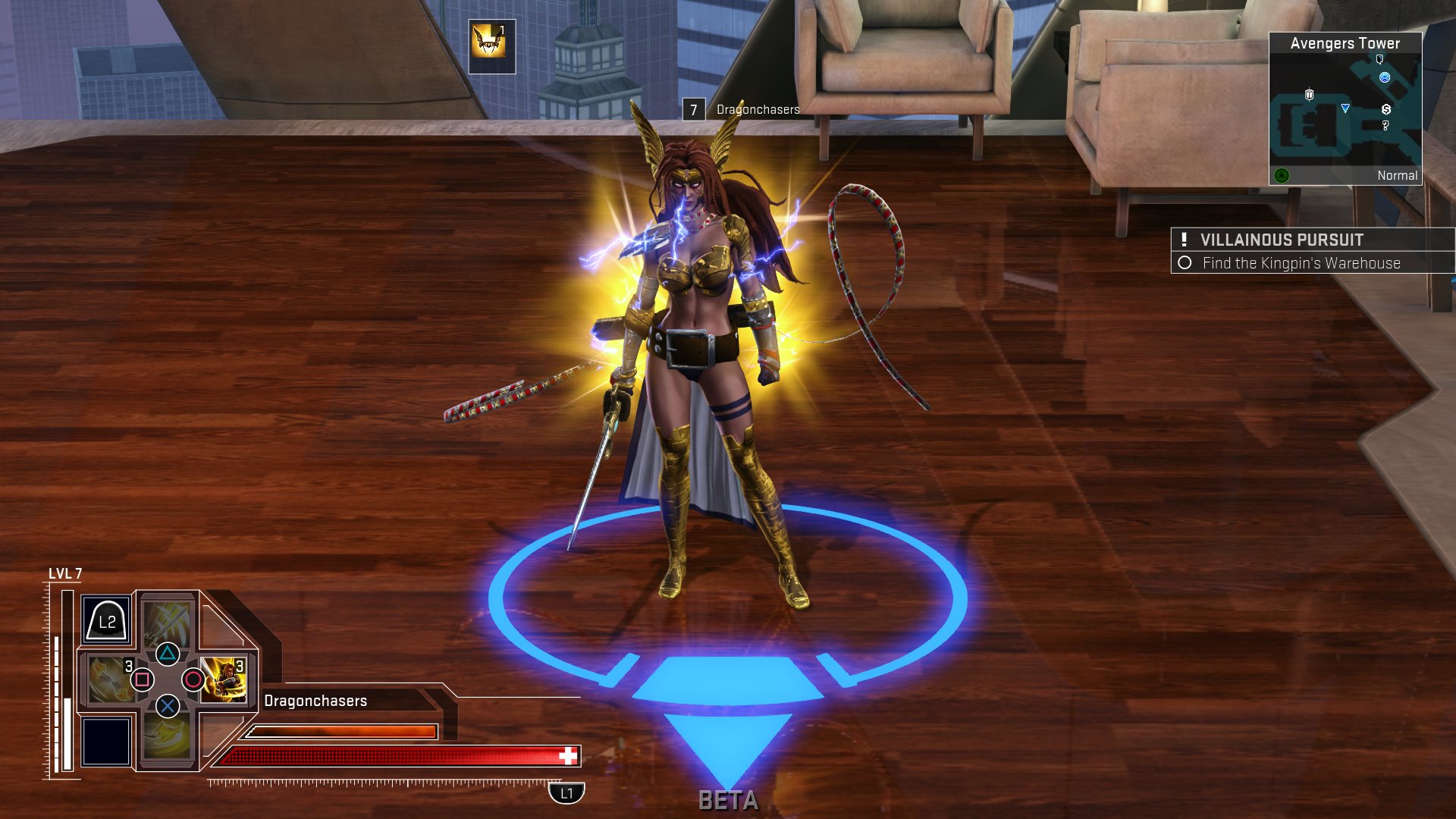 Everyone on PS4 can start playing Marvel Heroes Omega today! We hope. As of now it isn’t showing up in the store yet. You should be able to find it under Free To Play sooner or later. There ARE a bunch of Founder’s Packs available now that you can pay for, but at some point today a totally free option should pop up. It’ll give you Daredevil and then when you finish the tutorial you should get enough Eternity Splinters to buy a 2nd hero. Maybe not any hero.. a few carry a premium price. But most will be affordable.

[UPDATE]It’s up now. Here is the link to the beta in the store.[/UPDATE]

[UPDATE #2]There’s a separate link for Daredevil in the store. Not sure if you need to ‘buy’ him (he’s free) separate or not, but here it is.

And if you’re a PS+ member you can get a free “Man Without Fear” costume for him, too.[/UPDATE #2]

Sorry for the inconvenience guys! We are looking into the store page for our game. We will update you asap. Thanks! https://t.co/7AlZqPoXIZ

There won’t be any more wipes so even though its Open Beta you can play it like its launched.

I finished out Early Access at level 47 or 48 and having completed chapter 8 of the 9 chapter campaign. I stuck with Angela. If you’re looking for an easy-mode hero that is cheap, Angela is for you. I think she cost 250 Eternity Splinters (most heroes are at least twice that) and I think the first time I died was at level 35, and then mostly because I wasn’t paying attention.

Doctor Doom, the final boss of chapter 8, was a different story. I died to him a few times before I finally took him out. He dropped a level 52 item though, so I guess maybe I got there ‘ahead of schedule’. Fun battle though. Lots of dodging and weaving and the bastard has the audacity to heal himself!

Yes I guess that’s a spoiler but really the story here is pretty basic; I don’t think anyone is playing this game for the narrative. It’s just a mechanic used to walk you through different regions of the Marvel universe to do battle. I’m actually looking forward to finishing the story because then I’ll start doing all the side-stuff that I’ve been ignoring. (Stuff unlocks pretty early…I just opted to stick with the story.)

I bought a Founder’s Pack that came with Spiderman and 500 Gazillion Bux, or whatever the currency is called. I spent 200 of those to expand my inventory once. I’m thinking of buying more Gazillion Bux to expand my stash just because I’m a pack rat. But really you don’t have to do these things. Pretty early on you unlock “Body Slide” which is the Town Portal of Marvel Heroes and it becomes quick and easy to go back to a base to sell off your excess gear.

Once I get Angela to 60 I’ll level up Spidey, I guess. We’ll see. I have enough Splinters to buy someone else, too. The desire to “collect ’em all” is strong in me. 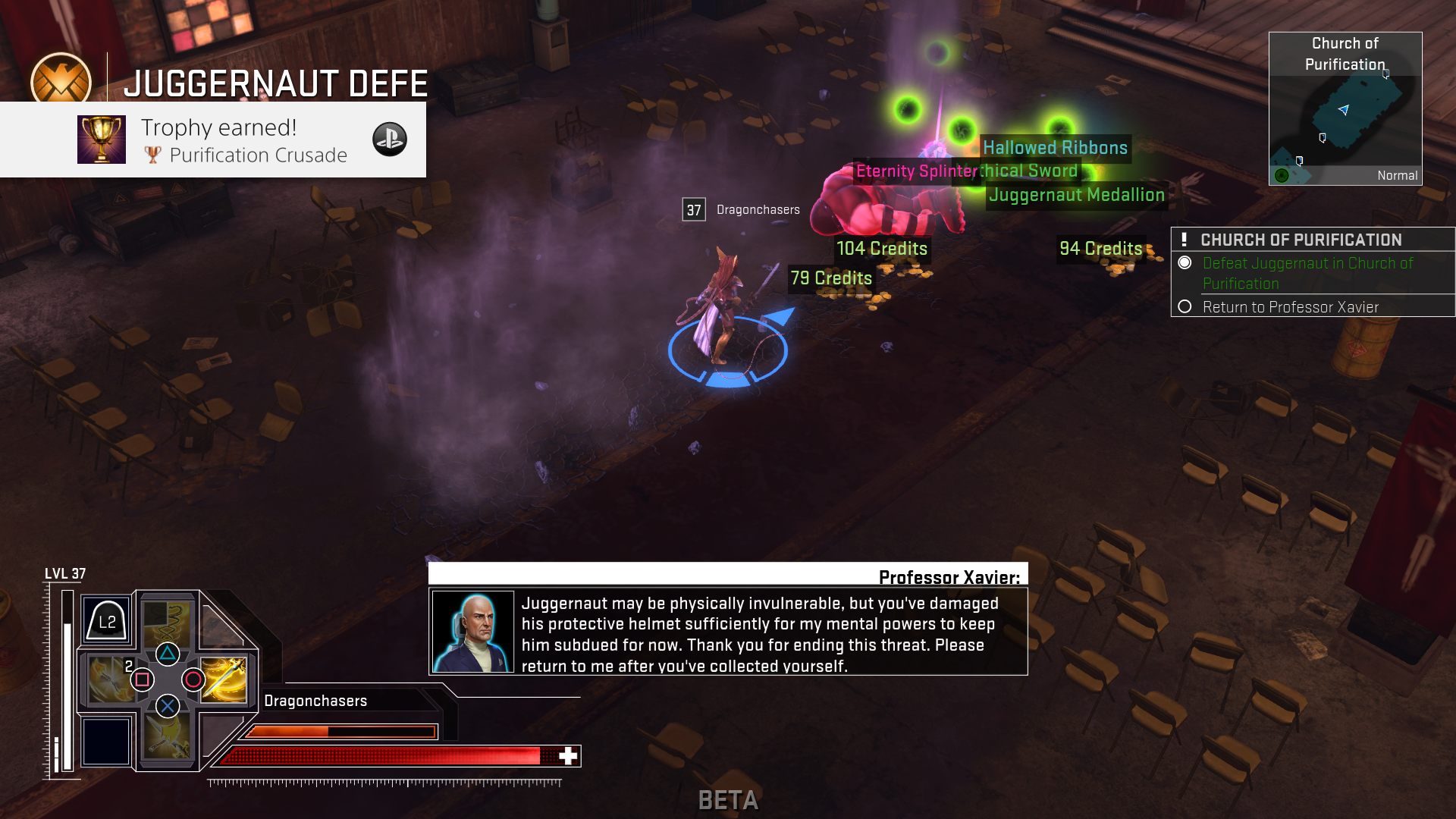 Open beta for Marvel Heroes Omega starts next week, but if you were in the closed beta you get to start today. I was and I did. Everyone else can play free I believe on Tuesday.

I’m really enjoying this game. I know all my PC gamer friends have been playing Marvel Heroes since forever, but for some reason my PC and Marvel Heroes never got along, so even back when I was playing PC games I never got a chance to play much of MH. But the nature of this game just makes it ideal (to me) as a couch game. In fact it supports couch co-op so you and a friend can play together, side-by-side.

If you haven’t played Marvel Heroes in a while, you may be surprised to learn that the whole “Level up, earn points, spend points” system has been replaced. Now you just unlock powers as you level from 1-30 and don’t have any choices beyond what keys to bind powers to. I WANT to complain about this since it “dumbs down” the game, but in practice I like this just find. This is just a fun game to me and I’m OK if I don’t have to research builds or what not in order to have a good character. There’re systems beyond powers that kick in much later in the game and maybe that’s when you have to start thinking hard about what you’re doing, but early on it’s just a casual hoot.

There was one glitch with the launch of early access, in case you hear stories about this. When you create a Marvel Heroes account, you get a bundle of “Eternity Splinters” to spend on a hero. Between closed and open beta they bumped up the cost of Heroes, but they forgot to bump up the amount of Eternity Splinters they gave new accounts. That meany very few heroes (2 I think) were affordable for new accounts.

Gazillion realized their mistake pretty quickly and gifted affected players with an additional 500 Eternity Splinters, so we actually made out. I’d purchased Angela (from Spawn, I’m told) since she was cheap, but now I have enough Eternity Splinters to buy another hero.

Of course everyone is mad at Gazillion but it wouldn’t be the Internet if they weren’t. I’m not. Like I said, I feel like I got a bonus and I’m enjoying playing Angela.

So far, servers seem stable, everything else is working well. People are grinding through mobs and busting boss-loot-pinatas and it’s just a gas. I can’t wait to play more. Hopefully everything will stay as solid when the doors are open and everyone comes rushing in.