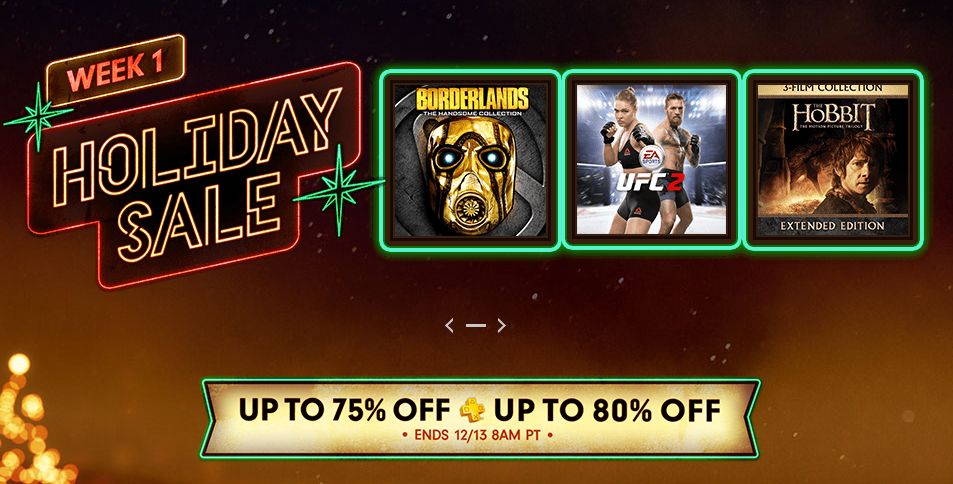 Sometimes (maybe oftentimes) you see things online that you just can’t believe. One of the less consequential is this weird idea about game sales I keep seeing crop up. There are people who seem to honestly believe that digital games never go on sale.

Now first of all, in this age of Steam sales that blow-up social media, I have to assume these people are talking about console games. I mean arguing that PC digital games never go on sale is like arguing that nights are brighter than days, right? And once upon a time it was true that digital console game sales were pretty uncommon but that was a LONG time ago.

I most recently saw this fallacy in two places. First was in the comments of a clickbait-y post at The Verge: Consider the PS4 Pro before you buy that expensive gaming PC. OF COURSE the gaming public took the bait and commented furiously on this post, as I’m sure was the intent. (I can just picture the author giggling as the pageview count skyrocketed due to people refreshing comments so they can argue with each other — he met his weekly pageview quota with one nice chunk of clickbait.) And people in favor of a PC over the PS4 Pro made a lot of good points (its a ludicrous idea, suggesting the PS4 Pro can achieve what a high end gaming rig can), but one theme that cropped up a couple times is game prices:

“On console, games never get steeply discounted.
I bet I’ve actually paid a lot less overall for my PC and games than console users have. I would never be buying and playing as many games if I was on console”

[Update on what follows: I totally misunderstood the point this blogger was making (see comments). He was talking about how retailers (3rd party retailers like Amazon) seem able to offer discounts on physical copies of games, but not digital copies. And yeah, I’ve always been wondering about why that is too. So this whole (needlessly snarky, upon re-reading) next chunk of this post is based on my misunderstanding of this point.]

Then today I was reading a random blog, and I don’t know the author so I don’t really want to link to him/her and get into a big argument over how I called him/her out, but here’s what I read:
[Doh, it’s Azuriel’s blog and now that he’s come forward, here’s a link to the post.]

OMG, tin-foil hat much? [Nope, just me not thinking things through.] What’s funny is this person was talking about Black Friday sales. They’d bought a recent game for $30 physically because there are no digital sales at about the same time I was buying Titanfall 2, digitally, for $35. Where I come from, spending $35 for something that is regularly $60 is a sale. And I didn’t pay tax or have to deal with Black Friday crowds.

The truth is digital games go on sale ALL THE TIME. Right now PSN is running a holiday sale offering up to 75% off for the public, up to 80% off for PS+ subscribers. Every week Sony rolls out new deals, and Microsoft does the same thing. Even Nintendo has digital sales sometimes, I think.

Now I understand that there are MORE PC game sales and the discounts can be even steeper than what you get on consoles. I expect that is mostly due to competition, both in the fact that there are so many PC games vying for your attention, and the fact that you can buy from Steam or from Green Man Gaming or some gray-market reseller, or you can just pirate. So if you want to make the argument that PC games often get discounted more deeply than console games do, I’ll grant you that.

But to say that digital games never go on sale is just lunacy and it bugs me. On the off chance that you’re so ensconced in PC gaming that you actually believe this fallacy, well now I’ve educated you. In fact buying console games at launch for full price is just as silly as doing the same thing on PC because ALL games drop in price, most of them after a month or so. (Call of Duty and Grand Theft Auto both seem resistant to this trend; they hold their full price for a long time.)