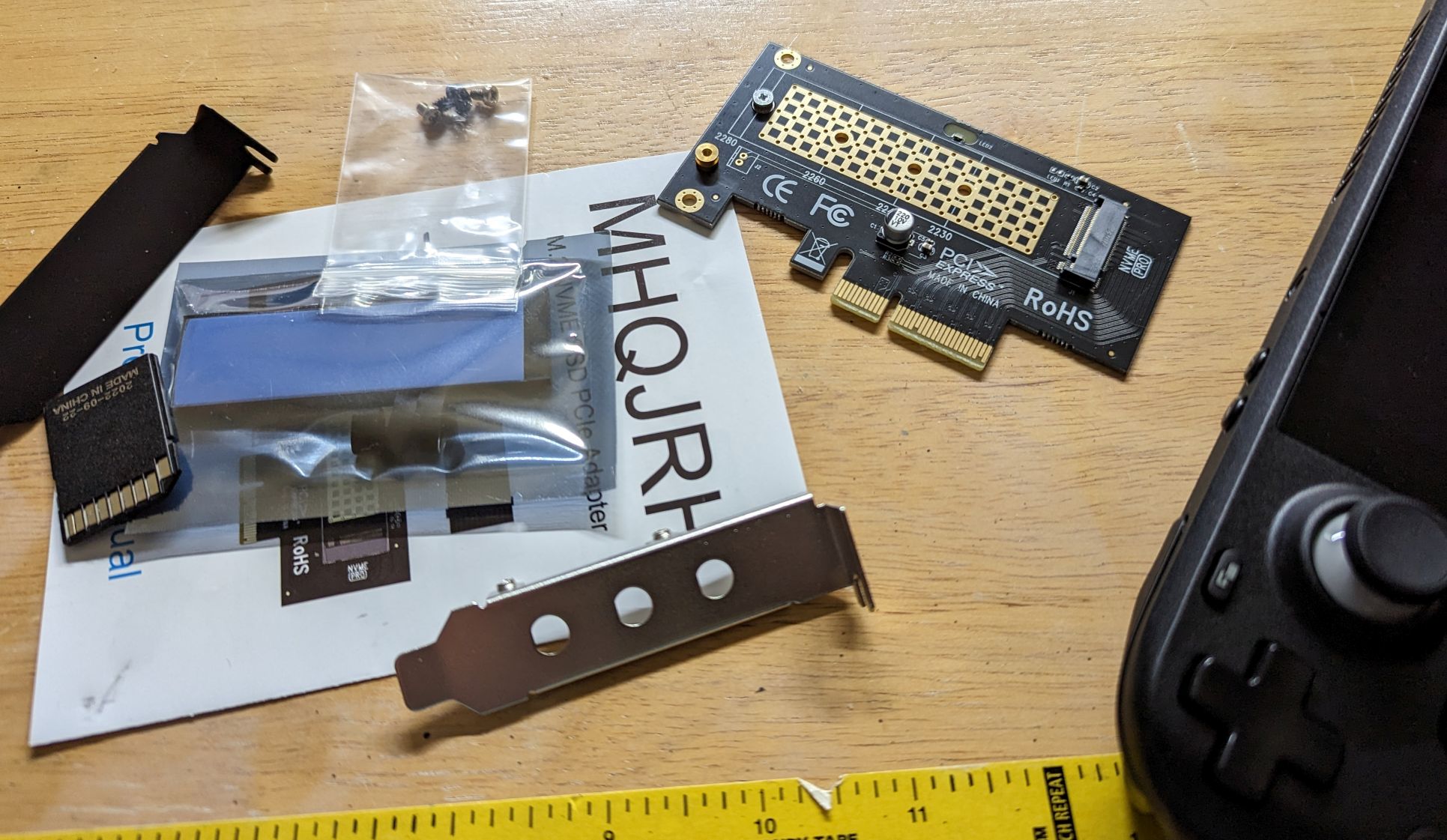 I might have been a bit over tired when I came up with that headline but I’m leaving it, by gum!

So a while back I bought a 2 TB SSD for the Playstation 5. Why? I have no idea. Because I’m dumb. I don’t need that much space but it was on sale. This was back last summer. Anyway I bought it, and swapped out the 1 TB that I already had in there. That 1 TB SSD has been sitting on my desk ever since.

My gaming desktop, in the meantime, has a .5 TB SSD and a 1 TB HDD. Whether it is because games just expect an SSD these days, or if the PS5 and Xbox Series X have spoiled me, loading times for games I was running off that 1 TB platter drive just seemed dreadful. Obvious solution, repurpose the 1 TB SSD that I’d pulled out of the PS5.

It could have been as simple as opening the case, plugging the drive into an available m.2 slot and be off and running. But it wasn’t that simple. My motherboard didn’t have a 2nd m.2 slot. Turns out you can get a PCI card that provides an m.2 slot so I ordered one. It came and I opened the case again and… hey wait a minute, I don’t have a PCI slot either. Well, not one that I recognized. Apparently motherboard design has changed in the maybe 15 years since I last cut my knuckles on the guts of a PC.

It turns out I had a “single lane” PCI slot, but I’d purchased a “4 lane” PCI card. Fortunately it was like $13. Back to Amazon I went and found a single lane adapter card (this one was like $8). That worked. Mounted the SSD on the card, stuck the card in, turned the system on and…. nothing.

OK let’s check the BIOS. Restarted the machine, held down DEL. No BIOS. Tried again holding F2. No BIOS. F1? Nope. F10? Nope. How the hell do I get into the BIOS? New learning opportunity. You can access it via Windows when all else fails, by using Advanced Startup in the System->Recovery options.

Finally got into the BIOS and yup, the drive is showing in the BIOS so what could be wrong… oh wait, it’s formatted for the PS5. Duh. On to the Disk Management app. This at least still looks the same as it used to look, once I remembered that it existed. Took a few minutes to format it, create a partition and assign a drive letter and voila! Now I have 1.5 TB total SSD space.

But here’s the dangerous bit… doing all this was, dare I say it? Fun. And kind of satisfying. And now I kind of want to do more. I’ve been seriously considering building a PC. I figure part of the frustration of working on a PC is that while you’re working on it, you don’t have a PC, right? But if I build a SECOND PC it should remove all that stress and frustration and it could be fun. I mean there was a time in my life where I really enjoyed tinkering in the guts of a PC. It’d be really nice to learn about all the new tech and stuff.

Really the only drawback is that everything tech-related is so damned expensive these days. Like I guess I could build a really cheap gaming PC just to build it but then what? Stick it in the closet? So I’d really want to build an upgrade to what I have (an i7-9700F @ 3.00GHz and an RTX 2070 SUPER GPU) which I’m assuming wouldn’t be cheap.

So I probably won’t do anything other than live vicariously through watching YouTube PC build videos. Maybe when I hit those lottery numbers…

Why the heck does everything have to cost money!?