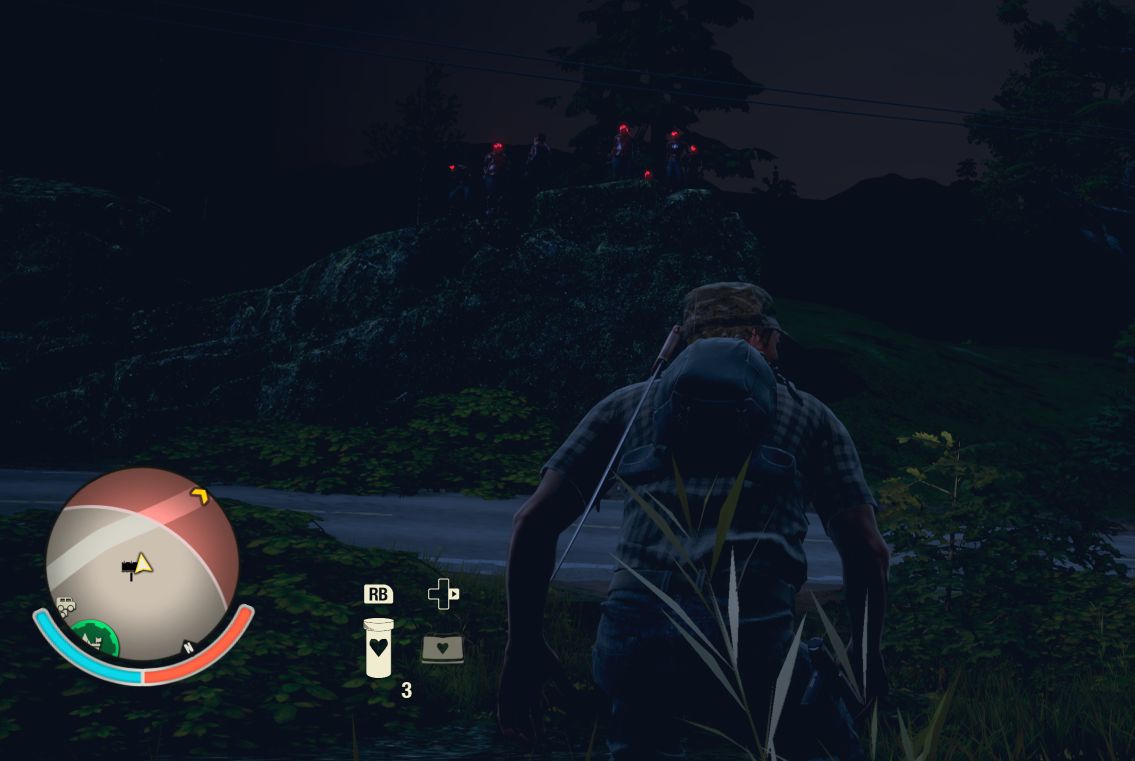 I love stories. I always have. I love to read fiction, I love to watch TV, I REALLY love sitting around a dinner table or at a bar, trading stories with people (I have dim memories of doing this decades ago). And of course I love stories in games.

There are games that have a story baked in. Narrative-driven games, as I (and I think most people) call them. Then there are games with the kind of emergent gameplay that wind up telling a story through player interaction. I think I’m saying all that right; I’m no game developer.

Anyway to set up this story I have to tell you a little about State of Decay 2. It takes place in a zombie apocalypse. There is no official ‘fast travel’ (though I think you can cheese your way around that a bit). You have a group of survivors you play as, one at a time. Some zombies carry a ‘blood plague’ and when they hit you, you get a dose of the blood plague virus. Get enough of these and now you have the blood plague, which left uncured, turns you into a zombie. There is a literal timer that ticks down to zombification. There is permadeath and finally, your band of merry zombie slayers has a leader who (I presume) is more important than the rest of the group. If I sound a little iffy about some of these points it is because I’m still in my first game and I don’t know how everything works.

So our leader Mary was trying to take out an infestation far, far from home base. She and one of her minions had driven across the map in an SUV. Things went badly. The pair were swarmed by blood plague zombies. Mary called for a retreat and they ran, but in the confusion they’d forgotten where they parked. A running battle ensued. Mary was soon out of ammo for her sidearm. Then her baseball bat broke. All she had left was 3 crossbow bolts. The crossbow was a slow weapon. Perfect for sniping but not much use in a running battle.

They finally made it to the car, but by then both had the blood plague. Their only hope was getting back to base as soon as possible. And just to add to the fun, it was getting dark.

Mary jumped behind the wheel and took off, driving as quickly as she dared. She came around a bend and tried to squeeze the SUV between a wrecked truck and a guardrail and BAM, they didn’t make it. The SUV wedged itself in. Mary tried to back away but the wheels just started spinning. The SUV engine was drawing zombies.

Their luck had not completely run out, though, as nearby was a van that looked like it might start. They abandoned the SUV and ran for the van, fighting a few zombies and taking a few more wounds. Mary was slowing down, but they reached the van. It started, but only just. It was nearly out of gas.

They drove on into the night, Mary being much more cautious now. She was trying to conserve fuel but base camp was still a long way away when the van sputtered a final time and coasted to a stop, the tank dry.

Back on foot, they stumbled through the night. Mary used her final crossbow bolts to clear a path. When those ran out they had to rely on stealth. She was on death’s door, not just from the plague but from the many wounds she’d received. It was a long, frightening walk, but they finally stumbled into camp where other survivors immediately helped them to the infirmary to get the plague treated and wounds attended to.

They survived to fight another day.

It might not read that well, honestly, but playing through this was such a tense and enjoyable experience. In game mechanic terms, we tried to take out a Blood Heart which drew in a ton of zombies. She was taking too much damage so we ran, but I didn’t have time to open the map to see where I had parked. Mary really did run out of ammo and her melee weapon did break. She ran out of healing items and her HP was blinking red at maybe 5% full. It was just a sliver of health.

The SUV did jam tight between a wreck and a guardrail which might be a bug. When I got the van I tried to push the SUV free but the ‘wreck’ was part of the terrain: completely immobile. Vehicles have Hit Points and the van, too, was almost at zero. I actually had a repair kit, so we took time to repair it and found it was almost out of gas. We didn’t make it back. Working vehicles are fairly rare in SOD2 and we didn’t come across another one.

The rest was pretty much as described. At low health your character starts to limp and hobble along. It was really dark out and I could see the glowing eyes of zombies all around us. It took a LONG time to walk back since we had to crouch and sneak around swarms of zombies, but the “Blood Plague” timer is more generous than I realized and truthfully it had only ticked down to maybe 50% by the time we got back to base.

The biggest loss was the SUV, but we do have a couple of trucks. I’m not sure what would have happened if Base Leader Mary had died.

All in all, it was really fun. I’m a terrible blogger so I didn’t take any screenshots… I was too intent on not dying!

2 thoughts on “A State of Decay 2 Story”