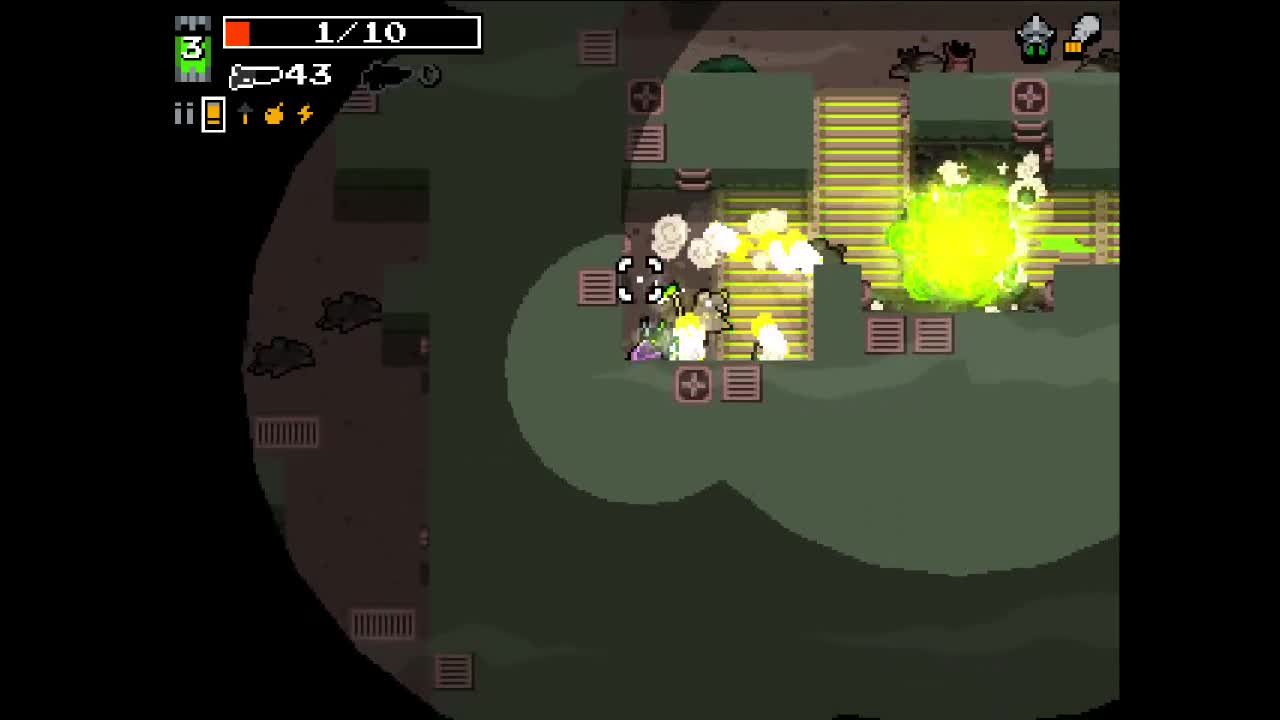 Nuclear Throne is an early access game by Vlambeer. I’ve been trying to resist the temptation of Early Access games, but I won my copy of Nuclear Throne on Forge.gg and was happy to find that the game is finished enough to be playable and addictive.

Nuclear Throne taps into several current trends in the indie gaming scene. It has procedurally generated levels, a modern 2D retro aesthetic and it is a difficult game. When you start the game you can pick from one of several characters, each starting with a different weapon and having a different special ability. The game is played from an overhead viewpoint, WASD moves you, space toggles between weapons, and the mouse is used to aim and fire (left button) or trigger your special ability (right button).

So you run through the level, shooting all the baddies which drop experience vials (they look like vials to me) which you then have to collect before they vanish. Thus you can’t just find a corner to hide in, really. You gotta get out there and collect those drops! You’ll also find chests that contain various types of ammo and/or additional weapons. When all the bad guys are dead a vortex opens and sucks you down to the next level. If you’ve gained enough experience you get offered a random selection of ‘mutations’ that you can pick from. Mutations do anything from really basic stuff, like let you carry more ammo, to weird stuff like making you impervious to fire when you’re under 4 HP. The goal of the game is to get through 7 sections and reach the Nuclear Throne and then.. I dunno, I haven’t gotten anywhere near that point. Each section is broken up into 3 subsections (1-1, 1-2, 1-3, 2-1, 2-2, 2-3 etc, just like in the old days) and I’ve never made it past 2-1. /blush

Nuclear Throne is damned difficult, at least for me. I shouldn’t like it given my predispositions. Every time you die you start over at level 1-1 again. This should, and does, breed frustration in me and I’ve got issues with controlling my frustration. And yet I find the game to be super fun due to its most important feature. And what is that feature? A quick restart option.

OK I’m being slightly tongue in cheek, but not really. When you die you have two choices. You can go back to the main menu and think about what you want to do next, or you can hit R and in just a couple of seconds be back in the game shooting again. For me at least, this is important because it doesn’t give me time to sulk. There’s nothing liking dying in a game and then staring at a loading screen for 2 minutes before you can get back to the fun. That just feels like you’re being punished for failing. In Nuclear Throne the death screams of your in-game persona will still be rebounding off the walls of your office when you get back to the shooting. Well they would be if your in-game persona had a voice.

Of course what’s also important is that the moment-to-moment gameplay is so satisfying. And between the random levels, random drops and (I think) random mutation offerings each attempt feels different. You can even pick a random character to play, after which that random choice will remain every time you do a quick restart.

Nuclear Throne is on PC now for $13 (again, Early Access) and it supposed to be coming to the Playstation ecosystem at some point (PS4, PS3 & Vita) according to a post on the Playstation Blog from last May. I give it my thumbs up, if you’re into this kind of game.

Here’s a random gaming session. See how good I am at failing!